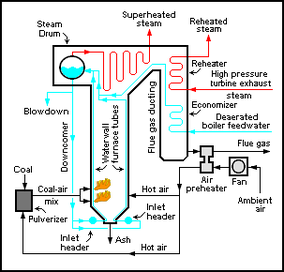 An air preheater (APH) is a general term to describe any device designed to preheat the combustion air used in a fuel-burning furnace for the purpose of increasing the thermal efficiency of the furnace.

The two most common types of regenerative air preheaters are

Regenerative air preheaters may also be categorized as recuperators, which are special types of heat exchangers designed to recover or reclaim heat in order to reuse or recycle it. 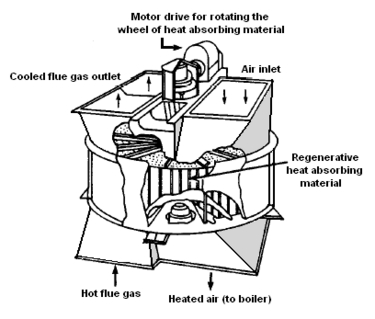 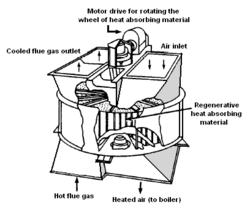 In the tri-sector design, the steam generator's hot flue gas flows through the largest sector (usually spanning about half the cross-section of the casing) and transfers some of its heat into the heat-absorbing material within the rotating wheel element. The cooled flue gas is then routed to further treatment in dust removal and other equipment before being vented from the flue gas stack. Ambient air is blown through the second, smaller sector by a centrifugal fan and absorbs heat from the heated material as it rotates through that smaller sector. The heated air then flows into the steam generating furnace as combustion air. The third sector is the smallest one and it heats a portion of the ambient air which is then routed into the coal pulverizations and is used to transport the coal-air mixture to coal burners. Thus, the total air heated in the RAPH provides: heated primary combustion air, heated air to remove moisture from the pulverized coal and carrier air for transporting the pulverized coal to the coal burners. Since the flue gas pressure is lower than the pressure of the air being heated, there is some small leakage (between the sectors) of flue gas into the air.

The bi-sector design is used in thermal power plants burning fuels (such as oil or gas) that do not require pulverizing or removal of moisture and therefore have need for heated air other than for combustion air.

The quad-sector design has a large sector heated by flue gas and three air-heating sectors: one is for the combustion air and that sector is flanked by two smaller air sectors. In applications such as circulating fluid bed (CFB) combustion systems where the differential between the air pressure and the flue gas pressure is even higher than in a conventional coal-fired steam generator, flue gas pressure, such a design is ideal since it acts to reduce the leakage of air into the flue gas.[6]

The rotating wheel element rotates quite slowly (around 3-5 revolutions per minute) to allow optimum heat transfer first from the hot exhaust gases to the element and then, as it rotates, from the element to the air in the other sectors.

The heat-absorbing material in the rotating wheel element consists of vertical corrugated plates pressed into steel baskets, with sufficient space between the plates for the flue gas to pass through. The plates are corrugated to provide more surface area for the heat to be absorbed and also to provide needed rigidity. The baskets are designed to be replaceable as needed.

The vertical shaft that rotates the wheel is supported on thrust bearings at the lower end lubricated with an oil bath that is cooled by water circulating in coils inside the oil bath. Cooling of the bottom end of the shaft is needed since that is where the hot flue gas enters the preheater. The top end of the shaft has a simple roller bearing to hold the shaft in a vertical position.

Radial supports and cages for holding the corrugated plate baskets in position are attached to the rotating shaft. Radial and circumferential seal plates are also provided to minimize leakage of flue gas or air between the sectors.

For cleaning of the baskets while in operation, steam jets are provided to blow any fly ash (deposited by the flue gas) into an ash hopper below the preheater.

The baskets of corrugated plates are subject to abrasive and corrosive wear from the fly ash and corrosive gases in the flue gas. Hence frequent replacements are required and new baskets are always kept on hand and ready for use. 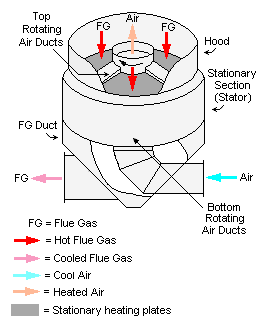 The heat absorbing element in this type of regenerative air preheater is stationary rather than rotating. Instead, the air ducts in the preheater are rotated so as to alternately expose sections of the heating absorbing element to the upflowing air.

The hot flue gas enters at the top of the preheater and flows down through those exposed sections of the stationary heat-absorbing element that are not blocked by the rotating air outlet ducts, thus heating those sections of the stationary element. As the air ducts slowly rotate around, they pass over the heated sections and the incoming air is heated as it flows upward through those heated sections. 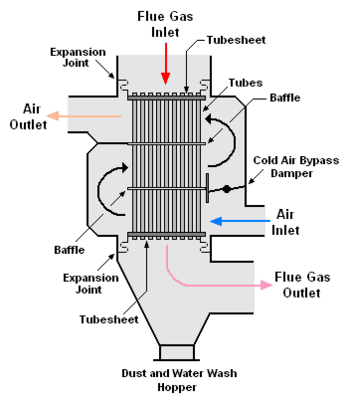 Tubular air preheaters may have a number of configurations:[2][8][9]

As a broad generality, the combustion flue gases from steam generators fueled by coal, fuel oil, natural gas, or biomass are composed of carbon dioxide (CO2) and water vapor (H2O) as well as nitrogen and excess oxygen remaining from the intake combustion air. Typically, more than two-thirds of the flue gas is nitrogen. The combustion flue gases may also contain small percentages of air pollutants such as particulate matter, carbon monoxide, nitrogen oxides, and sulfur oxides in the form of gaseous sulfur dioxide (SO2) and gaseous sulfur trioxide (SO3). The SO3 is present because a portion of the SO2 formed in the combustion of the sulfur compounds in the steam generator's furnace fuel is further oxidized to SO3 as the flue gas travels through the superheater and reheater sections of the steam generator (see the above diagram of a steam generator). The gas phase SO3 then combines the vapor phase H2O to form gas phase sulfuric acid H2SO4:[10]

The addition of limestone (CaCO3) into circulating fluidized bed (CFB) steam generators results in capturing 95% or more of the gaseous SO2 in the combustion product gases as solid calcium sulfate (Ca2SO4) and that occurs before the SO2 has time to be further oxidized to SO3. Thus, the acid dew point of the flue gas from a CFB steam generator is higher than from conventional thermal power plant steam generators. That means that the air preheaters in CFB units have considerably less dew point corrosion problems. That may also be one of the reasons why a number of the newer CFB units are using tubular preheaters.