Sudan is a nation in East Africa, which has the third-largest land area of any country in Africa. It gained independence from the United Kingdom, and has had near-continuous civil wars and local conflicts since then. The Second Sudanese Civil War first established, with the Machakos Protocol of 2002, a framework for agreement, and then, with the Naivasha Comprehensive Peace Agreement (CPA) in 2005, led to a treaty. The treaty included provisions for a referendum, in 2011, in which the then-southern region had the option to become an independent nation; the result was over 98% for independence.[1] The South become independent in July 2011. There is also an active struggle in the Darfur region in the west of the country, with the most important border being with Chad; elements of one of the rebel groups in Darfur attacked Omdurman, the sister city/suburb of the national capital, Khartoum, in May 2008. 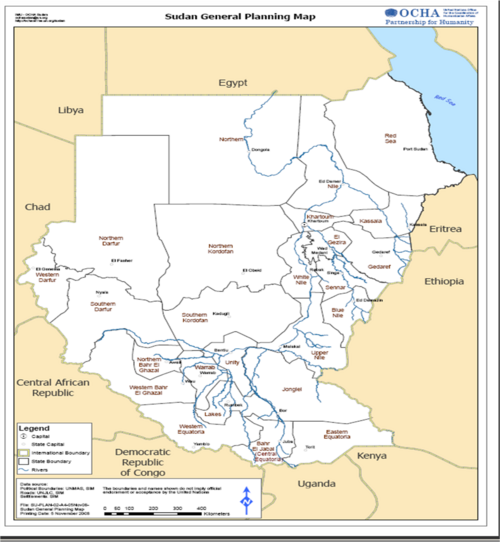 Both the Darfur Conflict and the Civil Wars are complex, mixtures of power, ethnic and sometimes religious struggles. Northern Sudan, which has historically held the most power, is Arab and Muslim, with Egyptian ancestry having the highest social status. The former southern region is much more mixed, with Nilotic and other sub-Saharan ethnicities, and a mixture of Christian, indigenous animist, and Muslim religions.

The main native groups of Darfur, while Muslim, are not Arab. As in the The Troubles, at least for the North-South struggle, religion and ethnicity are surrogates for political and economic power. It is no accident that the peace treaty is called the Power-Sharing Agreement.

The major political parties are:

In March 2009, the International Criminal Court issued a war crimes indictment against Bashir; a number of other officials previously had been indicted for crimes against humanity, primarily in the Darfur region. [2] This is the first warrant ever issued against a sitting head of state and the entire matter is evolving.

The Blue and White Nile rivers join to form the Nile at the Khartoum-Omdurman area. Sudan has significant internal river transport, and Port Sudan is on the Red Sea.

Before the discovery of oil in 1974, not exploited until years later, the economy was primarily agricultural. Gum arabic, used in a variety of products, was probably its most important export. 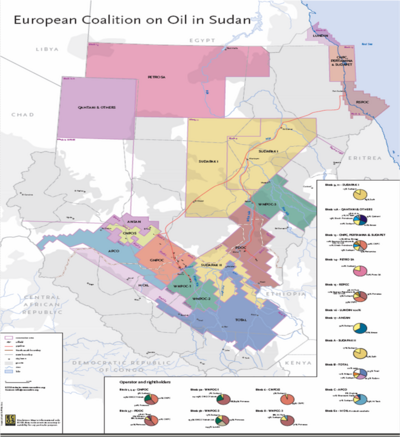 One of the factors in the conflict is the increasing significance of oil; Sudan is self-sufficient and beginning to export. Economically viable oilfields were discovered in 1974 by Chevron Oil, who did not pursue their concession due to security concerns.[4] Later, Western firms such as Talisman of Canada, established working fields in the South, centered around Bentiu, but eventually withdrew over shareholder human rights protest. The main oil consortium is the Greater Nile Petroleum Operating Company (GNPOC), with ownership split among the People's Republic of China, India, and Malaysia; Sudan has a minor share.

Actual oil drilling was centered around Bentiu in what is now South Sudan, but the only practical means of transporting it was a pipeline traveling north to a refinery outside Khartoum. Initially, the production of this refinery was devoted to domestic use, but export became possible by transport using road, rail, and possibly pipeline to Port Sudan on the Red Sea. Sudan's only seaport is equipped with an oil shipping terminal.

A politically and economically significant, if difficult, alternative being explored is to develop rail service linking Bentiu to railroad facilities in northern Kenya, which would take crude oil as far as the head of a pipeline in Kenya, and thence to a refinery and port at Mombasa, Kenya. While an experienced German firm has been ready to build and fund the railroad, there has been slow progress in getting Kenyan approval for the project. The oil facilities in Mombasa are in need of renovation.

If the South Sudan to Kenya alternative became viable, it would be an immense political-economic lever on the Sudanese government, which saw the southern deposits as a source of foreign income. There are no likely oil fields in the main areas of the north, although there are in the disputed border provinces of North and South Kordofan.

The country has been growing its industrial sector, much of it in well-designed facilities that make basic materials for infrastructure, such as concrete and steel, although there is some electrical and automotive parts production in the purpose-built Giad Industrial City. The Giad facility also assembles vehicles including Accent passenger cars licensed by Korea’s Hyundai Motor Co. (005380.SE), $100,000 heavy-duty trucks licensed by Germany’s Man AG (MAN.XE) and France’s Renault SA (13190.FR) for sale in Sudan.

Giad Automotive Co. had attempted to obtain capital by listing their stock on the Dubai Stock Exchange, but brokers refused to list them, possibly due to U.S. pressure. The company also makes military equipment, including a tank observed in Darfur.[5]

Sudan is a member of the Arab League. Before the Power-Sharing Agreement, Sudan's foreign policy was oriented toward Arab cooperation.

International economic policy, however, very much related to the participants in the Greater Nile Petroleum Operating Company, currently China, India, and Malaysia. Relations with France were complex, given both French oil concessions in Sudan, and that Chad is a French client. Since the oilfields are in South Sudan, the northern interests might be quite different if the South dealt with the oil operators.

Since the Agreement, however, the Southern interactions emphasize Uganda and Kenya, and has a good deal of interaction with the West as well as China and India. External Christian groups, at a final conference in Washington, D.C., helped resolve the internal conflict between Dinka and Nuer. There are mutual interests with Ethiopia.

While the Darfur Conflict has drawn the most world attention, there were more deaths in 2008 in South Sudan than in Darfur, along with more than 350,000 Internally Displaced Persons. These are primarily local and tribal conflicts, although there is a possibility of limited destabilization from Sudan. It was feared that the Government of Southern Sudan (GoSS) would cease to be viable before the self-determination referendum in January 2011. The International Crisis Group considered Sudanese destabilization possible but not probable.[6] The New York Times reported it as being more likely, mentioning a flow of weapons into the South.[7] Before the Power-Sharing Agreement, Sudan assisted the Ugandan-based Lord's Resistance Army against the South.

The worst violence is in the state of Jonglei, with an area of 120,000 km2 and a population of 1.3 million engaged primarily in pastoralism with seasonal migration. Roads and other infrastructure are largely absent, as is a secure food supply and access to justice. "The escalating conflict cycles witnessed in and around Jonglei in 2009 have sown deep mistrust, and movement during the dry season could reignite large-scale conflict".[6] An attack in September, against Dinka-majority Duk Padiet in Jonglei, was conducted by Nuer, who said "Dinka-led local government was blockading a road into Nuer areas and not allowing the Nuer access to the river. 'The Nuer felt the government was ignoring them,' said Solomon Pur, a Nuer youth leader."[7]