The Troubles (1969-1997) was the name given to a violent religious-political conflict that was centred on Northern Ireland, but also saw violence in the Republic of Ireland, Great Britain and mainland Europe. The origins of the Troubles can be traced back variously to several different periods in history, depending on perspective and context.

After the implementation of a Home Rule act was delayed due to the outbreak of World War I, governmental jurisdiction in Ireland was split into two regions: a Northern parliament comprising six counties of Ireland in the north-east of the island, and a Southern parliament comprising the a larger twenty-six county area. The nature of this division in legislation ensured a majority of Protestants largely loyal to the union looked after interests in the Northern parliament, while a majority of Roman Catholics, who had often historically been less loyal to the union, looked after interests in Southern parliament.

The history leading to The Troubles, is more or less synonymous with the history of Ireland itself. Causes for it are sometimes coloured by viewpoints, though certainly there had been conflict between the peoples of the island for as far back as history has been recorded. Due to it's location on the western fringe of Europe, and the expansion of different nations and tribes, Ireland had been invaded and settled by various Celts, then specifically by Gaels, and by Scandinavians, Scots, (Anglo-)Normans and English, each to various degrees. The Gaelic settlement was by far the most complete in terms of cultural dominance, but the English impositions in much later years essentially reversed this to a large degree.

Today it is often the case that nationalists blame The Troubles on the invitation of Anglo-Normans to Ireland by the king of Leinster to help with a local conflict in the 12th century, calling it an English invasion. Blame is also levelled at a sharp rise in the number of settlers from Scotland - the vast majority of whom were Protestant - in the 17th century, in a period known as the Plantation of Ulster.

In the context of the most recent period of violence and conflict, The Troubles emerged as a result of perceived socio-economic inequalities between the two communities of Northern Ireland. Successive Unionist governments, and the imposition of Direct Rule that followed the suspension of the devolved government, failed to resolve suspicions of deep-rooted institutional, governmental discrimination directed at the Roman Catholic community.

Initial concerns of a fledgling civil rights movement in Northern Ireland highlighted the plight of Northern Ireland's itinerant community. The right to vote in local elections was restricted to property-owning ratepayers, and the Northern Ireland Civil Rights Movement (NICRA) adopted this concern also. Many people saw this as benefiting presumed wealthier Protestants, over a smaller and less privileged Roman Catholic population. Those who owned properties in more than one electoral ward could have multiple votes, to a maximum of six. Due to the mobilisation of the police to combat what became regular rioting, police harassment became a fact of life for some in certain Catholic areas; the fact that the few Nationalist or Republican members of parliament in Westminster refused to recognise the partition of the island further alienated the community.[1]

The Civil Rights movement began in the mid 1960's. The original organisation, The Campaign for Social Justice, adopted the tactics of a pressure group, writing pamphlets and sending letters to MPs in Stormont and Westminster complaining of alleged discrimination against Catholics in regard to social housing, employment and Gerrymandering. Inspired by the U.S. Civil Rights Movement, NICRA was formed in January 1967. The group sought to end what it saw as being unfair legislation, and bring equality to all in Northern Ireland.

In mid 1968, NICRA began to organise street demonstrations to argue their case for equality. The organisation had failed to do much in the first eighteen months of its existence; the Unionist government was largely unresponsive to its complaints. It was encouraged by successful demonstrations in Paris, London and most importantly in the United States. Initial demonstrations were peaceful and had been supported by a small presence of Protestants and unionists, but many Unionists came to distrust the organisation as many believed that they were a cover for Republicans who wanted to destroy the Northern Ireland government and its state. Many Protestants and unionists abandoned the organisation after it took on a more militant role and was seen to be favouring a change to Northern Ireland constitutional status.

A march organised for Derry on 5th October 1968 was banned, but around four hundred people took part nonetheless. The Royal Ulster Constabulary broke the march up with batons. This incident had been filmed and angered Nationalists to the extent that the next march on the same route attracted some ten thousand demonstrators. 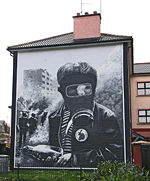 Mural depicting a young boy with a gas mask holding a petrol bomb during the Battle of the Bogside.[2]

The Battle of the Bogside in a Catholic part of Derry drew international condemnation of the Unionist government. The riot, which took place between August 12-14th 1969, was a result of the Apprentice Boy's of Derry attempting to march past the Catholic Bogside part of Derry. Although the police attempted to disperse the Catholic rioters, they could not enter the Bogside area as the Nationalists were throwing stones and petrol bombs at the police. Events were building around them however, as Irish Taoiseach Jack Lynch made a dramatic television appearance. He condemned the Unionist government and sent Irish troops to the border, where field hospitals were established. After a stand-off that lasted a few days, the exhausted police force were reinforced by the British Army, and the Nationalists called an end to their fight. Leaders who would prove to be big players in the Civil Rights Movement emerged from the 'battle': Bernadette Devlin McAliskey and Eamonn McCann proved themselves to be of great ability in the organisational aspects of the conflict. Martin McGuinness (who was to become Northern Ireland's second Deputy First Minister) was one of the young men throwing stones and petrol bombs at the police forces. He would later become an important IRA member and eventually spent some time in prison as a result of his actions.

Unionists tend to come from a Protestant background, and had both their fringe and moderate factions. Ian Paisley and Basil Brooke represented the former while Terence O'Neill, former Prime Minister of Northern Ireland, represented the latter. The unionist ideology is that of maintaining the union of Northern Ireland with the rest of the United Kingdom, and often has socialist roots despite a long-time alliance with the Conservative Party. Their pro-British nationalism is of a constitutional and moderate line.

Loyalists are overwhelmingly of Protestant backgrounds. Loyalists also tended to be of a more militant outlook and the term is usually used to describe those people who are members of, or supporters of, one or other of the various Loyalist terrorist organisations. While the term loyalist derives from a sense of loyalty to crown and country, modern loyalism started to take on it's specific militant form with the advent of the Ulster Volunteer Force of 1966. Loyalists also tend to lean heavily toward an anti-Roman Catholic opinion.

The ideology of loyalism is that of a militant defence of the union of Northern Ireland and Great Britain. Although often left-wing, loyalism has flirted with both left- and right-wing nationalist groups such as Combat 18 and the National Front.

Nationalists are most usually from a Roman Catholic background and the term is usually used to denote a more moderate ideology as compared to Irish Republicanism. From its formation in 1970, nationalism was represented by the Social Democratic and Labour Party (SDLP). The SDLP continued to campaign for civil rights during the Troubles, and abandoned the Republican policy of abstentionism from both Stormont and Westminster, serving in the 1974 power-sharing executive. They offered a path for moderate, Constitutional Nationalists to bring about change in a non-violent manner. The SDLP were until recently the most popular pro-secession party in Northern Ireland.

The nationalist ideology is firmly rooted in socialism. The SDLP moderated this also however, and has been criticised by former members for doing so. The ultimate goal of Irish Nationalism is the secession of Northern Ireland from the union, and the subsequent setting up of an all-Ireland state.

Republicanism is varied in its extremes. While there is a strong element of militant tendency, as exemplified by the Irish Republican Army, and an equally strong anti-British theme throughout, there are those within republicanism who are less inclined to the militant side. Again, republicans are overwhelmingly from a Roman Catholic background and republicanism has its roots in the left-wing. Sinn Féin and the Workers' Party have their roots in Marxism.

Republicans have historically rejected not only the constitutional status of Northern Ireland, but also that of the Republic of Ireland, often claiming that neither are legitimate. With the advent of the Belfast Agreement however, this has changed somewhat and has also caused further splits in the movement. Sinn Féin are now part of a coalition-style local government of Northern Ireland, sharing power with the party with the largest mandate, the DUP. Sinn Féin had previously overtaken the SDLP in terms of the largest pro-secession electoral mandate, after decades of abstentionist policy.

The party has slowly become more moderate in the last decade, accepting the new police service - the Police Service of Northern Ireland, which was set up following the Good Friday Agreement to replace the Royal Ulster Constabulary.

The Workers' Party, descended from the pre-1970 Sinn Féin have stuck firmly to a socialist ideology, though they achieve only a small amount of electoral success.

There were frequent peace movements in Northern Ireland during the Troubles, representing both sides of the community. Gordon Wilson, a Methodist, gave an interview to the BBC on the evening of his daughter's death from a bomb in Eniskillen, County Fermanagh in 1987. In an emotional display he publicly forgave the men that had killed his daughter, and pleaded with Loyalists not to avenge her death. At a time when the Troubles was becoming more intensive, Wilson became an international symbol of peace.

Other grass roots organisations, such as the Alliance Party achieved some minor electoral successes. The Peace process was masterminded by former leaders of the moderate SDLP (John Hume) and Ulster Unionist Party (David Trimble), who went on to share a Nobel Peace Prize for their efforts. John Hume had been in talks with Sinn Féin and representatives of the Provisional IRA as early as the 1980s, and had successfully liaised with Prime Ministers to persuade them to arrange 'secret talks'.

Prior to that, Betty Williams and Mairead Corrigan, after witnessing the deaths of an IRA member and three children, formed the Peace People, after bringing on board journalist Ciaran McKeown. Often it would be acts of selflessness from individual Ulster men and women on both sides of the community throughout the province, or a sickening of the level of violence, that would ultimately define the nature of the peace process.