Libya (Arabic: ليبيا‎, Libiya) is a state of Northern Africa, located between the Mediterranean Sea, Tunisia, Algeria, Niger, Chad, Sudan and Egypt. The capital is Tripoli. Libya has 1 759 540 km² and 6 461 454 inhabitants.[1] Its official language is Arabic.

Historically, and since Antiquity, Libya has been viewed as a country located west of Egypt with an imprecise extension. Some ancient Greek authors even used the name Libya (Λιβύη, Libýē) for the whole area of the African continent stretching between Egypt and the Atlantic Ocean.

In 2011, the Libyan state was divided between:

Pursuant to United Nations Security Council Resolution 1973, a coalition of nations began Operation ODYSSEY DAWN military operations against Gaddafi's regime in Libya in March 2011. The declared purpose is to protect civilians from the Gaddafi government. The U.S.-led ODYSSEY DAWN is transitioning to a NATO-led Operation UNIFIED PROTECTOR and a yet-unnamed, UN-authorized but non-NATO operation.

Libyan opposition forces took control of most of Libya by October 2011, with a key moment being the death of Gaddafi at Sirte. 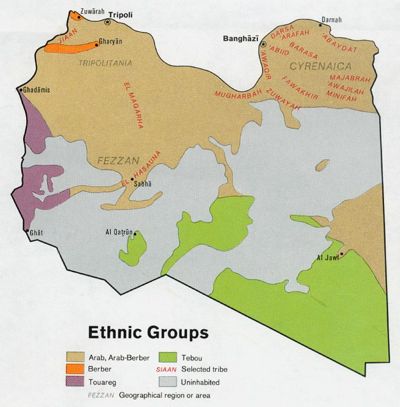 Population is estimated as under 6 million, 97% identified as Arab or Berber.