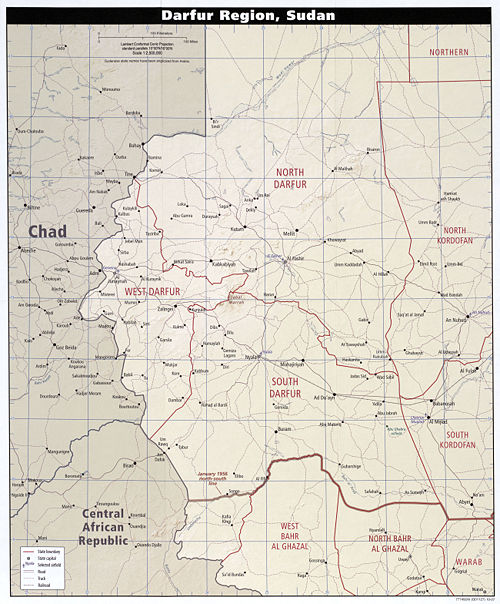 Darfur, in the west of Sudan, is a remote area, whose name means "Land of the Fur", the Fur being one of its pastoralist resident groups. It has three provinces and main towns:

Chad forms most of the western border, with a small stretch with the Central African Republic and a very small one with Libya. The Bahr Al Ghazal provinces to the south are part of semiautonomous South Sudan, while the north and east borders are with the Khartoum government.

Darfur is considered part of the North Sudan (i.e., Khartoum) government; there are some separatist movements but they do not dominate the resistance to the raiding Janjaweed Baggara, who have been government-backed.

Darfur is populated by several groups, led by the Fur people (Darfur means "land of the Fur"), who are Muslim of subsaharan ancestry, tracing their ancestry to a people in the current area of Nigeria.[1] Before the struggle fragmented into several groups, the conflict was between Baggara Arabs,[2] who are a nomadic people, and farming groups such as the Fur[1], Zaghawa, Daju,[3] and Masalit[4]

The Baggara, predominantly Arab although having some Fur intermarriage, are nomadic.[5]

Historically, the economy has been agricultural, at a subsistence level.

Oil concessions have been defined in the Kordofan provinces, and it is likely that oil exists somewhere in Darfur. There are working oilfields in south Chad.

There is virtually no transportation infrastructure. One of the problems of flying in humanitarian supplies is that while the El Fasher airport does have reasonable navigational aids, aviation fuel either has to be flown in, or brought over extremely insecure roads. The Nyala-El Fasher road is gravel, which can be described only as an improvement over dirt.

For the first time since 1991, trains ran again on the railroad from Babanusa in central Sudan, to Awei in South Sudan. While the main branch into Darfur is not operational, this puts a substantial cargo capacity on the eastern edge of Darfur. Within north Sudan, railroads are efficient, and this route connects with lines going to Khartoum and to Port Sudan on the Red Sea. [6]