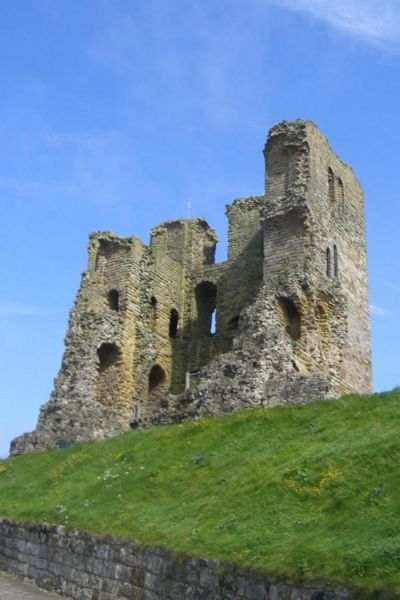 The Great Siege[1] of Scarborough Castle was a major conflict for control of one of England's most important stone fortresses during the English Civil War (1642-1651), fought between Oliver Cromwell's parliamentary Roundheads and the Royalists loyal to King Charles I (reigned 1625-1649). In February 1645, Parliamentary forces laid siege to the castle for five months of bombardment and bloody fighting, destroying most of the keep, before the defenders finally surrendered. This was a significant though short-lived victory in Oliver Cromwell's bid to replace the monarchy with his own republican regime, one which led to a second, far less bloody and destructive siege later in the year when the new garrison switched sides. The castle finally came under Parliamentary control in December 1645, and remained so until the restoration of the monarchy.

The English Civil War saw Scarborough, its castle and strategic supply port on the side of Charles I, with 700 Royalist soldiers led by Sir Hugh Cholmley - who originally occupied the castle as a Parliamentarian loyal to Cromwell in September 1642, but swapped sides in March 1643.[2] Cholmley actually lost the castle in a bloodless takeover by his own cousin, Captain Browne Bushell, in March 1643 while away at York, but persuaded him to give it back.[3] The castle changed hands seven times between 1642 and 1648,[4] and was refortified on Cholmley's orders, including establishment of the South Steel Battery for artillery.[5]

After March 1643, although Cholmley was the only Royalist commander at work in east and north Yorkshire, his forces felt so secure at Scarborough that they could move almost freely throughout the region, targeting Parliamentary positions. In May, Cholmley's cavalry moved north of Whitby, 20 miles away, and pillaged the estate of the Earl of Mulgrave, a loyal Parliamentarian. June saw Cholmley capture the marketplace at Beverley, some 30 miles from the castle, and from September to October 1643 he was present at the unsuccessful second Royalist siege of Hull.[6]

Though Royalist siege and kidnap was a nuisance to the Parliamentarians, these victories were never decisive, and Parliament considered the King's south-western strongholds far more important targets.[7] However, piracy would ensure that Scarborough became a priority. As a Royalist port, it was a safe haven for its captains to plunder coal ships, and it was also a place where arms were brought ashore: the supply of coal to London was being seriously impeded by the forces based at Scarborough Castle, a fact that would become more pressing as winter approached.[8]

The Royalist failures at Hull signalled the onset of a Parliamentary victory across Yorkshire, with the exception of Cholmley's garrison at Scarborough Castle. After the entry of Scotland into the war on Parliament's side in early 1644, the Royalist defeat at the Battle of Marston Moor and York's surrender to the Roundheads in July 1644, many of Cholmley's garrison deserted and the castle fell into disrepair. When Lord Fairfax's Parliamentary forces reached the edge of the town that August, Cholmley bought time to upgrade the castle defences by opening surrender negotiations, an act that would allow him to hold out for a year.[9]

On 18th February 1645, Sir John Meldrum took the town with 1700 men and almost no casualties,[10] cutting off any escape routes by land or sea, taking the South Steel Battery[11] and delivering the last Royalist port for Parliament.[12] The same day, Cholmley retreated into the castle and refused to give in, so the Parliamentarians prepared for what would be a five-month siege - one of the most bloody of the Civil War, with almost continuous fighting.

Meldrum had taken the town and secured the port, but that was as far as his luck held. Parliament was less interested in the castle now that the port was theirs, and he was now forced to appeal for extra funds from other ports by raising the spectre of Royalist pirates such as Browne Bushell making devastating raids on Parliamentary supply lines. Over several weeks, as the funds began to trickle through to Scarborough, allowing Meldrum the forces he needed to attempt an all-out siege, Parliament came around to the idea that besieging the castle should be prioritised.[13] The siege was delayed for six weeks, however, while Meldrum recovered from an astonishing fall over the cliff edge on 24th March. According to Cholmley, he had been trying to retrieve his hat from the wind, though the more likely explanation is that a sudden gust blew him off the cliff. Meanwhile, the garrison initially had access to drinking water from local springs and the 'Well of Our Lady' near the cliff edge (the other well being dry), along with stockpiled food, which allowed them to effectively defend the castle for months.[14] 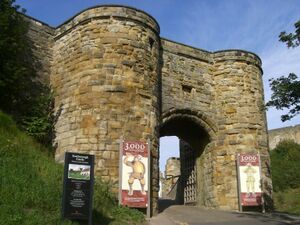 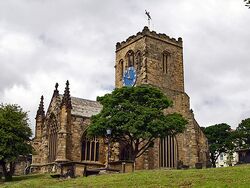 (CC) Image: David Ingham
St. Mary's Church near the castle was on the front line of the Civil War siege, sustaining extensive damage from both sides' fire. One side of the church remains a ruin.

Once Meldrum resumed command in May, the Parliamentary forces set up what was then the largest cannon in the country, the Cannon Royal, in the twelfth-century St. Mary's Church below the castle, and proceeded to fire 56-65lb (27kg) cannonballs that pounded the castle's defences;[15] the Royalists replied with their own forward battery under Browne Bushell. The church was extensively damaged over the three days of fighting, and is partly ruined to this day; records report that Cholmley "did great mischief to St. Mary's", though it is more likely that the Parliamentary gun blasts did more damage[16] to a building that was already decaying.[17] The bombardment partially destroyed the castle keep by collapsing the west wall, its roof, the floors and its interior staircase.[18] Without the outer walls breached, however, the Parliamentary forces were unable to take the castle immediately afterwards, and indeed had inadvertently supplied the defenders with a large pile of rubble that could be used for cover and ammunition. Meldrum failed to realise until it was too late that the Royalists were cut off from the barbican by the sheer amount of rubble blocking the way, and therefore did not attempt to take the castle entranceway until the Royalists had already broken through and retaken control. Meldrum was only able to take Bushell's battery, where he set up 34-pound cannons to target the castle yard. On the night of 10th May, the Royalists moved against the artillery battery, destroying it, and the Parliamentary forces retreated in some disarray, taking heavy casualties. There followed a period of particularly bloody hand-to-hand fighting around the barbican gateway the next day, where neither side took prisoners; ultimately, Sir John Meldrum was mortally wounded.[19]

By July 1645, the tide was turning in the Parliamentarians' favour: Sir Matthew Boynton had replaced Meldrum, favouring cannon fire from land and sea over infantry assault. Bombardment, scurvy, lack of water, perhaps a shortage of gunpowder and the threat of starvation meant that the castle's surrender came at noon on 25th July, with only 25 men fit to fight. Fewer than half the original 500 defenders emerged alive, receiving a less-than-warm welcome from the townsfolk, who had endured great hardship during the siege. Perhaps to bring a quick end to hostilities, Cholmley had received unprecedently good surrender terms, and left for exile in Holland.[20]

Initially repaired and rearmed for Parliament with a company of 160 to hold the castle and man the gun batteries, the castle returned to Royalist hands when the soldiers went unpaid; Matthew Boynton, its new governor and son of the elder Boynton, declared for the King on 27th July 1648.[21] This led to a second siege which brought the castle back under Parliamentary control on 19th December, with the garrison defeated as much by the oncoming winter as by the Parliamentary forces.[22] Following this, the castle was to have been demolished by an order of July 1649, to prevent it being used as a Royalist stronghold, but a local outcry saved it,[23] along with new fears that resurgent Royalist forces were plotting to retake Scarborough, and the actual appearance of Dutch vessels in the harbour.[24] Instead, it was used as a prison for those deemed enemies of the Commonwealth of England, the country's brief period of republicanism; the shell of the keep survives, minus the west wall. The castle was returned to the Crown following the restoration of the monarchy.