A hat is an article of clothing that is worn on the head, either for protection from the weather, from a physical environmental effect (such as the hard hat) or to present a formal, sporty, rustic, or adventurous appearance. Hats come in many shapes, sizes, and colors. 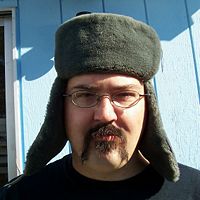 An ushanka with the ear-flaps down.
Retrieved from "https://citizendium.org/wiki/index.php?title=Hat&oldid=37275"
Categories:
Hidden category: