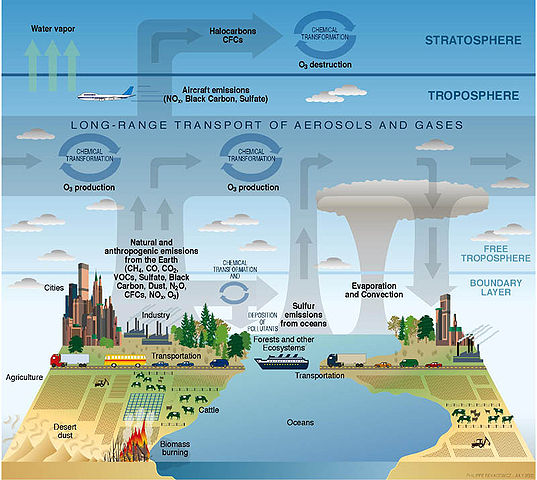 Atmospheric science is the umbrella term for the study of the atmosphere – the blanket of air covering the Earth.

It is a relatively new discipline that is concerned with the composition, structure and evolution of the atmosphere as well as its processes and how those processes interrelate with other systems.[2][3][4]

The adjacent image depicts the various processes occurring in the atmosphere and how they relate to other Earth systems such as agriculture, land, sea and air transportation, other ecosystems, air pollutant emissions, the water cycle (evaporation and rainfall), forests and forest fires, deserts and desert dust, industry, etc.

To the extent that atmospheric science focuses primarily on the Earth's atmosphere, it can be regarded as a subfield of the Earth sciences, each of which is a particular synthesis of the fundamentals of physics, chemistry, fluid dynamics and thermodynamics.

Atmospheric science includes a number of primary subdisciplines as briefly discussed further in this section.[5]

Atmospheric chemistry is the study of the chemistry of Earth's atmosphere. It is a multidisciplinary field that draws on physics, meteorology, environmental chemistry, oceanography and volcanology. The composition and chemistry of the atmosphere is important because of the interactions between the atmosphere and living organisms.

The composition of the atmosphere has been changed by human activity and some of those changes have created problems for human health, agricultural crops and ecosystems. Some examples of such problems are acid rain, smog, the greenhouse effect and ozone depletion (often referred to as the ozone hole). Atmospheric chemistry seeks to understand such problems and perhaps find possible solutions for them.

Atmospheric dynamics is the study of all motion systems of meteorological importance. It includes such diverse phenomena as thunderstorms, tornadoes, hurricanes, tropical cyclones, jet streams and global-scale circulations.[6]

The goal of studying atmospheric dynamics is to explain the observed motion systems on the basis of fundamental principals of physics. The benefits that would accrue would include improving weather forecasting and better predictions of the occurrences of devastating tornadoes, hurricanes, and cyclones.

Meteorology is the interdisciplinary scientific study of the processes and phenomena of the atmosphere and it involves atmospheric chemistry, atmospheric physics and weather forecasting.[7][8] The primary subfields of meteorology include: 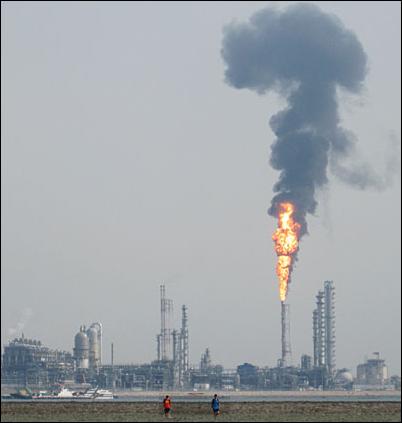 Air pollution includes chemicals and particulate matter introduced into the atmosphere that cause harm or discomfort to humans or other living organisms, or damage the environment. Air pollution is the major cause of acid rain and smog.

Many of the modern, advanced dispersion modeling programs include a pre-processor module for the input of meteorological and other data, and many also include a post-processor module for graphing the output data and/or plotting the area impacted by the air pollutants on maps. It should be noted that air pollution dispersion modeling also falls within the scope of the meteorology subdiscipline of atmospheric science.

Climatology is the study of long- and short-term climate trends (or changes) due to natural and anthropogenic causes. It is a combination of hydrology, geology, meteorology and other fields.[11]

Paleoclimatology, a subfield of climatology, seeks to reconstruct past climates by examining records such as ice cores and tree rings. Contemporary (short-term) weather forecasting uses meteorological data accumulated over many years (e.g., records of rainfall, temperature and atmospheric composition) and models that incorporate those data.

Global warming is a major focus of climatology and is studied to determine its causes and potential effects.

Hydrology is the study of the movement, characteristics and distribution of seawater, surface-water and groundwater.

The primary subfields of hydrology include:

Oceanography is the study of the Earth's oceans. It is a sub-discipline of Earth science. Seventy percent of the earth's surface is covered by oceans and they encompass many diverse environments. Research is performed on scales ranging from small water drops to entire ocean basins.

The primary subfields of oceanography include:

There is also the field of ocean engineering which involves the design, construction, and installation of various instruments and vehicles to be used in oceanographic studies.

Aeronomy is the study of the upper layers of Earth's atmosphere where dissociation and ionization are important.[12] During these processes, solar radiation separates neutral atoms, molecules, and chemical compounds into positive and negative particles. This occurs in atmospheres around the Earth, other planets, comets, and satellites.

In general, aeronomy is the science that studies all planetary atmospheres in which physical and chemical processes, resulting from the dissociation and ionization processes under the influence of solar radiation, are important.

Planetary science is the study of planets, moons, and planetary systems, in particular those of the Solar System and how they were created. It studies objects ranging in size from very small meteoroids to gas giants, seeking to determine their composition, dynamics, formation, interrelations and history. It is an intensely interdisciplinary field, originally drawing from astronomy and Earth science.