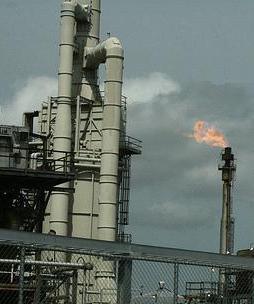 However, a great deal of flaring has nothing to do with protection against the dangers of over-pressuring industrial plant equipment. When crude oil is extracted and produced from oil wells, raw natural gas associated with the oil is produced to the surface as well. In areas of the world lacking pipelines and other gas transportation infrastructure, vast amounts of such associated gas are commonly flared as waste or unusable gas.

The flaring of associated gas may occur at the top of a vertical flare stack (as in the adjacent photograph) or it may occur in a ground-level flare in an earthen pit.

In industrial plants such as petroleum refineries, petrochemical or other chemical plants, and natural gas processing plants, the main purpose of a flare stack is that of safety by protecting pressure vessels or pipes from over-pressuring due to unplanned operational upsets.

Whenever any plant equipment items are over-pressured, pressure relief valves automatically release gas and sometimes liquids as well. The released gases and/or liquids are routed to a flare stack and burned as they exit the flare stack. 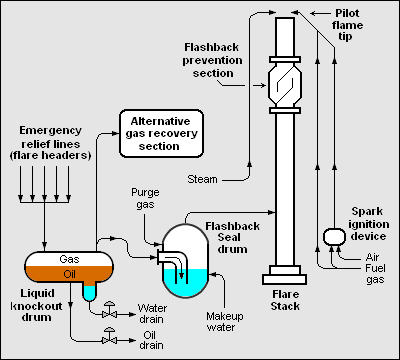 The released gases and liquids are routed through large piping systems called flare headers to a flare stack. The released gases are burned as they exit the flare stacks. The size and brightness of the resulting flame depends upon the flammable material's flow rate in terms of joules per hour (or btu per hour).[2]

Most industrial plant flares have a vapor-liquid separator (also known as a knockout drum) upstream of the flare to remove any large amounts of liquid that may accompany the relieved gases.

Steam is very often injected into the flame to reduce the formation of black smoke. In order to keep the flare system functional, a small amount of gas is continuously burned, like a pilot light, so that the system is always ready for its primary purpose as an over-pressure safety system. 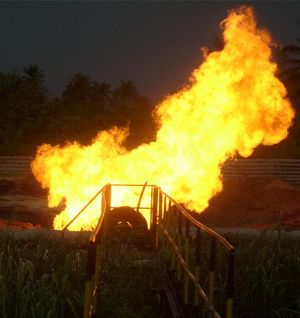 That amount of flaring and burning of associated gas from oil drilling sites is a significant source of carbon dioxide (CO2) emissions. Some 400 × 106 tons of carbon dioxide are emitted annually in this way and it amounts to about 1.2% of the worldwide emissions of carbon dioxide. That may seem to be insignificant, but in perspective it is more than half of the Certified Emissions Reductions (a type of carbon credits) that have been issued under the rules and mechanisms of the Kyoto Protocol as of June 2011.[4][5]

Satellite data on global gas flaring show that the current efforts to reduce gas flaring are paying off. From 2005 to 2010, the global estimate for gas flaring decreased by about 20%. The most significant reductions in terms of volume were made in Russia and Nigeria.[4][6]