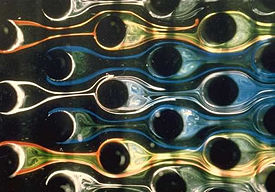 Scenarios studied in fluid dynamics can be classified according to either the speed of the fluid or the properties of the fluid material itself. The speed of the fluid -- or equivalently, of a solid object relative to the fluid -- can be subsonic, supersonic, or hypersonic, depending on whether it is less than, greater than, or considerably greater than the speed of sound in the fluid. Hypersonic speeds are generally considered to be at least 5 times the speed of sound. For subsonic speeds, flow can be further characterized by the Reynolds number for an object within the fluid. The Reynolds number is a dimensionless number, proportional to the speed and also dependent upon the size of the object and the fluid's density and viscosity.