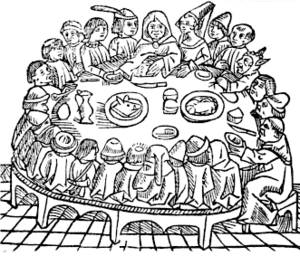 The Canterbury Tales is a collection of tales written by Geoffrey Chaucer between 1387 and 1400[1], two of them in prose, the rest in verse. The tales, some of which are originals and others not, are contained inside a frame tale and told by a group of pilgrims on their way from Southwark to Canterbury to visit the shrine of Saint Thomas Becket at Canterbury Cathedral.[2] The Canterbury Tales are remarkable for having been written in the vernacular, Middle English, rather than the language of courtiers (French) or of the church (Latin). From the earliest days of their appearance to the present moment, they have been recognized as a foundational pillar of English literature. The Oxford English Dictionary says that "in later times" the phrase "Canterbury Tale" is "often taken as" being "a long tedious story, a fable, a cock-and-bull story".[3]

Much of The Canterbury Tales is in iambic pentameters with an AABB rhyming scheme, but a few tales were written in other forms, among them the ballad stanza.

The themes of the tales vary, and include topics such as courtly love, treachery, and avarice. The genres also vary, and include romance, Breton lai, sermon, beast fable, and fabliau. The characters, introduced in the General Prologue of the book, tell tales of great cultural relevance.

Some of the tales are serious and others humorous; however, all are very precise in describing the traits and faults of human nature. Antifraternal and anti-clerical themes abound, along with instances of courtly romance, fabliaux, and the traditional ballad. The work is incomplete, at least if we take at face value the claim in the General Prologue that each character would tell four tales, two on the way to Canterbury and two on the return journey. This would have meant a possible one hundred and twenty tales which would have dwarfed the twenty-six tales actually written. The missing tales inspired many, some quite soon after Chaucer's death in 1400, to write their own additional tales, among them the spurious Plowman's Tale and the Tale of Beryn, a continuation of the narrative which includes the pilgrims' eventual arrival in Canterbury itself as well as the beginning of the return journey.

From the 14th century to the present, readers have found political overtones within the tales, particularly as Chaucer himself was a significant courtier and political figure at the time, close to the corridors of power. Chaucer's wife Philippa (de) Roet was the sister of John of Gaunt's favourite mistress (afterwards third wife), Katherine Swynford, and Chaucer had close ties with the so-called Lollard Knights. There are many hints at contemporary events, although few are proven, and the theme of marriage common in the tales is presumed to allude to several different marriages, most often those of John of Gaunt. In addition to Chaucer himself, Harry Bailly of the Tabard Inn was a real person and the Cook has been identified as quite likely to be Roger Knight de Ware, a contemporary London cook.

The work was probably begun in the 1380s with Chaucer stopping work at some point in the late 1390s prior to his death in 1400. It was not written down fully conceived: it seems to have had many revisions with the addition of new tales at various times. The plan for one hundred and twenty tales is from the general prologue. It is announced by Harry Bailly, the host, that there will be four tales each. This is not necessarily the opinion of Chaucer himself, who appears as the only character to tell more than one tale. It has been suggested that the unfinished state was deliberate on Chaucer's part.

The structure of The Canterbury Tales is a frame narrative and easy to find in other contemporary works, such as The Book of Good Love by Juan Ruiz and Boccaccio's Decameron, which may have been one of Chaucer's main sources of inspiration. Chaucer indeed adapted several of Boccaccio's stories to put in the mouths of his own pilgrims, but what sets Chaucer's work apart from his contemporaries' is his characters. Compared to Boccaccio's main characters - seven women and three men, all young, fresh and well-to-do, and given Classical names - the characters in Chaucer are of extremely varied stock, including representatives of most of the branches of the middle classes at that time. Not only are the participants very different, but they tell very different types of tales, with their personalities showing through both in their choices of tales and in the way they tell them.

The idea of a pilgrimage appears to have been mainly a useful device to get such a diverse collection of people together for literary purposes. The Monk would probably not be allowed to undertake the pilgrimage and some of the other characters would be unlikely ever to want to attend. Also all of the pilgrims ride horses, there is no suggestion of them suffering for their religion. None of the popular shrines along the way are visited and there is no suggestion that anyone attends mass, so that it seems much more like a tourist's jaunt.

Chaucer does not pay that much attention to the progress of the trip. He hints that the tales take several days but he does not detail any overnight stays. Although the journey could be done in one day this speed would make telling tales difficult and three to four days was the usual duration for such pilgrimages. The 18th of April is mentioned in the tales and Walter William Skeat, a 19th-century editor, determined 17 April 1387 as the probable first day of the tales.

Scholars divide the tales into ten fragments. The tales that make up a fragment are directly connected, usually with one character speaking to and handing over to another character, but there is no connection between most of the other fragments. This means that there are several possible permutations for the order of the fragments and consequently the tales themselves. The above listing is perhaps the most common in modern times, with the fragments numbered I-X, but an alternative order lists them A-G, with the tales from the Physician's until the Nun's Priest's placed before the Wife of Bath's. The exception to the independence between fragments are the last two. The Manciple's tale is the last tale in IX but fragment X starts with the Parson's prologue by saying that the Manciple had finished his tale. The reason that they are kept as two different fragments is that the Manciple starts his short tale in the morning but the Parson's tale is told at four in the afternoon. It is assumed that Chaucer would have amended his manuscript or inserted more tales to fill the time.

Two early manuscripts of the tale are the Hengwrt Chaucer manuscript and the Ellesmere manuscript. Altogether, the Tales survives in eighty-four manuscripts and four printed editions dating from before 1500. The Canterbury Tales Project is transcribing the whole text of all these versions, comparing them to attempt to uncover how they are related, and publishing transcripts, images and analyses of all this: see further the links in References, below.

Like Dante, Chaucer's greatest contribution that this work made to English literature was in popularising the literary use of the vernacular language, English (rather than French or Latin). Some of Chaucer's contemporaries, such as John Gower, also wrote some of their literary output in English, and yet only Chaucer staked his all on English, while at the same time taking inspiration from continental writers in the vernacular, such as Dante and Boccaccio. Within the tradition of English verse, Chaucer's output helped to assure the predominance of continental verse forms, in particular rhymed verse, over the traditional alliterative form.

The pilgrims' route and real locations

The pilgrims would probably have travelled along Watling Street, a route ancient even in Chaucer's time. Used by the Celts, paved by the Romans and named by the Anglo-Saxons, the stretch from London to Canterbury and then Dover is now the A2 road.

The City of Canterbury has a museum dedicated to The Canterbury Tales".[4]

The postulated return journey has intrigued many and continuations have been written as well as tales written for the characters who are mentioned but not given a chance to speak. The Tale of Beryn is a story by an anonymous author within a 15th-century manuscript of the work. The tales are rearranged and there are some interludes in Canterbury, which they had finally reached, and Beryn is the first tale on the return journey, told by the Merchant. John Lydgate's Siege of Thebes is also a depiction of the return journey but the tales themselves are actually prequels to the tale of classical origin told by the Knight in Chaucer's work.

The title of the work has become an everyday phrase in the language and has been variously adapted and adopted. Recently an animated version of some of the tales has been produced for British television. As well as a version with Modern English dialogue, there were versions in the original Middle English and Welsh.

Evolutionist Richard Dawkins used The Canterbury Tales as a structure for his 2004 book about evolution - The Ancestor's Tale: A Pilgrimage to the Dawn of Evolution. His animal pilgrims are on their way to find the common ancestor, each telling a tale about evolution.

In the United States, The Canterbury Tales has been expurgated since its first appearance; it was subjected to revisions as late as 1928. In 1995, the book was challenged at Eureka Illinois High School for its lewd content and banned.

Idries Shah in The Sufis wrote of evidence that the work was based on Fariduddin Attar's 12th-century work The Parliament Of The Birds citing various similarities between the two works[5]. Like Attar, Chaucer had thirty participants in his pilgrimage and both works are an allegory of inner development. "The Pardoner's Tale" occurs in Attar's work, whilst the pear-tree story is found in Book IV of the Mathnawi by the 13th century author Rumi[5].

Stage and film adaptations and allusions