The Wife of Bath's Prologue and Tale 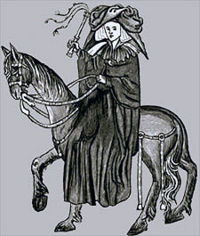 The Wife of Bath, from a nineteenth-century engraving based on MS Cambridge GG.4.27

The Wife of Bath's Prologue and Tale is one of the Canterbury Tales of Geoffrey Chaucer, and has consistently been among the best-known and most popular of all the Tales. As Chaucer's most fully-realized character, her autobiographical Prologue is several times longer than any of the others, provoking the Friar to remark, in both jest and admiration, "This is a long preable of a tale!" Her prologue, in which she criticizes male texts and readers who "glosen up and down" to make texts mean what they want, has led many to regard the Wife of Bath as an early feminist, athough substantial portions of her prologue are drawn from the so-called "antifeminist" tradition. In addition to her appearance in Chaucer's work, the Wife of Bath has enjoyed a substantial literary afterlife, being re-invoked as a character by Chaucer's followers such as Thomas Hoccleve, and spoken of admiringly by writers from John Dryden to Susan Swan.

"Experience, thogh noon auctoritee," the Wife commences in the first person, "ys in this world is ryght enogh for me" (Experience, though not authoritative in this world, is good enough for me"). Indeed, while this is the most common version of her first line, in several early manuscripts, the first word is not "Experience" but rather "Experiment," emphasizing the role of the Wife as a person who, by trial and sometimes error, produces a distinctive kind of science or knowledge in her own right.[1]

True to her word, she begins with her own experiences, detailing her life with her five husbands, who progressed from the old and rich to the young and handsome, interweaving her account with her own decidedly different glosses on the Biblical injunctions concerning marriage. Having been tutored by this experience ("Of five housbondes scoleying am I"), the Wife of Bath considers herself an expert on the relations between men and women.

The Wife of Bath's Tale is a variant of the "Loathly Lady" folk tradition, one which quite often, as in her tale, is grafted into the larger Arthurian cycle of courtly romance.