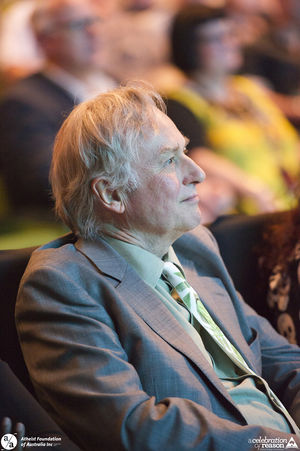 Richard Dawkins[1] (born 26th March 1941) is a British ethologist[2] and evolutionary biologist who has written widely on science and religion. He is a prominent atheist well-known for repeatedly challenging in print, film and television the religiously-minded over their beliefs, especially creationists. He is a trustee of the Richard Dawkins Foundation for Reason and Science (RDF), and was Charles Simonyi Professor of the Public Understanding of Science at the University of Oxford from 1995 to 2008.

Dawkins's best-known work on evolution is The Selfish Gene (1976), which set out the case for evolution as primarily a matter of genes being the main unit of natural selection, rather than individuals, groups or species. Dawkins, following the work of others such as W.D. Hamilton, argued that traits emerge where these benefit the survival of genes, whoever passes them on - so, for example, co-operative behaviour might lead to an individual never producing offspring, but their genes will still spread because their relatives, who share copies of the same genes, are beneficiaries. The Selfish Gene also introduced the concept of the 'meme', an abstract unit of culture such as an idea, belief or even a mispronunciation, that spreads through a society in ways analogous to those of genes in nature. The book's title has often been misinterpreted as support for biological determinism - a theory backed by no reputable scientist - or a morally 'selfish' lifestyle.[3] Dawkins extended his theories with his 1982 work The Extended Phenotype, which discusses how the physical effects of genes extend into the environment and even other bodies.

Dawkins has also written extensively on the role of religion in society, and has argued at length, particularly in 2006's The God Delusion, that there is almost certainly no god or supernatural realm, that people should not live their lives according to superstition, and that religion can be a dangerous influence. Dawkins supports the RDF's work in calling for more atheists to make themselves public (the 'OUT Campaign'), and the Foundation supports research aimed at understanding unreason.[4]

Dawkins's position as a prominent atheist and 'skeptic'[5] has led to a large amount of published and broadcast criticism, including instances where trickery has been used to misrepresent his views. The latest is his appearance in the creationist-backed pro-intelligent design film Expelled (2008), which Dawkins and others participated in under another title without being made aware of the film-makers' intentions.[6]

Dawkins has appeared in discussions alongside other well-known atheists and skeptics from a variety of backgrounds, including Daniel Dennett, Sam Harris, A. C. Grayling, Lawrence M. Krauss and Christopher Hitchens. He was a good friend of the late science fiction writer and atheist Douglas Adams, who introduced Dawkins to his future wife, the actress and artist Lalla Ward.[7] Ward knew Adams through their work on the British sci-fi television series Doctor Who, a programme that Dawkins appears in during the 2008 series, for a cameo playing himself.[8] He also appeared in the South Park episodes 'Go God Go' and 'Go God Go Part XII' in season ten.