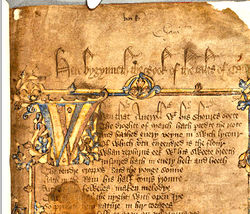 The Hengwrt Chaucer manuscript, also Hengwrt Chaucer, is an early 15th century illuminated manuscript. It is believed to be the earliest extant copy of Geoffrey Chaucer's The Canterbury Tales. It is held in the National Library of Wales, Aberystwyth, referred to as MS. Perniarth 392 D and usually abbreviated as Hg. Together with the Ellesmere Chaucer manuscript it is considered to be the closest to the original text of The Canterbury Tales. The manuscript is named after the residence of Colonel Robert Baughan, one of its owners, who lived at Hengwrt in Wales. [1]

Significance of the Hengwrt Chaucer

Although the Hengwrt Chaucer is less attractive than the Ellesmere Chaucer, it has emerged as a superior manuscript of The Canterbury Tales. [2] The Hengwrt Chaucer was first published in Furnivall’s parallel text in 1868, [3] but it only drew increasing attention since John M. Manly and Edith Rickert's collection and study of all the Canterbury Tale manuscripts, published in 1940.

The Manly and Rickert's project

In 1924 Manly and Rickert, colleagues at the University of Chicago, started a project for a new edition of The Canterbury Tales. Their goal was to produce a text, which would come close to what Chaucer's holograph might have looked like. To achieve that they wanted to track down as many manuscripts as possible, and make copies of them with the then available technology of the photostat, in order to compare them all. Procuring the manuscripts was not an easy task. Many of them were still in private collections and their owners had to be approached to allow Manly and Rickert access to their libraries. Both American scholars were granted access to the British Museum and many owners send their manuscripts there for examination and photostatting. Manly and Rickert also searched for copies of The Canterbury Tales mentioned in wills, library book lists and sale catalogues. They uncovered a number of manuscripts and pages, including the Merthyr fragment, related to the Hengwrt. In analysing all the information available they sought to determine what Chaucer actually wrote.
While Manly and Rickert's efforts have revealed much information about the nature of the production of the extant manuscripts, they did not reach their initial goal. The final result of the collation of all known manuscripts was that they descended from no common ancestor. Yet the research of Manly and Rickert revealed the superiority of the Hengwrt Chaucer manuscript as a witness. [4]

The Hengwrt manuscript was copied in a standardised variety of London English, which was common at the end of the 14th and the early 15th century, although it does not show the same degree of uniformity as does present-day standard written English. That period was characterised by a huge degree of dialectal variation in the written record. According to Chaucer himself:

Research has led academics to conclude that the Hengwrt and the Ellesmere Chaucer manuscripts, amongst others, were copied by the same scribe. This scribe, at first known as Scribe B, was tentatively identified in 2004 by professor Linne Mooney as Adam Pinkhurst. The Hengwrt Chaucer however shows a greater degree of spelling variation than the Ellesmere Chaucer, a variation that appears to derive from the copytext and possibly from Chaucer's holograph. As such the Hengwrt manuscript best preserves elements of Chaucer's own spelling practices. After a more careful inventory and editorial preparation of the contents of Chaucer's poem, the scribe then copied the Ellesmere manuscript, which shows evidence of careful linguistic editing and regularisation. Even the order of the tales was changed. [5]

It is generally assumed that the Hengwrt Chaucer manuscript was copied around 1400, Chaucer’s probable year of death. Professor Michael Louis Samuels, an authority on Middle English, ventures the date circa 1402-1403. [6] Professor Ralph Hannah of Keble College, Oxford however, suggests that the manuscript was copied during Chaucer's lifetime, and that it can possibly be dated before 1400. [7] Since the digitisation of the Hengwrt Chaucer, new research is emerging, particularly about erasures in the margins of the manuscript. This may prove that it dates indeed from Chaucer’s own lifetime. [8]

History of the manuscript

Neither the sponsor of the manuscript, nor the earliest owners are known. Academics attempted to retrace its ownership on the basis of glosses (names and notes) that were recorded in it over a large period of time.

The earliest trace of ownership is the signature "ffouke Dutton Huius ly(bri) est possesoer". The name is erased but still visible under UV light. There was a Fouke Dutton, a rich draper of Chester, and a great purchaser of monastic property. He was mayor of Chester in 1537, 1548, and 1554. He died in 1558. [9]
The next significant gloss is “R Wryne” with a notary’s knot. This inscription can be attributed to Ralph Wrine, recorder of Chester during the reign of Henry VIII, namely in 1535, 1536, and 1540. [10] After that there are a number of additions, including "Gilbart Nelsoun", "Johannes Barcomsted", "William Dymmocke", but none of these names could firmly be identified.
A more important gloss shows the date of birth of five children in a family named Banestar or Bannester. They cover a period from 1571 until 1578. Some details such as "having one tothe at his byrth" were added in a painstaking italic hand. The next gloss, "per Ellenour Banester the graundmother of this under-named", followed by five births from 1605 until 1612 leads us to the Brereton family. The first birth was at Newington, the second at Chester, and three at Llanvair, Caernarvon.
Manly and Rickert traced the alliances by which the Hengwrt Chaucer manuscript may have passed from Fouke Dutton to Eleanor Starkey, who married John Banester of Chester. John died in 1581. Their daughter Martha married Andrew Brereton. About Andrew Brereton's death in 1649 the manuscript was included in the collection of Robert Vaughan of Hengwrt, Meirionnydd, an antiquary and collector of manuscripts and books. [11]

From then on, the manuscript was part of the Hengwrt Library, which remained at Hengwrt until 1859. Then it passed by the will of Sir Robert Williames Vaughan to W. W. E. Wynne of Peniarth, who sold the manuscripts to Sir John Williams in 1904. He in turn presented the Peniarth manuscripts, including the Hengwrt group, to the newly-founded National Library of Wales in 1909. The 'Hengwrt Chaucer' has remained in the Library's care ever since. [11]

Description of the manuscript

The Hengwrt Chaucer is carefully produced, but in size, layout and decoration more modest than the Ellesmere Chaucer. The manuscript contains two hundred and fifty parchment leaves of medium thickness and quality, with a velvety finish. The pages are approximately twenty-nine by twenty and a half centimetres in size, irregularly trimmed and very stained. Some portions are eroded, maybe gnawed by rats. In 1956 they have been replaced with blank parchment. The text of The Canterbury Tales is written in an anglicana formata [12] script, which is representative for the latter half of the fourteenth century. The text headings are written in either a larger anglicana script, or in an hybrid anglicana. The scribe, who also copied the Ellesmere Chaucer, and worked on several other manuscripts, has been identified in 2004 as Adam Pinkhurst. The Canon's Yeoman's Prologue, The Canon's Yeoman's Tale and the end of The Parson's Tale are lacking.

In 1930 the bindings, dark tanned leather on possibly medieval, oak boards, were removed and stored. [13] In 1956 the manuscript was rebound at the National Library of Wales in red morocco with diamond and rectangular geometrical patterns. It was sewn on five double bands. [14]

The opening page begins with a large initial W in blue, gold and an orange red. The text is surrounded by border-bars of the same colours, decorated with knots and trefoils. The heading Here bygynnyth the Book of the tales of Caunterbury is written in a goldish-brown ink. It is above the top bar and in some places overlapped by it. Blue initials with red penwork mark the opening of the tales, prologues and links. Blue paraphs mark lesser textual divisions and glosses. The Hengwrt Chaucer manuscript contains no illustrations of the pilgrims.

The order of the tales

Academics divide the tales into ten fragments. The tales contained in a fragment are connected, and give a clear indication of their order, usually with one character that passes the floor to another. Between the fragments themselves there are no explicit connections, save for IX-X and, in the Ellesmere manuscript, IV-V. This means that there is no explicit indication of the order in which Chaucer intended the fragments to be read. The order of the tales in the Hengwrt manuscript differs from that of the Ellesmere Chaucer, and is as follows: