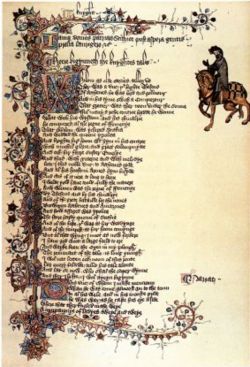 Page of The Canterbury Tales from the Ellesmere Chaucer manuscript.

Significance of the Ellesmere Chaucer

The Ellesmere Chaucer is one of the oldest surviving manuscripts of The Canterbury Tales. It was copied in the years following Chaucer's death in 1400, according to some in 1401, [1] to others around 1410.[2] Since no holograph of Chaucer has ever been found, it offers the best evidence of what he wrote.
Still it was only with the publication of Walter W. Skeat's edition of the Works of Geoffrey Chaucer in 1894, that the Ellesmere Chaucer gained its eminent textual status. After Skeat many editions were based on the Ellesmere Chaucer, including the Riverside Chaucer in 1987. Other editions were based on the Hengwrt Chaucer manuscript. In fact, no matter which of these is chosen, the other one is heavily consulted. [3]

History of the manuscript

The early history of the Ellesmere Chaucer manuscript is uncertain, but it is possible that soon after Chaucer's death in 1400, his son Thomas commissioned a deluxe manuscript of The Canterbury Tales, and provided the materials to produce it. [4] Over a large period of time names were recorded in the manuscript, which implies that it must have had several owners. The following is a reconstruction of that ownership with the use of the most important of those glosses.

Since a ballad on the House of Vere is included at the beginning of the manuscript, an early association with John de Vere (1408-1462), 12th Earl of Oxford is probable. After the death of his father in 1417, he became ward of the Duke of Exeter, and in 1426 of the Duke of Bedford, both kinsmen of Thomas Chaucer.
At the time of death of John de Vere (1442-1513), 13th Earl of Oxford, Sir Robert Drury was one of the executors of the will and among the legatees were Sir Drury's sons-in-law, George Waldegrave and Sir Giles Alington. [2]

From 1513 on the manuscript seems to have been in the possession of the Drury family.

"... per me henricum Payne" "And also my Chaucer written in vellum and illumyned with golde."

This could be Henry Payne of Nowton, near Hawstead, a member of 'The Honourable Society of Lincoln's Inn', who died in 1568. He had witnessed Sir William Drury's will in 1557 and had gotten a legacy from him. In his own will, he bequeathed the manuscript to Sir Giles Alington, the grandson of Ursula Drury and her husband Giles Alington.

In 1917, Henry Edwards Huntington, railroad magnate and collector of art and rare books, purchased the Bridgewater library privately from Sotheby's. That makes him the last private owner of the manuscript that is now known as the Ellesmere Chaucer. After Huntington's death in 1927, his priceless library of rare books and art was opened to the public.

Description of the manuscript

The beautiful, large manuscript, probably made and bound in London, is approximately four hundred by two hundred eighty-four millimetres in size. It contains two hundred and forty fine vellum leaves, two hundred thirty-two of which contain the text of The Canterbury Tales. It is written in an anglicana formata script [5] by the scribe who also copied the Hengwrt Chaucer manuscript. In 2004 this scribe has been tentatively identified as Adam Pinkhurst. The remaining leaves contain verses, notes and scribbles by various persons. It is luxuriously illuminated and by far the most famous survivor of the rare illustrated versions of Chaucer's major works. In circa 1911 it was bound in dark green morocco, with the Egerton arms stamped in gold on the front cover. [6] In 1994 the previous modern green goatskin binding of the manuscript was removed and in 1995 the manuscript was re-bound, using original 15th-century techniques. [2]

After the text was copied [7] it was surrounded by decorated borders of floral patterns in a conservative style. [6]


The white-highlighted initials on a gold ground in blue, pink, dull red, and with little or no green, are six to four lines high. They are filled with leaf designs, with bars and foliage borders in the same colours, including daisy buds, interlaced and with an occasional grotesque.

Smaller gold initials are two to four lines high and have white patterns on particoloured blue and pink grounds.
Paragraph marks are alternating in blue with red or in gold with grey-blue flourishing and further in the text in gold with purple. Running headlines and marginal notes are set off by these paragraph marks. [2]
Verse paragraph breaks are identified by the term 'pausacio'. [8]

The portraits of the pilgrims

A unique feature of the Ellesmere Chaucer is the set of twenty-three equestrian portraits of the pilgrims. Along with some symbolism - the Clerk with books, the Physician with a urine bottle - some replicate many of the details of the descriptions given in the General Prologue and the links between the tales. [9] Even the horses suit their riders, at least to some extent.
Each portrait is positioned at the start of his or her tale and placed outside of the written space. On the recto the illuminations are on the right of the text in the gloss space or in the ruled texts space. On the verso they are usually to the left of the text in a niche in the decoration, except for the portrait of the Miller, which is also pictured on the right of the text.
The portraits vary in size, the largest being circa hundred by eighty millimetres, the smallest circa forty-five by forty-five millimetres according to the artist.
There were three different artists at work. One painted the first sixteen pilgrims and the last one as small figures. A second one painted only Chaucer's portrait. A third one was responsible for the illustrations of the Monk, the Nun's Priest, the Second Nun, the Canon's Yeoman and the Manciple. He painted his figures on a larger scale en made them standing on a patch of green grass.
Some miniatures seem to be done before the border decoration was painted, and forced the bar border and initial to the right of their normal position. Others were painted after the border. Then erasure of parts of the border was needed. [2]

The portrait of pilgrim Chaucer, [10] the pilgrim that records all the tales, is painted by the most competent of the three artists that worked on the Ellesmere Chaucer. There is some discrepancy in proportion between the large bust of pilgrim Chaucer and the smaller size of his legs and his horse, standing on a grassy plot. It marks the opening of his The Tale of Melibee. This bearded portrait of Geoffrey bears a marked resemblance to the image appearing in a British Library manuscript of Thomas Hoccleve's poem The Regiments of Princes. (MS Harley 4866). [11] That picture [12] accompanies a eulogy of Chaucer and is descibed by Hoccleve as a lyknesse that will serve to remind readers of what Chaucer looked like. [13]

The order of the tales

The Ellesmere and Hengwrt Chaucer manuscripts share the same scribe. Pinkhurst appears to have copied the Hengwrt Chaucer first, maybe from Chaucer's originals and possibly during his lifetime. He then copied the Ellesmere manuscript after a more careful inventory and editorial preparation.
Academics divide the tales into ten fragments. The tales in a fragment are connected, and give a clear indication of their order, usually with one character that passes the floor to another. Between the fragments themselves there are no explicit connections, save for IX-X and, in the Ellesmere manuscript, IV-V. This means that there is no explicit indication of the order in which Chaucer intended the fragments to be read. The order of the tales in the Hengwrt and the Ellesmere manuscripts differs. The order of the Ellesmere Chaucer, also the most popular one and used in The Riverside Chaucer, is as follows:

In commemoration of its 75th anniversary, the Huntington Library authorized Yushodo Co. in Tokyo to publish a facsimile of the Ellesmere Chaucer. This facsimile was printed in a full-color, high-definition process with gold inlay, on high quality, long-life paper imported from England. The original camera work was done at the Huntington Library by the Huntington's principle photographer, Robert Schlosser. The manuscript was conserved and rebound by Anthony G. Cains of the Trinity College, Dublin, with the assistance of Maria Fredericks, at the time Rare Book Conservator of the Huntington Library. This is truly an international work, bringing together the expertise of all participants to produce one magnificent facsimile. [4]

This fascimile was produced in a limited edition of 250 copies:

The Ellesmere Chaucer Monochromatic Facsimile
The transparencies that were the basis of the color facsimile were used to make a full-sized, monochromatic facsimile, printed by the Stinehour Press of Lunenberg, Vermont. The facsimile exibits the texture and decoration of the original manuscript pages. It features a color frontispiece, the page that begins the Knight's Tale. The New Ellemere Chaucer Facimile was released in 1996.