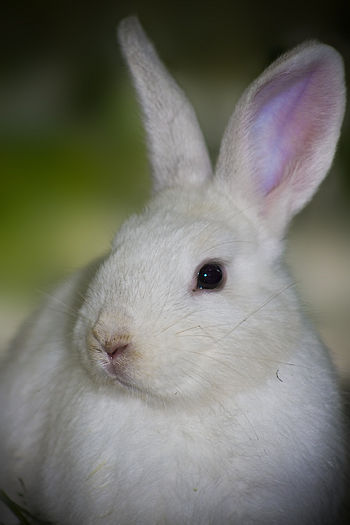 A rabbit is a small herbivorous mammal known for its long ears and quick bursts of speed. The word "rabbit" is sometimes used to refer to the related hare, although properly they are distinguished in that rabbits are altricial, having young that are born blind and hairless; many also live underground in burrows or warrens. Rabbits and hares have four upper incisor teeth placing them in the order lagomorpha rather than the popular misconception that they are rodents, which have only two.

Rabbits in the wild

Rabbits inhabit Europe, Africa and Asia. The rabbit Oryctolagus cuniculus is native to central and southern Europe and north Africa. The red rabbit, (Pronolagus) is found in South Africa. Other species of rabbit include the grass rabbit (Poelagus) of Sudan, the bristly rabbit (Caprolagus) of the Himalayas, the Liukiu Island rabbit (Pentalagus), and the Sumatra rabbit (Nesolagus). A striped species of rabbit has been found in Asia. [1]

Rabbits were introduced to Australia in 1859 and spread there so prolifically that they became a nuisance to agriculture. The virus Myxomytosis was released and succeeded in the purpose of reducing the rabbit population at least temporarily.

The domestic life of rabbits

Humans' relationship with the European or ‘true’ rabbit was first recorded by the Phoenicians before 1,000 BC, when they termed the Iberian Peninsula i-shfaním (literally, "the land of the hyraxes"). This phrase is pronounced absolutely identically in Hebrew language, i (אי) meaning "island" and shafan (שפן) meaning "hyrax", shfaním (שפנים) being the plural form. Phoenicians called the local rabbits "hyraxes" because hyraxes resemble rabbits in some way, and probably were more common than rabbits at that time in their native Levant. Hyraxes, like rabbits, are not rodents. The Romans converted the phrase i-shfaním to its Latin form, Hispania, and hence the modern word "Spain".

The European Rabbit (Oryctolagus cuniculus) is the only species of rabbit to be domesticated. All pet breeds of rabbits - such as dwarf lops, angoras, etc. - are of this species. However, rabbits and people interact in many different ways beyond domestication. Rabbits are an example of an animal which is treated as food, pet and pest by the same culture.

When used for food, rabbits are both hunted and raised for meat. Snares or guns along with dogs are usually employed when catching wild rabbits for food. In many areas rabbits are also raised for meat, a practice called cuniculture. Rabbit pelts are sometimes used as part of accessories, such as scarves or hats. Rabbits are also very good producers of manure; their urine, being high in nitrogen, makes lemon trees very productive. Their milk may also be of great medicinal (see links below) or nutritional benefit due to its high protein content.

There are a number of health issues associated with the use of rabbits for meat, one of which is Tularemia or Rabbit Fever. Another is so-called rabbit starvation, due most likely to essential amino acid deficiencies in rabbit meat and synthesis limitations in human beings.[2]

A healthy indoor pet rabbit can live 6-12 years. They enjoy throwing around toys and chewing on cardboard. In some instances, they can even become good friends with cats and dogs. Though they are often caged in small areas, they can be free roaming pets similar to cats and dogs, often called 'house rabbits'. Large, inexpensive cages can be custom made from 'Idea-cubes', which can be found in many department stores.

Female pet rabbits may be spayed. There are some health and behaviour benefits from the neutering of male rabbits. If left un-neutered, male rabbits may spray urine in order to mark territory. Most rabbits can be aggressive towards other rabbits unless an effort is made to bond the two over time, spaying/neutering both parties may help make this process successful. It is not a good idea to simply put two rabbits together in the same cage and assume that they will get along. Even normally docile rabbits can become violent when left with an unbonded partner.

Unlike cats, rabbits cannot be declawed. Lacking pads on the bottoms of their feet, rabbits require their claws for balance, and declawing a rabbit will render it unable to stand, permanently crippling it.

Provided they are well cared for, rabbits can make friendly and playful pets. They are widely kept throughout the world, both indoors and out. Rabbits kept indoors are typically healthier and more social than rabbits kept outdoors. Housed indoors and provided with adequate damage-proofing (especially of electrical cables and house plants that may be toxic), rabbits are relatively safe from predators, parasites, disease, and temperature extremes. Rabbits kept outdoors must be provided with shelter, this shelter may be heated in winter (but many rabbits can be kept outside with extra bedding even into temperatures below freezing), but must be shaded in summer. Domesticated rabbits are most comfortable in temperatures between 10 to 21 degrees Celsius (50 to 70 degrees Fahrenheit), and cannot endure temperatures above 32 degrees Celsius (90 degrees Fahrenheit) without assistance such as fans, frozen water bottles, and deep shade. Veterinarians specializing in rabbits recommend a diet consisting of clean water, a small amount of commercial pellets and unlimited grass hay daily. Other vegetables (up to 2 cups per 5 pounds of body weight) may be fed such as: romaine lettuce (not iceberg), parsley, cilantro, dandelion, and basil. Carrots and fruits should be used sparingly. As commercial feeds are balanced to provide all of the daily nutrients that a rabbit needs, fresh vegetables are not needed daily. They should be fed sparingly and as a treat.

Domestic rabbits should be checked daily as infections and illnesses can occur very quickly. Teeth should not be too long because if they are the rabbit cannot eat. Do not attempt to grind or clip a rabbit's teeth; one is advised to seek a veterinarian. A rabbit's teeth can grow up to five inches a year, but must be worn down to maintain a healthy bite. Rabbits will wear down their teeth best if given a harder commercial pellet to chew. A rabbit's whiskers are a major sensory organ and should never be clipped.

The eyes should be clean with no crusts evident. Ears also should be clean along with any other part of the rabbit. They can also be put to sleep on their backs by making sure the head is lower than the body. Safe handling of rabbits may be taught by rabbit breeders and specialists in your area. In the United States, the American Rabbit Breeders Association is a valuable resource for both pet and commercial breeders. In Britain, the British Rabbit Council contains valuable information as well.