Cut from the article 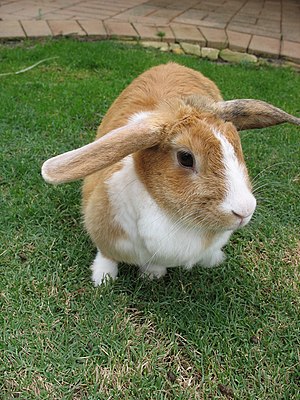 In what parts of the world are there rabbits in the wild?

This article needs information on what parts of the world rabbits live in. I'm referring to the Encyclopedia Americana, International Edition, of 1970. After reading the articles on rabbits and on hares, I'm left with the following questions:

Oh, wait. Re-reading the encyclopedia, I think it does answer the first question. Apparently all the native American species are hares, not true rabbits: (entry on "Hare":) "Hare is the generic term, while rabbit is applied properly to single short-legged European species of essentially burrowing habits whose naked, blind and helpless young are nurtured in underground nests (see RABBIT). None of the native American species have these characteristics." --Catherine Woodgold 16:36, 9 April 2007 (CDT)

I do not believe that is true. I'm getting my field guide to the Mammals of eastern north America out-momentarially. Cotton tailed rabbits are just that, and are born hairless. Be back later.Nancy Sculerati 16:53, 9 April 2007 (CDT)

Great; thanks for your help. A number of web pages give more information about rabbits in Australia; Myxomytosis mentioned in my 1970 encyclopedia was apparently only the first of at least 2 viruses released. I'm hesitant to take information off mere web pages, though. I did a quick search for library books on rabbits and they were all about how to take care of your pet. I could look harder but others may have the information closer to hand. --Catherine Woodgold 17:00, 9 April 2007 (CDT)

Here are the words I wrote and then deleted because we're not sure whether they're correct:

There are no true rabbits native to the Americas; a number of native species commonly referred to as rabbits in North America are properly classified as hares, lacking the underground nests and helpless, blind young of true rabbits.