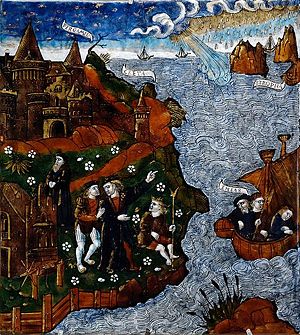 The Penates were traveling deities who went with Aeneas and his family on voyages around the Mediterranean Sea including the island of Crete. In this painting from 1530, Aeneas leaves Crete along with the Penates in the boat.

Penates or Di Penates were in ancient Roman religion were household deities or dii familiares. They were an important part of Roman religion. When a family ate a meal, they put some food on the fire as an offering to the gods. They are portable deities which can be moved from place to place.

In the Aeneid by the Roman poet Virgil, the Penates were brought by Trojan hero Aeneas along with his father Anchises and his son Ascanius on a long voyage which included a trip to Carthage to visit princess Dido as well as Sicily and finally to Italy where Aeneas founded the city of Rome. Scholars such as Elizabeth Vandiver suggest that there is strong consensus that the Penates were a Roman construction that didn't exist around the time of the Trojan war, and as a result, the Aeneid was contrived as a kind of myth to suggest to Roman readers that the Penates originated from Trojan roots. Some scholars believe the Penates marked the ascendancy of the Roman family as an institution.