Industrial cooling towers are heat rejection systems used primarily to provide circulating cooling water in large industrial facilities. The circulating cooling water absorbs heat by cooling and/or condensing the hot process streams or by cooling hot rotating machinery and other hot equipment within the industrial facilities. The cooling towers then reject that absorbed heat by transferring it to the atmosphere.

How a cooling tower works

Basically, a cooling tower intimately contacts a flow of warm water with a flow of ambient air which is not saturated with water vapor (i.e, air which contains less water vapor than it is capable of containing). That causes part of the warm water to evaporate and the air absorbs that evaporated water. The heat required to evaporate part of the water is derived from the water itself and thus causes the water to cool. This process is known as evaporative cooling.[1][2] The net result is that the air leaving the tower is saturated with water vapor and the unevaporated water leaving the cooling tower has been cooled.

To achieve better performance (more cooling), a media called fill is used to increase the contact surface area between the air and water flows. Splash fill consists of material placed to interrupt the water flow causing splashing. Film fill is composed of thin sheets of material upon which the water flows.[3] Most fill in modern cooling towers is plastic material.

The primary use of large, industrial cooling towers is to remove the heat absorbed in the circulating cooling water systems used in industrial facilities such as petroleum refineries, petrochemical and chemical plants, natural gas processing plants, fossil-fuel power plants and nuclear power plants.

The circulation rate of cooling water in a typical 700 MW conventional coal-fired power plant with a cooling tower amounts to about 71,600 cubic metres an hour (315,000 U.S. gallons per minute)[4] and the system requires a supply water make-up rate of perhaps 5 percent (i.e., 3,600 cubic metres an hour). The largest users of cooling water in a power plant are the surface condensers that condense the exhaust steam from the large steam turbines that drive the electrical generators.

If that same plant had no cooling tower and used once-through cooling water, it would require about 100,000 cubic metres an hour [5] and that amount of water would have to be continuously returned to the ocean, lake or river from which it was obtained and continuously re-supplied to the plant. Furthermore, discharging large amounts of hot water may raise the temperature of the receiving river or lake to an unacceptable level for the local ecosystem. A cooling tower serves to dissipate the heat into the atmosphere instead and wind and air diffusion spreads the heat over a much larger area than hot water can distribute heat in a body of water.

Some coal-fired and nuclear power plants located in coastal areas do make use of once-through ocean water. But even there, the offshore discharge water outlet requires very careful design to avoid environmental problems.

This article is devoted to the large-scale cooling towers used in industrial facilities. However, much smaller cooling towers of various types are used in the air-conditioning of office buildings, hotels, sports arenas, food storage facilities and many other commercial establishments.

Quantitatively, the material balance around a wet, evaporative cooling tower system is governed by the operational variables of makeup flow rate, evaporation and drift losses, blowdown rate, and the concentration cycles:[6] 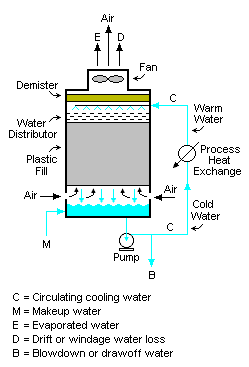 Referring to Figure 3, water pumped from the cooling tower basin is the cooling water routed through the process stream cooling and condensing heat exchangers in an industrial facility. The cool water absorbs heat from the hot process streams which need to be cooled or condensed, and the absorbed heat warms the circulating water (C).

The warm water returns to the top of the cooling tower and trickles downward over the fill material inside the tower. As it trickles down, it contacts the fan-induced upward flow of ambient air. That contact causes a portion of the water (E) to evaporate into water vapor that exits the tower as part of the water saturated air. A small amount of the water also exits as entrained liquid water called drift losses (D). The heat required to evaporate the water is derived from the water itself, which cools the water back to the original basin water temperature and the water is then ready to recirculate.

The evaporated water leaves its dissolved salts behind in the bulk of the water which has not been evaporated, thus raising the salt concentration in the circulating cooling water. To prevent the salt concentration of the water from becoming too high, a portion of the water, referred to as blowdown (B) is drawn off for disposal. Fresh water makeup (M) is supplied to the tower basin to compensate for the loss of evaporated water, the drift loss water and the blowdown water.

A water balance around the entire system is:

Since the evaporated water (E) has no salts, a chloride balance around the system is:

From a simplified heat balance around the cooling tower:[6]

Cycles of concentration represents the accumulation of dissolved minerals in the recirculating cooling water. Blowdown of a portion of the circulating water (from the tower basin) is the principal means of controlling the buildup of these minerals.

As the cycles of concentration increase, the water may not be able to hold the minerals in solution. When the solubility of these minerals have been exceeded they can precipitate out as mineral solids and cause fouling and heat exchange problems in the cooling tower or the heat exchangers. The temperatures of the recirculating water, piping and heat exchange surfaces determine if and where minerals will precipitate from the recirculating water. Often a professional water treatment consultant will evaluate the makeup water and the operating conditions of the cooling tower and recommend an appropriate range for the cycles of concentration. The use of water treatment chemicals, pretreatment such as water softening, pH adjustment, and other techniques can affect the acceptable range of cycles of concentration.

Concentration cycles in the majority of cooling towers usually range from 3 to 7. In the United States the majority of water supplies are well waters and have significant levels of dissolved solids. On the other hand one of the largest water supplies, New York City, has a surface supply quite low in minerals and cooling towers in that city are often allowed to concentrate to 7 or more cycles of concentration.

Besides treating the circulating cooling water in large industrial cooling tower systems to minimize scaling and fouling, the water should be filtered and also be dosed with biocides and algaecides to prevent growths that could interfere with the continuous flow of the water.[6] Corrosion inhibitors may also be used, but caution should be taken to meet local environmental regulations as some inhibitors use chromates.

Wet cooling towers may be categorized by their method of generating air flow, by their air-to-water flow arrangement and by their physical shape.

With respect to generating air flow through the tower, there are three types of cooling towers: 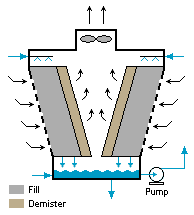 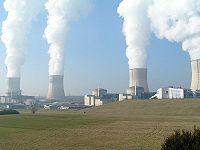 Both crossflow and counterflow designs can be used in natural draft and mechanical draft cooling towers.

Some commonly used terms in the cooling tower industry

Legionellosis (referred to as Legionnaires' disease) is a dangerous infectious disease caused by bacteria belonging to the genus Legionella. In many outbreaks of that disease, air-conditioning cooling towers have been found to be the source of the disease-causing bacteria.

Many governmental agencies, cooling tower manufacturers and industrial trade organizations have developed design and maintenance guidelines for preventing or controlling the growth of Legionella in cooling towers.[8] [9] [10] [11]