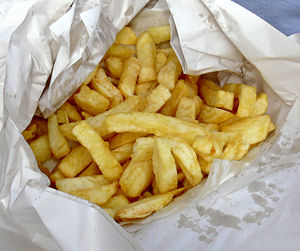 Chips can be eaten with fingers, straight from the paper, in the United Kingdom and many countries. 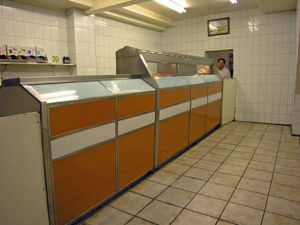 Chips are often sold in fish and chip shops, kept hot behind the counter.

Chips are strips of skinless potato that are grilled, deep-fried or baked until their outsides are crisp and approaching golden brown in colour. Ever since the sale of cooked 'shaved potatoes' in 1850s Britain,[1] chips have been a very popular snack, side order or accompaniment to fish, chicken or red meat in the United Kingdom, Ireland and many other nations, particularly those formerly part of the British Empire, now members of the Commonwealth of Nations. Fish and chips is a particularly popular combination in the UK; this meal will always include deep-fried chips when purchased from a takeaway (where food is bought for consumption off the premises), whereas at home, oven chips may be used instead. These are baked rather than fried, so are considered healthier.[2]

90% of people in the UK eat chips, the majority at least once a week, and the British in particular can be rather patriotic about them; though originating in Belgium, "the humble chip" has its own "national week", organised by chip promoters,[3] and has been identified as a vital ingredient of British culture. Furthermore, the British attitude to chips - that they are simple, down to earth, tasty fare - has been cited as an example of two central themes in British culture, namely realism and empiricism.[4]

Chips are very similar to French fries, the distinctions being that fries are usually thinner and of more regular shape; in some cases, food sold as fries in the USA and other countries would be recognised as chips elsewhere. Also, the context of eating varies, with fries confined to American-style restaurants in countries where chips predominate. In the USA, a few 'fish 'n' chip shops' have opened to cater for lovers of British cuisine, which risk confusion from diners who perhaps expect fries.[5]

Today, there are over 10,000 fish 'n' chip shops in the UK,[6] each of which supplies takeaway chips to their local community. The British overwhelmingly prefer deep-fried or oven chips, the former usually fried in beef dripping - entailing a crisis of conscience for chip-loving vegetarians - or olive oil. Chip shops may sell chips and their accompaniments wrapped first in greaseproof paper, then in newspaper. However, this practice of using yesterday's paper is dying out amidst hygiene fears; instead, chips may be sold in plastic containers that may contribute to global warming. It is difficult, then, to enjoy chips without relaxing principles of environmentalism; however, birds and other animals may be fed with chips, providing an alternative source of food for local animals.

In recent years, microwave chips have entered the market. These chips, which are sold in a box, may be eaten directly from the packaging. They are yet to supplant other types of chips.

Chips may be eaten with a knife and fork, though in informal surroundings it is possible to eat them with fingers; chip shops provide an optional wooden fork. Chips are easy to handle because, unless undercooked, they will always remain straight even when a little pressure is applied. Salt, pepper, vinegar and ketchup may be added, alongside mushy peas. Two or more people may share a plate of chips; in the UK, this may even be considered romantic; couples may be seen feeding each other.[7] Diners will add salt, pepper, vinegar and ketchup themselves - handing around this bottle of tomato sauce - though in chip shops the server may well add salt and pepper themselves. Ketchup may be squirted into one area, or spread liberally all over the chips. 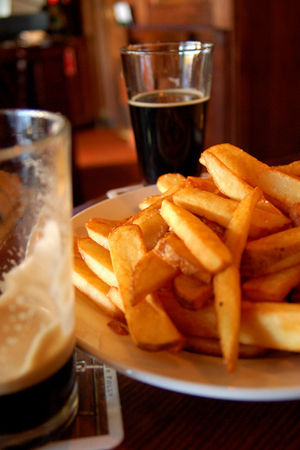 Chips go well with beer as part of a pub meal.

Chips, unlike most foods, have fewer associations with particular social classes in the UK. Though social climbers may shun chips because they identify them with the lower classes,[8] people of all walks of life may be seen enjoying chips and purchasing them in fish and chip shops; as in many pubs, it is not at all unusual to see people of obviously different backgrounds in the queue. Chips may also be served as part of a pub meal alongside beer.[9] Social climbers and up-scale restaurants may insist on calling them 'chipped potatoes'; this may be regarded as pretentious. Additionally, the practice of dressing them up as haute cuisine - see the gallery of French fries - might be seen as a little bit vulgar in the UK, possibly receiving a cool reception amongst socially aware chip-eaters.

Unfortunately, "chips with everything" is a popular UK saying indicating how a love affair with chips may contribute to poor health; their presence in British schools has contributed to the poor diet of some children. When eaten in large quantities, they are considered junk food.[10] However, the British Potato Council has published several statistics in which oven chips compare favourably with other foods; for example, a small bar of milk chocolate contains more fat than an average portion of oven-baked chips. They also point out that thick chips absorb less oil than thin ones, so chips may trump 'fries' in the health stakes.[11] Even chip shop chips can be healthier than certain foods; a bag of takeaway chips contain less fat than a cheese and pickle sandwich.[12] The Council has defended itself against accusations of wasting public money on trivial matters by arguing that showing the nation how to tell the difference between health yand unhealthy chips is of some importance.[13]

The presence of chips in British culture is all-pervasive, meaning that chips are unlikely to disappear any time soon, especially given their apparent role in saving the country from Nazism; according to fish and chip promoters, this meal was a decisive force in defeating Adolf Hitler and winning the Second World War.[14]