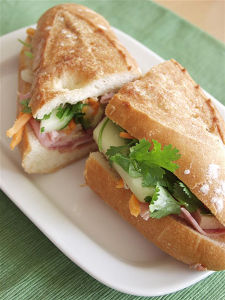 (CC) Photo: Barron Fujimoto, via Flickr
This baguette-style sandwich consists of ham and vegetables on a small, crusty loaf

Sandwiches, also known in the United Kingdom as pieces or sarnies, consist of a variety of fillings placed between two slices of bread. They appear in most cultures that make bread or close equivalents; the Italian version is Tramezzini, and in French le sandwich.

Frequently eaten as a quick snack food, sandwiches are particularly popular at lunch time. Almost 11 billion sandwiches are consumed every year in the United Kingdom alone. British commercially produced sandwiches form an industry worth £4.6 billion and employing over 320,000 people.[1] These impressive statistics are still somewhat dwarfed by American sandwich consumption, which accounts for 45 billion sandwiches every year.[2] 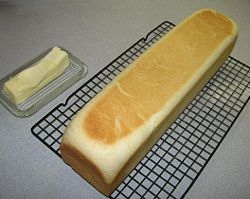 The most popular commercially produced sandwich fillings in the UK are:[4] 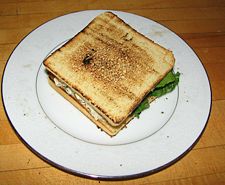 Home-made sandwiches make up the majority of sandwich consumption. These tend to favour sweet fillings such as jam, peanut butter and chocolate spread in contrast to the savory fillings marketed commercially. Home-made sandwiches frequently make use of leftovers or whatever is available in the fridge. This has lead to some worry over food safety as such fillings may be close to their use-by dates and, if left sitting in a un-chilled lunch box for much of the day, are prone to going off.

When choosing a sandwich filling, some care should be given to the contents. A balance must be struck between the dry and liquid fillings. Too little butter or mayonnaise and the sandwich will be dry and unpalatable. Too much liquid in the filling and the sauces may run out of the sandwich. Generally sandwiches that are to be toasted should have a little more water than normal to allow for some evaporation while cooking.

The well known creation myth of sandwiches credits them to John Montagu, the 4th Earl of Sandwich (1718-1792). So the story goes, he was an avid gambler. While playing poker, he instructed a servant to bring him a thick slice of beef between two slices of bread. The authenticity of this story is doubted as the 4th Earl had long-running digestive problems and could only eat liquid foods. However, the first mention of a sandwich in literature was by Edward Gibbons, author and historian, in his journal on November 24 1762. In this he mentions seeing some wealthy gentlemen eating sandwiches in a coffee shop.

Also in the year 1762, the London Beef Steak Club, which met regularly at the Shakespeare Tavern, claim to have created the sandwich. The Beef Steak Club was a very exclusive club for the gentry of the time. The membership was initial limited to just 24, rising to 25 to accommodate the Prince of Wales. The 4th Earl of Sandwich was also a member of this club.

However, the above stories only serve to connect the name with the food. The actual item that we how call a sandwich seems to be significantly older than its name. In fact, probably as old as sliced bread.

The first account of a sandwich-like meal is from 1st century BC. The Rabbi Hillel, an Elder in Palestine, made a sandwich-like meal using two matzohs breads, some nuts, apple, spices and herbs. The combination had an element of religious significance as the meal served as a reminder of the suffering of the Jews when enslaved in Egypt.

Throughout early English literature there is mention of pieces of bread and cheese or bread and meat as the format of a common meal. In the Old Wives Tale by George Peel we have the line, "I took a piece of bread and cheese and came upon my way." The use of the term 'a piece' or 'pieces of' is still found in common use in some local dialects of English. A modern example of pieces can be found in the Glasgow folk song, The Jeelie Piece Song (Skyscraper Wean), in which a child laments at the passing of the custom for his mother to throw his pieces to him for lunch out their tenement window. The post-war construction of high rise flats (apartment buildings) made this practice impractical.


Seven hundred hungry weans will testify to that.
If it's butter, cheese or jeely, if the breid is plain or pan,
The odds against it reaching earth are ninety-nine tae wan.

During the middle ages, another variation on the sandwich theme was the trencher. These trenchers were large flat, frequently stale, pieces of bread that were used as a substitute for plates. Food was placed on top of the trencher or in a hollowed-out "trench". The juices or sauce from the food would soften the trencher, making it more edible.

The French word for sandwich is sandwich. After first mentioning the Earl of Sandwich, the article in the Larousse Gastronomique about sandwiches goes on to say:

Since the most faraway time it has been the custom in the French countryside to give workers in the fields meat for meals enclosed between two pieces of wholemeal or black bread. Moreover, in all the south-west districts it was customary to provide people setting out on a journey with slices of meat, mostly pork or veal cooked in the pot, enclosed, sprinkled with their succulent juices, between two pieces of bread. Sandwiches made with sardines, tunny fish, anchovies, sliced chicken and even with flat omelettes were known in France well before the word, coming from England, had entered into French culinary terminology.[5]

The introduction of the sandwich to America is credited to Miss Eliza Leslie. Born in Philadelphia in 1787, she grew up in England, where she would have encountered sandwiches. In 1837, her book, Miss Leslie Directions for Cookery, was published. This book contained instructions of making a ham sandwich. By the 1860's, ham sandwiches had become popular through the USA; however, it was not until Mrs D A Lincon published her book, the Boston Cooking School Cook Book in 1896, that alternative fillings became popular within the states.[2]

In the early 20th century, several technological advances were to have influence on sandwiches. The introduction of the Toastmaster, the first modern bread toaster, in 1926, made toasted sandwiches more popular. The introduction of pre-sliced bread to American shops by the manufacturer Wonder Bread in 1930, shows the effect that sandwich demand was having on the bread industry. By 1933, pre-sliced bread made up 80% of the American bread market.

In 1974, an Australian electronics company, Breville, introduced a new style of sandwich toaster. This toaster opened like a book and when closed, squeezed the pieces of bread gently together. This allowed toasted sandwiches to be made with hot fillings more easily than before. In the first year of production alone, Breville sold over 400,000 of its toasters. They proved to be particularly popular in Britain. Variations of these sandwich presses are now made by several well known electronics companies and are commonly used in both homes and commercial sandwich outlets.[6] 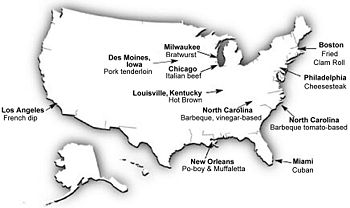 Regional variations in the US

In 2007 the American food giant Kraft Foods is losing market share as consumers switch to cheaper store brands, costlier gourmet-style products or more innovative offerings from competitors like ConAgra, Hormel and Procter & Gamble. To help reverse the trend Kraft is increasing the company’s huge marketing budget — estimated at $1.4 billion a year — by an additional $300 million to $400 million. The goal is to persuade consumers that Kraft’s standard products can meet their changing needs. A case in point is Kraft Singles sliced cheese; Kraft will devote a campaign that begins October 1, 2007 to the glorification of the grilled cheese sandwich. The television, online, print and retail campaign carries the upbeat theme “Have a happy sandwich.” In one commercial, a battle between a pig and a fire-breathing dragon ends when the pig holds up a cheese sandwich as a shield; they share the resulting grilled treat; in another animated commercial, Little Red Riding Hood and the Big Bad Wolf picnic on a sandwich as Frank Sinatra sings on the soundtrack “We may never pass this way again.” In a third commercial, a grilled cheese sandwich appears dressed as a superhero, a bunny, an angel and Santa Claus. Sales for Kraft Singles, one of Kraft’s largest brands, totaled more than $600 million last year; Kraft spends $40 million annually to advertise the brand.[7]