This article is about the popular American snack. For other uses of the term Hot Dog, please see Hot Dog (disambiguation). 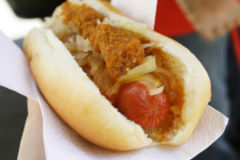 (CC) Photo: Robyn Lee
A hot dog with a lot of toppings.

A hot dog is a form of sandwich, or alternatively the sausage that goes in the sandwich, which is also called a frankfurter, frank, weenie, wienie, wiener, dog, or red hot. It is made using a German-style frankfurter or dachshund sausage that is either boiled, fried, or grilled. Since hot dogs are always already precooked when purchased, they merely need to be warmed: this means that they can also be heated in a microwave oven before being served. The warmed hot dog, however it is prepared, is placed inside an elongated soft bread bun that has been split vertically along its length. A variety of toppings may be added, the most common of which are tomato ketchup and mustard. Other toppings may include lettuce, chili sauce, relish, onions, sauerkraut, grated cheese, and spices such as celery salt or pepper. The Sonoran hot dog, a popular item in Arizona, is grilled with bacon wrapped around it, then served with six or more of the toppings listed earlier, plus mayonnaise, refried beans, and hot peppers.[1] The American hot dog market is worth over $3.9 billion annually. July is American National Hot Dog Month and 1.5 million hot dogs are consumed on the 4th of July alone.[2]

There is some disagreement about the origin of the hot dog and its names. The sausage is German. The city of Frankfurt in Germany claims to have been the creator of the sausage some 500 years ago. The sausage was taken to American by German immigrants. One such immigrant, Charles Feltman, a butcher, opened a shop selling these sausages in 1867 on Coney Island in New York City. He is recorded to have sold 3,684 dachshund sausages in his first year alone. He served his sausages inside a milk roll.

By 1893, these sausages had become popular snacks at ballgames. However, the dog was yet to receive its name tag. There are several legends surrounding the etymology of the words 'hot dog.'

Sausages hold symbolic meaning in the mock religion Discordianism. According to one of its main myths, after Eris rolled the golden apple into the wedding of Peleus and Thetis, she ate a sausage in a hot dog bun. This myth is the basis for one of the five pillars of Discordianism.