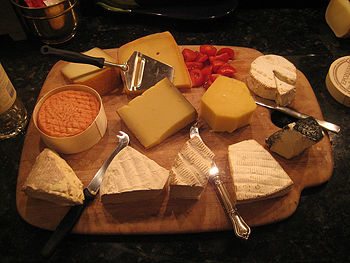 Cheese is a dairy product made from milk curd. Cheese is most commonly made from cow's milk, but is also made from the milk of other mammals such as sheep, goats, and buffalo. There are hundreds of varieties of cheese made throughout the world, all varying in texture and taste. Cheese is frequently enjoyed by itself, as an ingredient in thousands of dishes, or, in some cultures, with a glass of wine.

There is no definitive answer as to when and where cheese originated. The popular legend is that it was discovered by an Arab nomad who had filled his saddlebags with milk before embarking on a trip across the desert. The nomad was shocked when he opened his bags later to find his milk had separated into liquid and semisolid parts. The saddlebag was made from an animal stomach and contained the coagulating enzyme rennin. The rennin, coupled with the heat and the motion of the horse, caused the curds to separate from the whey. While there is nothing to verify this story, it is plausible that cheese was discovered in a similar manner. Most likely it was first discovered in the Middle East and Central Asia prior to 6,000 BC. Cheesemaking was later enhanced in Rome and the knowledge was spread throughout Europe with their conquering legions. The process was further developed in the Middle Ages in monasteries, creating many of the varieties of cheese we still enjoy today.

The first step in making cheese is acidification, which is the process of lowering the pH content of the milk. This is done using a bacterial culture known as a starter, such as Lactococcus lactis. The starter bacteria feeds on the lactose in the milk and as a result creates lactic acid which lowers the pH. There are two basic types of starter bacteria; mesophilic bacteria which works best at room temperature and thermophilic bacteria which is better at higher temperatures. The next step is to begin the coagulation process, which separates the milk into curds and whey. Coagulation can occur during the acidification process, however it is common practice to use enzymes to ensure the curds develop with a lower moisture content while remaining soft. These enzymes come from a substance known as rennet which is typically taken from the fourth stomach lining of calves. The primary enzyme in rennet is chymosin. Chymosin causes casein, the primary protein group in milk, to coagulate. Today, most chymosin used in cheese making has been genetically engineered and is no longer taken from calves.[1]

When the coagulation process is complete, the curd is heated up and cut. This is done to allow the whey to drain completely from the curd, leaving a substance known as hard curd. Some whey is allowed to remain depending on the desired moisture content of the cheese. Salt is added for flavoring and to prevent the growth of unwanted microbes. The curds are then pressed together by hand or with a cheese press and then shaped as desired. At this point, some cheeses such as cottage cheese are in a finished, ready to eat state. However, most cheeses are aged for a period of time and allowed to ripen. There are many types of bacteria and time frames used to ripen the cheese, each of which determine the type of cheese being made. During the ripening process, a rind is placed on the outside of the cheese. This can occur naturally or artificially.

The above process describes the basic natural process of cheesemaking. For a variety of reasons, a cheese may undergo additional industrial processing. The reasons range from making the food more stable, or to blend more easily as an ingredient, or to reduce cost by adding by-products. Their taste is not likely to be as refined as that of a carefully made artisanal cheese, but they may be adequate for their purposes, such as constituents of shelf-stable snack food.

Specific "standards of identity" are established by governmental bodies. Some representative terms include:[2]

Around the globe, cheeses are served with any meal from breakfast to dessert. The flavor and texture of cheese make it best served at room temperature. This can be achieved by removing the cheese from the refrigerator for at least 30 minutes prior to eating. Fresh cheeses, such as cream cheese, are the exception and should be enjoyed chilled. Cheese should not be served pre-cut, as it will dry out quickly, rather it should be sliced as needed.

Most cheeses should be stored in the refrigerator, wrapped and stored in a loose fitting bag to keep moisture in. Harder cheeses, such as Parmigiano-Reggiano, can be stored safely for several weeks, while fresh cheeses will spoil in about a week because of their high moisture content. Avoid storing with other potent aromatic foods as the cheese will absorb the odors and distort the taste.

Cheese contains a concentrated amount of the positive and negative benefits that are found in milk. It is a good source of protein, calcium and vitamin A, while being high in fat and cholesterol. Nutritional content varies among cheeses and is a reflection of the type of the milk used in making it.[3]