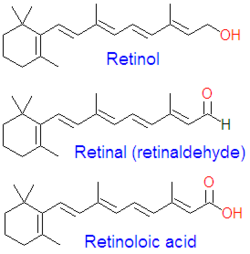 Vitamin A, or retinol, is the immediate precursor of two important biochemicals, retinal and retinoic acid. Ultimately, retinol is derived biochemically from carotenes such as

-carotene, but is not derived from similar carotenoids such as lutein or zeaxanthin. Retinal plays a critical role in vision, while retinoic acid is an intracellular messenger chemical that affects gene transcription. Although plants do not produce retinol, they do produce carotenes which can be converted to retinol in the gastrointestinal tract.

Deficiencies of vitamin A has been associated with a number of maladies related to[1]:

Retinol is synthesized from

-carotene biologically by a dioxygenase mechanism in which the 15 & 15' carbons are dioxygenated by molecular oxygen with carbon-carbon bond cleavage. In experiments using tritium (H3) and carbon-14 (C14) labels, no loss of the labels occurs during the conversion of carotene into two molecules of retinol.[2]