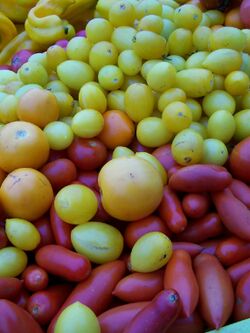 © Photo: Petréa Mitchell
Tomatoes come in a variety of colors and shapes.

The tomato is the fruit of the short-lived perennial (cultivated as an annual) Lycopersicon lycopersicum.

Tomatoes are believed to have originated in the Andes, but are first known to have been domesticated in Mexico. Their name comes from the Nahuatl word tomatl. The Spanish brought tomatoes to Europe, where they quickly entered Spanish and Italian cuisine.

In northern Europe, however, the tomato was long grown only as an ornamental plant because the fruit was thought to be poisonous. The tomato is a member of the nightshade family, and is a close relative of the poisonous plants belladonna and jimson weed, and in fact the roots and leaves of tomato plants are poisonous.

Tomatoes can be grown anywhere that the temperature does not fall below 55°F during the growing season. Seeds are planted in early spring, and the fruits ripen in the summer or fall depending on the variety.

Tomatoes are used raw like a fruit in salads and sandwiches. Cooked, they are used in soups, casseroles, and in sauces. A large part of the tomato crop is processed into juice, paste, canned tomatoes, and ketchup.