Victor-Marie Hugo (1802-1885), poet, novelist and playwright, was the dominant French writer of the 19th century, and also a considerable political figure.

Born on 26 February 1802 in Besançon, he was the third son of Léopold Hugo, a Major in the French revolutionary army, originally from eastern France, and his wife Sophie (née Trébuchet), who came from Brittany. His parents soon split, but though his father, eventually promoted to General, publicly took a mistress, his mother made trips to see him on his postings, taking the children both to Italy and through war-torn Spain. She eventually settled in Paris, which Hugo always regarded as his home.

After the Napoleonic wars, Hugo first came to fame as teenage prodigy, writing prize-winning poems in the classical French style. At this time he was a monarchist. By 1824, at the age of 22, he was already implicitly comparing himself with Byron, at that time the meteoric star of European literature.[1] The first deviation from classicism came with a short Gothic novel, Han d'Island, and the first departure from monarchism, three years later, in 1827, with a Bonapartist ode. In 1827 he published his play Cromwell, with a famous and influential Preface; and in 1829 his poetry broke completely from classical constraints, with the collection Les Orientales, which combined technical innovation with the popular support of Greece in its independence struggle. These two works, together with Hernani, put him at the head of the romantic movement in France.[2]

Just before the 1830 revolution installed Louis-Philippe as king, the Comédie Française, home to the classical drama, produced his definitely non-classical play, Hernani, which was performed to near-riots, with audiences vehemently divided. In the following year he published his first full-length novel, Notre-Dame de Paris 1482 (probably most commonly known in English as The Hunchback of Notre Dame because of a famous film starring Charles Laughton in the title role; English translations of the book have various titles), but immediately returned to play-writing and poetry. In 1845 he was elected to the Académie Française, an honour he might well have scorned if it had not enabled him to be made a peer of France, which was his next step.[3]

Meanwhile, at the age of 20 he had married a childhood friend, Adèle, the marriage originally opposed by both sets of parents. An established, popular and wealthy writer, he now took a mistress, Juliette Drouet, who remained with him for the rest of her life, despite his taking at least one other mistress, Léonie Biard, and frequently resorting to prostitutes, servants, actresses and others, into his old age.[4] In 1843 his recently married daughter and favourite child, Léopoldine, died in a boating accident; and in fact his two sons by Adèle both predeceased him, while his other daughter became insane.

In the 1848 revolution Hugo was elected to the National Assembly, for which he played an active and dangerous role in helping to stamp out the continuing proletarian revolt. At first he supported Louis-Napoleon, then turned against him, becoming a thorough-going republican. As such he was a leader of the ineffective resistance to Louis-Napoleon's coup d'état. After risking his life several times, he escaped to Brussels, where he published a scathing attack, Napoléon-le-Petit, which, smuggled into France, had a great clandestine success. From Brussels he was obliged to move to Jersey, where he produced and arranged for the publication of Châtiments, a poetical onslaught on the French dictator, with considerable technical innovation.[5] 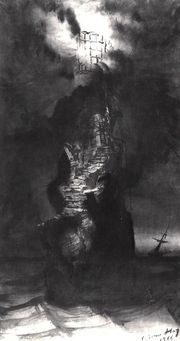 Hugo did not expect to stay long in the Channel Islands, anticipating that the Second Empire would be short-lived. While there he had a short-lived flirtation with his own brand of spiritualism. Expelled from Jersey, due to pressure from the French government, he moved to Guernsey, where he accepted his exile sufficiently to buy a house. A new collection of politically inoffensive poems got past the French censorship, its commercial success showing his continuing popularity. During his time in the Channel Islands he was engaged in international efforts to secure the abolition of the death penalty, one of the few causes in which he was consistent throughout his life. In the 1860s he completed three of his major novels, Les Misérables(started before the 1848 revolution), Les Travailleurs de la Mer, and L'Homme Qui Rit, a philosophical fantasy set in England at the end of the 17th and beginning of the 18th centuries. His William Shakespeare took the subject of the title as the starting point for "a literary manifesto for the 19th century".[6] Towards the end of the decade he spent much time in Brussels, where Adèle died suddenly in 1868.

On the outbreak of the Franco-Prussian war, Hugo returned to Belgium, then, after the declaration of the Republic, to Paris, where he was active in its defence. Elected to the new National Assembly, meeting in Bordeaux, he resigned because of the exclusion of Garibaldi. Although he returned to Paris for the funeral of his son Charles, he left again in order to avoid being trapped into the Commune.[7]

In 1872 he was again in Guernsey, writing his last great novel, Quatrevingt-Treize ([Seventeen]-Ninetythree), a story of the Vendée rising against the 1789 Revolution. It was published in 1874, by which time he was back in Paris. In 1876 he was elected a senator, and in 1877, against the background of a possible monarchist takeover, he published Histoire d'un Crime, his account of the 1851 coup d'état, written previously but now updated.[8]

In 1878 he had a complete breakdown of health, and (temporarily) of sexual potency, being taken to Guernsey to recuperate, but soon returning to Paris. From now on he virtually ceased to write, but this was disguised by the continuing publication of works written previously, many of which came out only after his death. Juliette Drouet died in 1883 and Hugo himself on 22 May 1885. An immense crowd (two million by some estimates) followed his body to the Panthéon. Amid the prolonged pomp of a state interment, Hugo achieved his final dramatic effect by specifying a pauper's hearse.[9]

Hugo admired Voltaire. From the previous generation, Chateaubriand had an influence on him, possibly more through his breadth of vision than anything else. Among his contemporaries, the critic Sainte-Beuve (who also happened to be the lover of Adèle) helped to guide him, and he was always quite ready to borrow other people's ideas. Despite his general contempt for the "English", he was influenced by British writers, notably Shakespeare and Scott.

His Préface de Cromwell swept together many ideas prevalent in the romantic movement, and extended them, having a considerable impact. Later his William Shakespeare also influenced those sympathetic to him. His poetry and prose both helped in the contemporary idealisation of childhood.

The phenomenon of Hugolatry started quite early in his lifetime, but he was also reviled, partly on account of unpopular political stances, partly because of his opposition to the Roman Catholic Church. The next generation of French writers continued to acknowledge his supremacy. Edmond Rostand (author of Cyrano de Bergerac), on completing the elaborate gardens of his house near Cambo-les-Bains, placed there three busts, of Shakespeare, Cervantes, and Hugo. In the 20th century some movements in French literature were conscious reactions against his writing, but André Gide, on being asked his most admired poet, still felt obliged to answer "Victor Hugo, alas".