Brittany (Bretagne in French), otherwise known as the Armorican peninsula, is the most westerly region of metropolitan France, reaching into the Atlantic Ocean between the English Channel and the Bay of Biscay.

The Armorican peninsula has rocky coasts to the north and south, visually striking in places, but attains no great heights inland, the Monts d'Arrée reaching only 385 metres. The coastline to the west holds the naval port of Brest. In the north is the ferry port of Roscoff.

There are traces of human activity as early as the Lower Palaeolithic era. Much later, the adaptation to new conditions as glaciation retreated and forests took over inland, meant that in Neolithic times, settlement tended to be along the coast. Brittany is particularly noted for its megalithic remains: menhirs both solitary and in long rows, and tombs of various types, including Barnenez on the north coast, the largest cairn in Europe, constructed in two phases hundreds of years apart. During the megalithic period, there was extensive trade with other parts of Europe, but the peninsula seems to have lagged behind other regions in the developing use of metals. A degree of celticisation (how much is uncertain) followed.

A significant westerly point, the isle of Ouessant (anglicised as Ushant) was known by repute to early Mediterranean geographers, showing that to some extent there was trade along the coasts.

Historical records begin with Julius Caesar's conquest of Gaul. In central Brittany, near Huelgoat, there are the remains of a settlement corresponding to his description of an oppidum, or fortified settlement.[1] His account of the conquest shows a combination of ruthless extirpation of the ruling class, conciliation and romanisation. Several uprisings had to be put down before Armorica was finally integrated into the Roman empire. Within the empire, Armorica benefited from its internal trade, supplying salt and more specialised luxury products.

With the collapse of the Empire in the West, However, Armorica was one of the first areas to be abandoned, and it is likely that it lost the prosperity it had had. In the absence of definitive evidence, there is continuing dispute over how far the "Breton" population which now emerged represents those Celts who had been romanised, and their language which had continued alongside Latin, and how far that population is the result of migration from the British Isles, under pressure of the Germanic invasions. Placename evidence indicates that there was substantial settlement of the migrants along the coasts, if not inland, and it appears that the bulk of them came from Wales. As a result of these movements, by the end of the 6th century contemporary chroniclers were referring to the former "Armorica" as "Britannia", a name previously associated only with the island of Britain. The newcomers had a Celtic form of Christianity, with its own forms of ecclesiastical discipline, its own method of calculating the date of Easter, and its own tonsure. As in Britain, there was controversy when this tradition came up against the practices of the Roman church.

The Bretons, the Franks and the Vikings

While the new settlement was occurring on the coasts, two other ill-understood processes were interacting with it and with each other. One was that three realms (four if the area around Nantes is considered) were consolidating and then merging into one. The other was that the Franks were moving south from what was Belgium, taking over what is now France, and trying to establish their overlordship of the Breton peninsula. At various times, the French kings and Carolingian emperors beat the Breton Counts or Dukes or Kings into submission. At other times, the local leadership prevailed. The issue was eventually resolved by two events, the defeat of the French king, Charles the Bald, in 851 at the battle of Jengland, thanks to the tactics of the Breton light cavalry; and the submission later that year of the Breton king, Érispoë, who was nevertheless recognised as a subordinate king, with territories which included the areas around Rennes and Nantes. This effectively established Breton independence.

Soon after the beginning of the tenth century, Brittany, like the north of France, was all but overwhelmed by attacks from the Vikings, who not only harried the coasts, particularly in the south around Nantes, but also established settlements. Unlike the Vikings who took over Normandy, however, those in Brittany did not have a dominating leader, and they were eventually driven out. The Normans took over the Cotentin peninsula, which had previously been part of Brittany, fixing that boundary of the province on a permanent basis.

The feudal system, with its hierarchy from serfs to nobility emerged in Brittany much as in France and other realms of western Europe. The power of some lords continued to threaten the Duke, and that in turn compromised Brittany's independence. It came at one time under the sway of the Plantagenet kings of England, at another under the direct rule of the French monarchy. Breton had already, after 1112, ceased to be the language of the ducal court. Nevertheless, the influence of the monarchies, with their developing use of officials dependent on the ruler, strengthened Brittany's central administration, and their rule also firmly incorporated the area around Nantes into the duchy.

The early stages of the Hundred Years War also saw a devastating civil war between two rival claimants to the dukedom, partly coinciding with the first ravages of the Black Death. 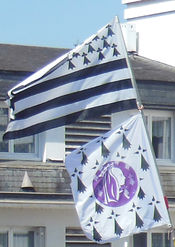 © Image: Martin Wyatt
Breton flags at an independence demonstration. The lower one shows the Duchess Anne, the last ruler of an "independent" Brittany.

From the beginning of the 15th century, a succession of strong and astute dukes succeeded in establishing various degrees of autonomy. The male line ended in 1488 when Francis II was succeeded by his ten year old daughter Anne. Although Anne married two kings of France in succession, she kept the administration of Brittany separate and its rights intact. She died in 1514, and in 1532 the king manipulated the Estates of Brittany into requesting a union with France, though with some rights secured.