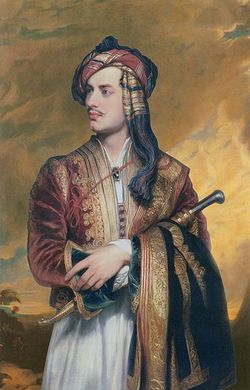 George Gordon Byron, 6th Baron Byron (January 22, 1788 - April 19, 1824), called Lord Byron, or simply Byron, was an English romantic poet, known not only for his poetry, but also his very unconventional lifestyle and revolutionary attitude. The literary figure of the Byronic hero, marked by passion, talent and rebellion, pervades Byron's work and influenced later romantic poets. Due to his financial and personal engagement in the Greek War of Independence, Lord Byron is considered a national hero in Greece.

The son of Captain "Mad Jack" Byron and his second wife, a Scottish heiress, Catherine Gordon, Byron was born on 22 January 1788. When he was three his father died, having wasted his wives' fortunes. At the age of ten he became the sixth Baron Byron of Rochdale on the death of his great-uncle, inheriting the family house of Newstead Abbey, stripped by the profligacy of his forebears. He went to Harrow and Cambridge, where he set about getting seriously into debt.[1] While at Cambridge he produced his first serious publication, Hours of Idleness, mingling fairly conventional lyrics, free translations from Greek and Latin, and a tale or two, with some political and satirical pieces. Its sarcastic reception by the Edinburgh Review brought out Byron's satiric viciousness in English Bards and Scotch Reviewers, in which he attacked most living poets, and held up the classical authors John Dryden and Alexander Pope as models. It was a lively piece of work and sold well, but he later regretted his scathing opinions.[2]

In 1809 he and John Cam Hobhouse set off for the Mediterranean, travelling by way of Portugal, Spain, where he visited the scenes of recent battles in the Peninsula War, Sardinia, Malta, and Albania (acquiring the clothing shown in the portrait) to Greece. After visiting Constantinople and swimming the Hellespont, a feat of which he was very proud, he parted from Hobhouse and went to Athens and other parts of mainland Greece. He returned to England with the draft of the poem which made him an unequalled literary sensation, Childe Harold's Pilgrimage.[3]

Having started as a defender of the classical tradition, Byron now produced in the first two cantos of Childe Harold a work that was vigorously romantic. It is largely a topographical poem, in Spenserian stanzas, describing scenes that are wild, savage, or otherwise dramatic; but they are seen through the eyes of a particular individual, a melancholy aristocratic outsider, not too different from Byron himself.[4] The effect was immediate. Byron wrote: "I awoke one morning and found myself famous."[5] The poem made the fortune of his publisher/bookseller John Murray: but, although heavily indebted, Byron at this stage thought it not fitting to his aristocratic position to accept money for his poetry.[6]

He was now lionised by London society, and became involved in sexual relationships with various women, including Lady Caroline Lamb, who later described him as "mad, bad and dangerous to know" (terms which might have been applied to herself), and his half-sister Augusta Leigh, his father's daughter by his first wife. He also met Annabella Milbanke whom he later married. His poetry at this time was most conspicuously in four "oriental tales", featuring moody Byronic heroes. These sold well, though a satire on London society did not. After his marriage in January 1815 he was working on Hebrew Melodies, a small collection of poems which had been requested from him. It included some of his most anthologised pieces: She walks in beauty, Oh snatched away in beauty's bloom, and The destruction of Sennacherib ("The Assyrian came down like a wolf on the fold").[7]

The marriage ended in separation, resulting partly from (well-founded) suspicions of incest and homosexual activity with young men, and in 1816 Byron fled into voluntary exile. His journey via the Low Countries and Switzerland to Italy was the basis of his third canto of Childe Harold, with its famous stanzas on Waterloo ("There was a sound of revelry by night") and one of his many judgments on Napoleon ("There sunk the greatest nor the worst of men"). In Switzerland he met Shelley and struck up an immediate friendship with him. Childe Harold's third canto, written as he travelled, was published within the same year,[8] and was soon followed by the fourth and final one, dealing with Italy. Between these two had come Manfred, the first of his dramas not intended for performance (though one of them, Marino Faliero, was put on for a week in London, much censored).[9] After travelling around Italy, he eventually settled for a while in the Venice area. With the renewal of Childe Harold Byron had started to drive bargains for his poems and to use the proceeds for income. The sale of Newstead Abbey in 1817 and the lesser expense of life in Italy enabled him to put his finances into order.

Byron in Italy pursued his previous course of love affairs with people of various social standings, but he also renewed his friendship with Shelley, who had now moved to Pisa, to which Byron decided to relocate. They had strongly differing views, which Shelley illustrated in his poem Julian and Maddalo. Their relationship had become strained by the time of Shelley's death, which affected Byron deeply, the more as it followed on the death of Allegra, his daughter by Claire Clairmont. Byron continued to produce a series of works of differing characters. In 1819 the first two cantos of Don Juan were brought out anonymously and without the publisher's imprint, creating a storm of literary criticism and high-minded disgust, though the success of cheap pirated editions showed that the poet now had a following outside the British gentry. The poem eventually took its innocently rampant hero from Spain to a Greek island, the harem of the Sultan, the siege of Ismail and the court of Catherine the Great, who, after taking him for her lover, sent him on a mission to Britain, enabling a protracted account of some aspects of society. It was written in ottava rima, which gave free play to Byron's apparently slapdash style and improbable rhymes. Much of it was unpublished at his death, and it was uncompleted.[10]

In Italy Byron was on the fringes of the anti-Austrian, proto-nationalist movement, but he abandoned that when the cause of Greek independence made its claim on him. The Greek rising against Turkish rule started in 1821, and a constitution was adopted in 1822. European governments, apart from Russia, were mainly hostile to the movement, but there was considerable popular sympathy. In Britain this centred on the London Greek Committee, whose request for Byron's support made him decide to go to Greece himself. Byron was now living in Genoa, and he set sail from there in July 1823 with military and medical supplies. He went first to Cephalonia, at that time part of the British protectorate of the Ionian isles. From there, after consideration, he made a hazardous journey to the seat of the ineffective Greek government at Missolonghi. He died at Missolonghi, probably of a fever, on 19 April 1824.[11]

His death was reported all over Europe, and had the effect of stimulating greater support for the Greek cause.[12]

His lifestyle as an extravagant aristocrat, along with his excesses in the field of love and his accumulation of huge debts made him one of the most talked about and fascinating personalities of his time. Despite his flamboyance, he did seek views on his poems and amended them.[13] Having been advised not to eat meat after his first tour of Greece, his diet was largely vegetarian.[14]

Coleridge wrote of him: "So beautiful a countenance I scarcely ever saw . . . his forehead so ample and yet so flexible, passing from marble smoothness into a hundred wreathes and line and dimples correspondent to the feelings and sentiments he is uttering."[15] When he thought his appearance was degenerating to the extent that he was no longer able to attract potential lovers (and in particular his page Lukas) it was a severe blow to him:

My days are in the yellow leaf;
The flowers and fruits of love are gone;
The worm, the canker and the grief
Are mine alone.[16]

The sales of Walter Scott's poems were an unprecedented phenomenon,[17] but Byron outdid him to such an extent[18] that Scott soon gave up publishing works in verse. Both of them had a European reputation and influence. As their brand of romanticism has fallen out of favour, it is now difficult to realise the significance of Byron's extended works which are his main contribution to literature. Nevertheless, Bertrand Russell felt impelled to include a chapter on Byron in his History of Western Philosophy, concluding "Like many other prominent men, he was more important as a myth than as he really was. As a myth, his importance, especially on the Continent, was enormous."[19]

Byron was an extremely prolific writer. In 1832 his publisher, John Murray, released Byron's complete works in 14 volumes in duodecimo, including a biography by Thomas Moore. Later editions were published in 17 volumes.