Sir Walter Scott(1771-1832) was a prolific Scottish writer, considered the inventor of the genre of European historical fiction. He originally had a great success with romantic narrative poetry.

Walter Scott was the son of an Edinburgh lawyer, who was a strict Calvinist, though his mother seems to have had a less stern outlook and an interest in ballads, proverbs and tales. At the age of 18 months he lost the use of his right leg, and was sent to live with his paternal grandfather near Kelso in the Scottish Borders. He never fully recovered the use of this leg, but otherwise for the first part of his life was healthy and strong. From the age of three he was brought up mainly in Edinburgh. Scott was from an early age enthralled by tales and the Scottish ballads. He studied as a lawyer and was admitted to the Bar in 1792. His collecting of Border and other ballads, which he "improved" if the improvement occurred to him, began in these years. In 1797 he married Charlotte Charpentier, and in the same year was appointed Sheriff-depute of Selkirkshire, the appointment, like most at that time, being largely due to influence. In 1802/3 his ballad-collecting activities resulted in the publication of The Minstrelsy of the Scottish Border, a milestone in his life and a significant development in Scottish literature. Until now he had been based in Edinburgh, but in 1804 the Lord Lieutenant of Selkirkshire insisted on his residing in the county, though in 1806 he was also appointed Clerk of Session, which involved attendance in Edinburgh. (This did not add to his income until 1812, when his predecessor accepted a pension instead of the salary for the office.) He rented a house at Ashestiel. In 1805 he published his first major poetical work The Lay of the Last Minstrel, the verse form being said to have been derived from hearing a recitation of Coleridge's Christabel.[1] Of this, his biographer Lockhart wrote: "In the history of British Poetry, nothing had ever equalled the demand for the Lay of the Last Minstrel." [2] The success of this and later poems of the same nature led to his introduction to English literary and court circles. In the same year he took a one-third share in James Ballantyne's printing firm, the beginning of a disastrous entanglement with that firm and the publishing businesses of John Ballantyne and Archibald Constable. He also started work on editing well-known writers of the past, continuing with this till 1814. He continued with his narrative poetry until 1817, reaching the height of his popularity in this field in 1810 with The Lady of the Lake, which took his story-telling into the Scottish Highlands for the first time. In 1812, however, his fame was eclipsed by the even greater success of Childe Harold's Pilgrimage by Lord Byron, with whom Scott later became friendly while visiting London. 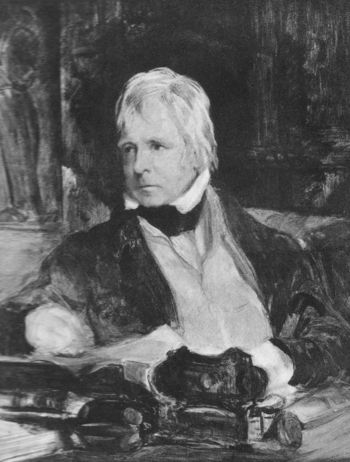 Scott had started a historical novel, Waverley, in 1805, but laid it aside. He resumed it in 1813 and it appeared anonymously, and successfully, in 1814. Most subsequent works were said to be by the Author of Waverley, and were known as the Waverley novels. These were also very successful. The second novel, Guy Mannering, followed immediately, and, Scott being driven on by financial problems in the Ballantyne printing business, The Antiquary came straight after that. The first nine novels, and many thereafter, relate to Scottish history, but from 1819 when Ivanhoe appeared, he started to introduce themes from English history and occasionally from continental history and the crusades.[3] In 1812, with an increase in his income from the legal work, he bought a farmhouse called Cartley Hole, renamed it Abbotsford, and started developing it and acquiring land around it. Old Mortality came out in 1816. From 1817 to 1819 he suffered a period of illness and pain, though in these years he succeeded in producing such well known works as Rob Roy and The Heart of Midlothian, in addition to others. In 1820 he was made a baronet, and in 1822 virtually organised King George IV's visit to Scotland, considered very successful.

Scott's literary achievements had produced a considerable income for him, but he had been generous in spending it, and had also increased his commitments in land purchasing, confident of his ability to earn. In 1826 he was involved in the financial collapse of the publishing and printing firms in which he was a sleeping partner, and came to an agreement with creditors rather than be made bankrupt, an agreement for them to receive the future income from most of his writing. This catastrophe was followed by the death of his wife. In 1827 he acknowledged the authorship of the Waverley novels, which had become manifest by the terms of his agreement with his creditors. The same year saw the publication of his Life of Napoleon Buonaparte in nine volumes, which sold as well as his novels. In 1830 he had the first of a series of strokes, and his health deteriorated, but he continued to write novels, and brought out a new edition of existing ones, with introductions and notes. To add to his troubles, his popularity in the Borders, hitherto great, was badly damaged by his opposition to the first Reform Act, and on one occasion his carriage was actually stoned. He died in 1832, having cut short a tour of Mediterranean countries, in order to die at home at Abbotsford.

Relations with other writers

Scott's literary prominence brought him into contact with other writers, not only in Edinburgh, but throughout the United Kingdom. He had strong links with the group associated with Blackwood's Magazine, but did not approve of its aggressive and controversial character. Among that group, he had ambivalent relationships with James Hogg: he discouraged Hogg's writing of poetry, and his biographer and son-in-law, Lockhart, considered Hogg deeply disrespectful towards him, but Hogg himself claimed that he was on good relations with Scott, despite the occasional disagreement. Scott corresponded with and entertained William Wordsworth, whom he appreciated, and he met Coleridge who "bethumped" him with words. He met and had good relationships with Byron, who had taken over his role as the best-selling romantic poet. He also entertained Maria Edgeworth.

Walter Scott was an avowed Tory, but with many friends of different political persuasions. He had large sympathies, and took time and trouble with people who made appeals to him, but, as James Hogg and others remarked, he had an undue sense of rank. Consequently, one person to whom he was distinctly ungenerous, was the publisher Constable, an "upstart" who treated him as an equal. Maria Edgeworth remarked of him: "Dean Swift said that he had written his books in order that people might learn to treat him as a great lord. Sir Walter Scott writes his that he may be able to treat his people as a great lord ought to do.[4] In writing those books he was intensely self-disciplined, along much the same lines as Anthony Trollope, though he does not seem to have given himself a daily quota of pages.

Scott's first novel, Waverley, set the pattern for several later ones: the hero, a gallant young gentleman, is thrown by circumstance into a difficult, dramatic and picturesque situation, where he encounters driven or idiosyncratic characters, survives various dangers, and emerges at the end happily married. The hero and other upper class characters tend to speak high-flown and stilted language, but the language of many others is vivid and idiomatic. The second novel, Guy Mannering, had some variations on this formula, and the third one, The Antiquary, broke away from it completely (apart from the conventions about language), but Scott returned to it with Old Mortality and some of the later novels.

All Scott's novels except one inferior one (St Ronan's Well) were historical novels, the first nine being set in Scotland. With Ivanhoe he made his first venture into a purely English setting, and in later tales he took his Scottish or English heroes into events from Continental history. With the exception of Ivanhoe, his works dealing with Scots and Scotland have generally been thought the more successful.

Even the few tragic novels have their humorous elements. The novels contain some of Scott's best poetry, either as lyrics or as chapter headings.

Scott wrote of himself that "if there be anything good about my poetry or my prose either, it is a hurried frankness of composition." Coleridge saw his verse as derivative, plagiarising the work of others, a reasonable assessment, though it is arguable that he gave his borrowings a different energy from that of the originals. His prose style was criticised by Robert Louis Stevenson as an ungrammatical and undramatic rigmarole of words, but John Buchan thought him a master of easy, swift, lucid narrative and particularly praised the speech of his Scots characters, both in humour and in moments of high drama. As for the characters themselves, the heroes and heroines are generally agreed to be mostly nonentities, doing the right or the rash deed as the plot requires. Others are much more lively, revealing themselves (as in the Icelandic sagas) by what they say or do rather than through elaborate authorial description.

Scott's depiction of the French king Louis XI has been criticised as a gross misrepresentation, though this is mainly for the assertions in the introduction written for the collected edition of his works. His writings generally lack strict historical accuracy.

According to C. S. Lewis, Scott was the first writer to depict the past as really different from the present. He was very popular in Britain and revolutionised the English view of Scotland; but his influence was possibly greater in continental Europe, particularly France, where his Quentin Durward sold well. He had a clear influence on Dumas, Mérimée and even Hugo. The romantic vein which he popularised is even claimed as a source of Catalan nationalism.[5] Mark Twain considered his influence pernicious.[6]

As a collector of oral ballads, Scott set a trend for getting as near as possible to original sources.