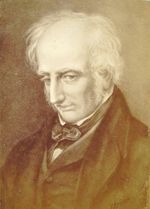 William Wordsworth (April 7, 1770 – April 23, 1850) was one of the leading English Romantic poets. He was very prolific, producing many poems that are held to be important, as well as having a significant influence on British and American poetry of the 19th and early 20th centuries. His long autobiographical poem The Prelude is widely regarded as a masterpiece, but much of his later work is generally considered less significant, especially those works composed during his tenure as poet laureate, from 1843 until his death.

In 1798, he and Samuel Taylor Coleridge published Lyrical Ballads, a work that was regarded at the time as radically innovative, with its use of a poetic register (principally seen in many of the poems Wordsworth contributed to this volume) that was closer to everyday speech, and which avoided the poetic diction that was generally the style of poetry in the 18th century.

Wordsworth was born in 1770 in Cockermouth, Cumberland, the third son of an attorney, John Wordsworth. His mother died when he was eight, and his father when he was thirteen. The children then came under the care of uncles. Wordsworth attended Hawkshead Grammar School. His first publication came when he was seventeen, a poem in The European Magazine. From 1787 to 1791 he studied at St John's College, Cambridge, where he was awarded a BA. In 1790 he spent the summer vacation on a walking tour in France and Switzerland, and during this tour he witnessed the first stages of the French Revolution.[1]

After leaving Cambridge he went to Blois in France, where he had an affair with Annette Vallon, who bore him a child called Ann Caroline. In 1793, following England's declaration of war against France, he returned to England and for the first time published some poems. At this stage of his life he was a strong supporter of revolutionary ideas and of social justice. In 1793 he undertook another walking tour, this time in England, from Salisbury to North Wales, and en route saw Tintern Abbey for the first time. He was dismayed by the Terror in France, and renewed his hopes when Robespierre was guillotined in 1794. He retained his sympathies with the hopes of many of the French revolutionaries until the French occupied Switzerland in 1798.[2]

He was short of money for much of his early life, but in 1795 received a bequest of £900 which enabled him to concentrate on a career as a poet and to create a home with his sister, Dorothy Wordsworth, to whom he was always very close. They lived first in Dorset and then in Somerset, near Samuel Taylor Coleridge. Their friendship rapidly developed. Dorothy's personal journals, with their detailed descriptions of walks in the countryside, were a major influence on both poets, but particularly on Wordsworth, whose poetry often "sampled" phrases describing nature from his sister's journals. In 1798 the two poets published Lyrical Ballads, of which Wordsworth wrote the greater part. The final poem, Lines written a few miles above Tintern Abbey, was written just before publication, after a brief walking tour. In the autumn of that year, Wordsworth, his sister and Coleridge travelled to Germany, where Wordsworth began the poem later called The Prelude.[3] In 1799 William and Dorothy settled at Dove Cottage, Grasmere, in the Lake District of north-west England. For the rest of his life, apart from a brief period at Coleorton in Leicestershire, he lived at various locations in the Lake District. By 1800, Lyrical Ballads had completely sold out, and Wordsworth, taking complete control of it from Coleridge, brought out a second edition, with many more poems and a Preface (see below under Poetic Aesthetic).

In 1802 the Peace of Amiens enabled William and Dorothy to visit Annette Vallon and his daughter in Calais. After his return, he married Mary Hutchinson, a childhood friend, who agreed to Dorothy living with them. Mary bore him five children: John (1803), Dora (1804), Thomas (1806), Catharine (1808), and William (1810). There followed a long period of relative stability and happiness, despite the death of his brother John, a sailor, in 1805. Among the friends he made during this period was Walter Scott, whom he met in 1803 on a carriage tour of Scotland, and who introduced him to his best patron, Sir George Beaumont.[4]

In 1810 Wordsworth had a major quarrel with Coleridge, and although they soon made peace with each other, the relationship between them was never quite as close as before.

To add to the tragic loss of his brother, he and his family were shaken by the death of two of the children, Catharine and Thomas, in 1812. The effect of Catharine's death in particular is revealed by the sonnet, "Surprised by Joy, impatient as the wind/I turned to share the transport — Oh! with whom/But Thee, deep buried in the silent tomb . . ."[5]

Coleridge had expected Wordsworth to write "a great philosophical poem", and Wordsworth had worked on this over a period of time. The first part, The Excursion, was published in 1814, to devastating reviews, and Coleridge was intensely disappointed with it. The project was abandoned.[6]

Always an inveterate walker, Wordsworth made a number of further walking tours, including of Scotland and (in 1828, with his daughter Dora and Coleridge) of the Rhineland.

Wordsworth's political sympathies changed following the rise of Napoleon, and he became a Tory. In the last years of his life he was very much a member of the conservative political establishment. In 1813 he obtained a government post: Distributor of Stamps for Westmorland, expecting £400 p.a. from it but in practice getting less. This enabled Wordsworth and his household to move, in that year, to Rydal Mount, again in the Lake District. He was able to pass the post on to his son William in 1842.[7]

Later in his life other public recognition followed - honorary degrees from the universities of Durham in 1838 and Oxford in 1839, and a government pension of £300 a year from 1842. In 1843 he became poet laureate following the death of Robert Southey. He died at Rydal Mount on 27 April 1850 and was buried in the churchyard of St Oswald's Church, Grasmere.

The critical reception of his poetry was initially, at best, mixed. The intentions behind the Lyrical Ballads were widely misunderstood, and some of his work was soon parodied. His Poems in two volumes (1807) was savagely attacked in the influential Edinburgh Review. Lord Byron was among those out of sympathy with his style: in English Bards and Scots Reviewers he describes Wordsworth as showing that "prose is verse, and verse is merely prose", and calls him a "dull disciple" of Southey. But acceptance followed, and Wordsworth and Coleridge had a major influence on the following generation of English poets. John Keats revered him as a poet, but was shocked by his Tory sympathies. In his later years, Wordsworth was very much a grand old man of English letters. Despite the widespread view that he is one of the major English poets, on a par with Chaucer, Spenser and Milton, Wordsworth has never had a European reputation, though Matthew Arnold, a critic with a European perspective, compared him with Goethe, implying that he had a rarer genius.

The initial critical hostility to Lyrical Ballads (all but four of the poems in the volume being by him) led Wordsworth to include a Preface in subsequent editions to act as an apologia for his poetic aims. He explained in the Preface that he sought to use vernacular language and to write about simple uneducated country people as that, to him, was a more "poetic" and "truthful" language than the more formal poetic diction of his day, which he thought artificial and insufficient to "celebrate" the beauty of the natural world. He also said:

"The majority of the following poems are to be considered as experiments. They were written chiefly with a view to ascertain how far the language of conversation in the middle and lower classes of society is adapted to the purpose of poetic pleasure."

The Preface also contains his now famous definition of poetry as being "the spontaneous overflow of powerful feelings from emotion recollected in tranquility".

It is generally accepted that Wordsworth wrote most of his best poetry when young, when he was more audacious. In the Lyrical Ballads the high achievement of Tintern Abbey is preceded by the bathos of The Thorn, which contains his two most notorious lines: "I’ve measured it from side to side,/‘Tis three feet long and two feet wide." Thereafter the strength of determination declined. The Prelude, his masterpiece, he was never brave enough to publish in his lifetime. There are some exceptions to this generalisation. The Extemporary Effusion on the Death of James Hogg, for example, is a very moving poem of his old age, and some of the later amendments to The Prelude are strikingly beautiful.

In his concentration on nature, Wordsworth built upon trends that had already started to emerge in late 18th century English poetry (most notably in the poems of Thomas Gray and Mark Akenside), though his style was very different. The love of nature at its most sublime, of mountains and of wild scenery (which was also evident in the paintings of his time) was in sharp contrast to the view that nature only after it had been manipulated by human hands, such as in landscape gardening, could then be considered a suitable subject for art and poetry.

Although Wordsworth's early works came to be highly admired and were influential to many poets, his later work is considered by many to be less notable. What has been termed his last great poem the Extempore Effusion upon the death of James Hogg was written in 1835.[8] At his best he could produce both successful longer poems and appealing lyrical poetry. Among his most famous poems are: