I started this article because it was high on the list of most wanted articles, not because I feel especially proficient in this subject. I would like to ask for support on the biological and medical uses of oxygen, and also in making the article more attractive visually. Thanks. --Paul Wormer 04:24, 15 September 2007 (CDT)

See: Template:Elem_Infobox for a simple chemical infobox. Let me know if there's anything I should add to the template. --Robert W King 10:37, 15 September 2007 (CDT)

I'm not quite sure that this template clarifies a lot in the case of oxygen. Or maybe I do something wrong?--Paul Wormer 09:12, 16 September 2007 (CDT)

No, it doesn't clarify a lot--it's just an infobox, nothing more. I can always add more fields to it but so far no one's ever provided any feedback on what exactly it should describe. --Robert W King 16:27, 16 September 2007 (CDT)

Robert and I are discussing putting nuclear info, like radio-active isotopes, nuclear spin, etc in the chem info box. I was thinkng that an alternative idea would be to make an isotope_infobox, where for each isotope we list atomic mass, nuclear spin, gyromagnetic ratio or relative sensitivity (vs. 1H) or nuclear ground state. Paul, do have any thoughts on this?

the general idea however should be: info is good, too much info distracts and I wonder if it provides real info to somebody 'passing-by' on the page. Sure it seems more complete that way. I will upload an example from collected info using CRC's handbook. 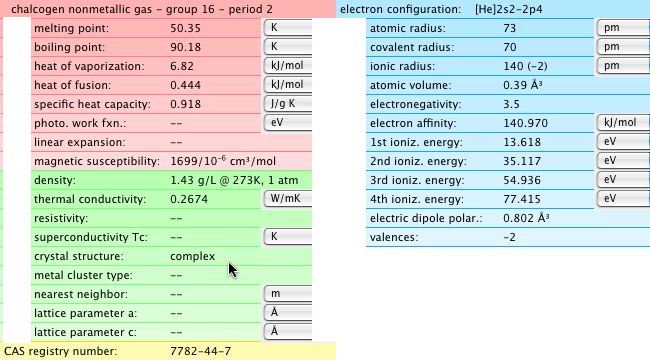 The stuff in the left boxes appear to be molecular properties of the O2 gas, so we are looking at the right box only? I would suggest that things like atomic radii and electronegativy won't change much by isotope (i would need to check that supposition), but nuclear spin and radioactivity change alot for isotopes, with spin states of +/-1/2 up to +/-7/2 generally, and either radioactive or not. This fact is frequently exploited with nuclear labelling in medicine (radiology, NMR, MRI) and might be of some curiosity to the person being injected with labeled isotopes before procedures.

I think that should make more impact when talking about isotopes than putting it into some figure that gets overcrowded with info. Robert Tito |  Talk  14:29, 18 October 2007 (CDT)

Then should we remove the present list of isotopes? It only lists four of the nine oxygen isotopes ( Oxygen-13 to Oxygen-20) that are known (CRC, 1989)and is therefore somewhat misleading. Should we make a page entitled "Isotopes of (Element Name)" that would include mass, spin, decay route, half-life, magnetic momentum, decay energies? Should we ignore the complicated for now and stick with writing pages for all of the elements first? David E. Volk 14:42, 18 October 2007 (CDT)

how about a short summary on the main page with a link to a subpage? Try imagine all isotopes for U or Pt you could write a volume on these. Robert Tito |  Talk  14:49, 18 October 2007 (CDT)

This started with my thinking that radioactive isotopes, if naturally occuring, should be shown somewhat prominently in the chem infobox. Perhaps we should still do that, if even with only a "natural isotopes='yes'" indication in the chem infobox that doesn't necessary list them individually. Since the amound of data can be staggering, separate "isotopes of X" pages seems to be the way to go, with brief mention of only of the naturally occuring dangerous isotopes and some mention of the often used ones for medical/research purposes. So, for Robert's chem infobox, let's put in a slot under hazards called radioactive isotopes, to which the answers could be yes, no, or a short list. Everyone agree with that? David E. Volk 15:03, 18 October 2007 (CDT)

ok by my standards - just the standard isotopes and on a special isotope page all of these guys - it would make things more systematical and more identical to implement it's easy for natural U, 235/238 or O 12,13,14,16 being the normal natural isotopes but any exotics created in some lab, particle accelerator or other way would take volume after volume of info. I wonder who is interested knowing that isotope X of element Y with a half time life of less than 1 femto second exists. It for sure wouldn't top my list of wow info Robert Tito |  Talk  15:29, 18 October 2007 (CDT)

You are correct. But then again, I don't care about a particular sub-species of the ring-necked what-you-call-it-bird only living in Peru. But someone does. David E. Volk 15:32, 18 October 2007 (CDT)

I would suggest naming the natural occurring isotopes in the info-box and linking to the Template:Isotope-subpage to fill in any details but then we more or less are obliged to add info like energy levels, exitation state energies, compton info and a page of zillion naming all known substances containing element/isotope X. Whatshammecallthat? chaos. It seems way over our aim :)))) A link to CRC would suffice then I would suggest - saves us the work of re-typing general accessible info. Robert Tito |  Talk  15:58, 18 October 2007 (CDT)

None of the radioactive isotopes of oxygen are naturally occurring.

Thanks Robert, I think the main thing is: no cluttering of info - too much is simply too much. I will ask Chris Day if adding an optional (to be named) subpage is possible in the subpage template. BTW: standard info is electronegativity added to the colored box as part of the atomic info. Robert Tito |  Talk  16:19, 18 October 2007 (CDT)

Another option, rather than an isotopes subpage, is to go with a catlog for the isotopes. However, I can see why the isotopes subpage is preferable sine it is obvious from the main page where to finds the information. A catalogs tab is a bit cryptic. Chris Day (talk) 19:35, 18 October 2007 (CDT)

Would it be generic you can have something like periodic table/elements/isotopes, or country/cities/travel guide and what other fancies you got. Robert Tito |  Talk  19:46, 18 October 2007 (CDT)

Certainly that is an option too. i think we might want to avoid subsubpages where possible though. For example I expect cities to have their own articles as well as elements. Chris Day (talk) 20:16, 18 October 2007 (CDT)

Given now that this is a subpage of it's own, what change would you prefer to have me make on the infobox?

Not so much a change, but preventing you to have to go through a tedious and nasty thing. I would suggest the scheme used in the Periodic Table of Elements that contains all standard info and it would make things consistent. Maybe a possible addition of the major natural isotopes to the boxes used in the PT of E. Robert Tito |  Talk

The problem I see with directly reflecting that table is when it comes to creating the template, it will get relatively complex (possibly to the point of overbearing) because there is no "key" on the template that indicates what-is-what. Essentially, what is the most important information that you think should be included on the template and I will make it happen. (Also, size of the template is also a constraint; I don't want it to take up 1/3rd of the overall article width) --Robert W King 20:06, 18 October 2007 (CDT)

Mass, atomic number, electron config, electro negativity, 2 or 3 isotopes or none if appropriate and possible electric valences. More seems not interesting for now. I can't think of anything else that is a must have. Robert Tito |  Talk  20:26, 18 October 2007 (CDT)

When writing the article, I considered adding all isotopes from

The isotopes subpages can be added to all elements. If we can fill in the isotopes there the article seems ready to go up for approval. Robert Tito |  Talk  14:54, 19 October 2007 (CDT)

The reason the sentence was akward was that I wanted to make clear that it was volume percentage, not mass percentage that I was quoting. Now, this difference has disappeared. David, do something about it, please.--Paul Wormer 01:56, 20 October 2007 (CDT)

We need to fill in the oxidation states