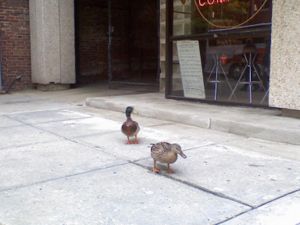 Robert - Introduced to England by the Normans, Robert is derived from the Old High German Hruodperht, a compound name composed of the elements hruod (fame) and perht (bright). The name was borne by Robert I (d. 1035), Duke of Normandy and father of William the Conqueror, and by three kings of Scotland.

William - From the Old Norman French Willaume which is from the Old High German Willehelm (Resolute protector). The name is composed of the elements willeo (will, determination) and helm (helmet, protection).

I am 31 year old human being living somewhere in Norfolk, VA. I hold an Associate's in Information Technology from NVCC and am working on my B.S. in Mechanical Engineering from Old Dominion University. My interests are varied these days.

My background is in Network Security, Programming, and Technical Support; all things tech. I have worked for the US Navy, the Army, and other institutions. A number of my projects have included data organization, automation, and collection. Lately I have taken a strong interest in global politics and monetary policy, and in making things(fabrication). I have a great desire to acheive something great for mankind.

In the past I have contributed to U.S. Government articles within Wikipedia, and reported on the Wired-sponsored Assignment Zero.

I have written three blog posts on NewAssignment.Net

Books I have read or am currently reading:

I performed levels of relentless editing on these articles:

I created the following images:

There are three properties that I believe should be adhered to in the context of this project when it comes to non-philosophical topics: fact, relevancy, and neutrality.

It is the reponsibility for everyone who wishes to further the knowledge and education of the masses to provide the basis for others to make their own decisions. One should be "informative" and not "convincing" when it comes to the essential elements of knowledge.