Technetium is a chemical element, having the chemical symbol Tc. Its atomic number (the number of protons) is 43. It has a standard atomic weight of 98.9062 g•mol −1 and is a solid in its elemental form.

All the isotopes of technetium are radioactive; 98 is the atomic mass of technetium's longest-lived isotope, 98Tc (4.12x106 years).[2] Technetium has the lowest atomic number of the chemical elements that lack a stable isotope.

Only very small amounts of technetium are found in nature.[3] Practically all technetium is produced synthetically as a by-product of the fission of uranium-235 in nuclear reactors and it is extracted from the spent reactor fuel rods.[4]

Technetium has many important medical applications:

Or consider the element technetium, which has a far lower atomic number of 43 but which was first discovered in Palermo, Sicily in 1937 after being artificially created in a cyclotron machine in Berkeley, California. Over the subsequent years technetium has found its way into every major hospital in the world and is used in a plethora of medical scanning procedures as well as for treating various medical conditions. It was later found that technetium occurs naturally on earth but in absolutely minute amounts. This happens because technetium is a bi-product of the natural decay of uranium and also because it is a bi-product in the operation of nuclear reactors. The second of these sources provides macroscopic amounts of technetium, which allow scientists to study the chemistry of the element in great detail and to make many new and medically useful compounds. There have been entire conferences devoted to the chemistry and uses of technetium.[5] 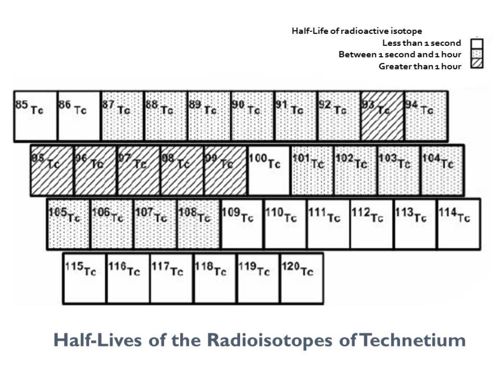 To find the numerical value of the half-life of any isotope of technetium, see:[6] [7]