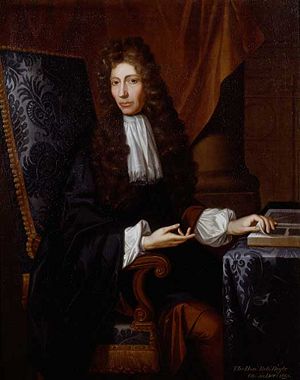 Robert Boyle (Lismore Castle, Waterford County, Ireland, January 25, 1627 – London, December 30, 1691) was a British chemist and physicist, mainly known for Boyle's law (1662) that states that the pressure of a fixed amount of gas at constant temperature is inversely proportional to its volume. The experimental work that lead to this law was by means of an air pump invented in 1650 by Otto von Guericke, the Burgomaster of Magdeburg. The pump was greatly improved by Boyle in corporation with his assistant Robert Hooke.

Boyle propagated the idea that a chemical compound consists of small particles, which he called "corpuscles". He was one of the first to prepare phosphorus (see phosphorus for more details about the discovery of the element) and the first to describe hydrogen gas. Although he was probably the first chemist in the modern sense of the word, he still believed, as the alchemists did, that transmutation of individual chemical elements was possible.

Boyle's main contributions to chemistry are the following: (1) he realized that chemistry is worthy of study for its own sake, and not merely an aid to medicine and alchemy (although he did not reject the latter); (2) he introduced rigorous experimental methods into chemistry; (3) he gave a clear definition of a chemical element and showed by experiment that the four elements of Aristotle (earth, air, fire, and water) and the three principles of Paracelsus (mercury, sulfur, and salt) did not deserve to be called elements or principles at all, since none of them could be extracted from bodies, for instance, from metals.

Boyle recognized chemistry as contributing scientific knowledge that helped to understand nature — the focus of natural philosophers. He wanted to show that chemistry counted as science, proper to natural philosophy. He contrasted chemistry science with the chemistry practiced by artisans, apothecaries for example, and alchemists, who sought no underlying meaning or only meaning based on elements and principles meriting skepticism based on flaws in reasoning and interpretation of experiments. He envisioned chemistry science as natural philosophy, and as a key to understand how nature operates, at the level of its simplest structures and mechanisms, the parts and their interactions.

Boyle saw the world as a great automaton, his own words. He advocated a corpuscular view of nature and a philosophy based on Descartes' application of a mathematical and experimental approach to chemistry and on Bacon's advocacy of inquiring about matter physically not metaphysically, as well as on Bacon's inductive approach—amass the facts first before fixing on one hypothesis. He viewed himself as doing the latter through rigorous experiment and nomenclature reform, although he did not resist the lure of drawing generalizations and advocating principles of nature, structure and operational mechanism. He remained passionate but not dogmatic. He thought that discovering the underlying structure and mechanism of the world would hardly explain the working of a much larger contrivance in existence created by his Deity, the Christian God. His science, however, betrayed no evidence of religious bias, and, understanding experimental proof as context-dependent and dynamic, he asserted himself to alter his interpretations if better ones came to fore with advancement of science.

Boyle was one of the founders of the Royal Society of London, chartered in 1662. He was a very religious Anglican who wrote extensively about the reconciliation of theology and natural philosophy (science).

Robert's father, Richard Boyle, is remembered as the "Great Earl of Cork". Richard Boyle, who was not from rich background, had gone to Ireland in 1588 to seek his fortune. This was the time that England was colonizing all of Ireland, resulting in the complete conquest of Ireland by 1603. In a few years, Robert's father had risen to "Sir Richard Boyle, Knight, Lord Boyle, Baron of Youghall, Lord Dungarvan, Earl of Cork, Lord High Treasurer of Ireland". He managed this partly by good marriages, first (1595) to a rich widow, and second (1603) to the 17-year old Catherine Fenton, Robert's mother, daughter of the Secretary of State for Ireland, and by making influential friends in Court. At the time of Robert's birth his father's means amounted to two hundred and fifty pounds a day exclusive of houses and parks and it was said that he was the richest man of England. 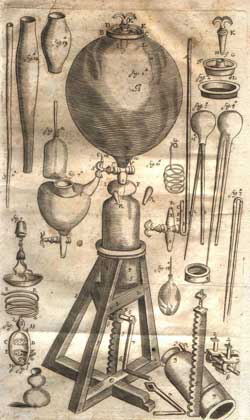 PD
This is a seventeenth-century engraving of Boyle's famous air-pump or vacuum chamber, designed for him by Robert Hooke (1635-1703). The experiments carried out using this apparatus were reported in Boyle's first scientific book, published in 1660

Robert Boyle was born as his parents' fourteenth child and seventh son, the last to survive to adulthood. His mother died in childbirth a few weeks after Robert's third birthday.

Robert Boyle was a competent linguist from an early age, and was reputed to be fluent in French and Latin at the age of eight. As a young boy of nine he went to Eton, together with his brother Francis. After three years at Eton, the Boyle brothers engaged a French tutor, Isaac Marcombes, and traveled for a few years years on the European continent with him, visiting France, Switzerland, and Italy.

When visiting Geneva during his grand tour, the fourteen year old Boyle underwent what he clearly felt to be a conversion from nominal, or at least unthinking, Christianity to committed Christianity and he promised himself then that he would live a pious Christian life. Later he wrote Christian devotional and ethical essays and theological tracts on biblical language, the limits of reason, and the role of the natural philosopher as a Christian. He sponsored many religious missions, as well as the translation of the Scriptures into several languages. Throughout his life, he spread large parts of his income widely in charitable donations and he left most of his property to charity after his death.

During their tour of Europe, the brothers were in Florence when Galileo Galilei died. The huge public attention that this event drew roused Robert's curiosity and he began reading widely about Galileo and his work; this seems to have been a key event in developing the young man's interest in science. A few months later, when the boys were back in Geneva, Francis was called home because of the Irish rebellion that started November 1641 and that put great strain on the finances of the "Great Earl of Cork". Much of Boyle senior's possessions were in Ireland and he had to pay large mercenary forces to keep the Irish rebels in hand. Earlier he had paid his sons a thousand pounds a year and now had difficulty to pay 250 pounds for the return of Francis to England—money that did not reach Francis but was embezzled on the way. Robert, staying behind with Marcombes in Geneva and pursuing further studies, had to make ends meet.

Robert and his tutor went back to England in 1644, arriving after his father, the "Great Earl", had died. He took up residence at his hereditary estate of Stalbridge in Dorset. Here he began, as a 17-year-old, a literary career writing ethical and devotional tracts, some of which employed stylistic and rhetorical models drawn from French popular literature, especially romance writings. Some of this work is remembered only because Jonathan Swift wrote a spoof on it: Meditations Upon a Broomstick (According to the style and manner of the Hon. Robert Boyle's meditations).[1] Apart from writing religious tracts, the young Boyle performed experiments on the side, mainly of the alchemist kind.

During England's civil war (1642–46), Robert's sister Katherine—Lady Ranelagh, the wife of Viscount Ranelagh—helped him in keeping out of political trouble. Although the Boyles had been Royalists, Katherine was a Parliamentary sympathizer and had influential Parliamentary friends. Katherine's house in London was a meeting place for many of the intellectuals of the day, including a group of men interested in science, who called themselves the "invisible college", and who began meeting in the mid-1640s to discuss the ideas of Francis Bacon. Through Katherine, Boyle became part of this band of inquirers, who devoted themselves to the cultivation of the "new philosophy." They met frequently in London, not only at Katherine's house but also at Gresham College, while some of the members also had meetings at Oxford. In this period of Boyle's life an important influence was George Starkey, an emigré from New England. Boyle acquired from Starkey a full experimental knowledge of Helmontian "chymistry", a discipline that combined mundane chemical pursuits with the alchemist search for alkahest and the philosophers' stone. 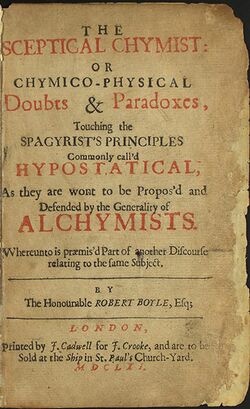 In 1652, after Oliver Cromwell had quelled the last unrest in Ireland, Boyle went there accompanied by his friend, the physician William Petty. The Irish situation had improved for the Boyle family and also for the finances of Robert, who received for life an income from his Irish estates of more than £ 3000 per annum. During his Irish trip Robert learned anatomy and physiology from his physician friend.

After he had become rich again, Boyle moved in 1654 to the University town Oxford in order to be closer to his friends of the "invisible college" and to London. When twelve members met on 28 November 1660 at Gresham College after a lecture by Christopher Wren, they decided to found "a Colledge for the Promoting of Physico-Mathematicall Experimentall Learning". The group included Wren himself and also Robert Boyle. A few years later the "Colledge" became the Royal Society of London. In 1680 Boyle refused the presidency of the Royal Society because the inauguration oath violated his strongly held religious principles.

Before or around the time of his moving to Oxford, Boyle became a corpuscularian thinker, committed to the idea that matter is composed of discrete particles rather than being an infinitely divisible continuum. Already in his work Of the Atomicall Philosophy (c. 1654–1655), Boyle tried to found his corpuscular doctrine on laboratory observations.

Reading of Otto von Guericke's air-pump in 1657, he set himself with the assistance of Robert Hooke to a series of experiments on the properties of air. An account of this was published in 1660 under the title New Experiments Physico-Mechanical, Touching the Spring of the Air and its Effects. While answering some critics, Boyle enunciated in 1662 the law, now generally known as Boyle's law, although the law is sometimes attributed to Edme Mariotte, who published it in 1676.

In 1661 Boyle published his most influential book about chemistry: The Sceptical Chymist, in which he criticized the experiments of the Spagyrists, followers of the tria prima theory of Paracelsus, who posited that salt, sulfur, and mercury are the three prime chemical elements ("principles").

In 1668 Robert Boyle moved in with his sister Katherine, who lived on Pall Mall, London. There he set up an active laboratory, employed assistants, received visitors, and published at least one book nearly every year. Living in London also provided him the opportunity to participate actively in the Royal Society.

In the 1680s his health deteriorated but he stayed productive; he published a number of medical works, including his Memoirs for the Natural History of Human Blood (1684), and his Medicina Hydrostatica (1690); these drew to a significant extent on work that he had done earlier, some of it while still at Oxford. Equally important were Boyle's publications in the last two decades of his life on philosophical and theological topics. For instance, in 1686 appeared the important Free Enquiry into the Vulgarly Receiv'd Notion of Nature. This was one of a number of works published in the final decade of his life in which Boyle presented his reflections on theological and philosophical issues. In these works, Boyle analyzed the relationship between God and the natural world, and man's potential for comprehending this.

In December 1691 he died, one week after the death of his sister with whom he had lived the last twenty years of his life.