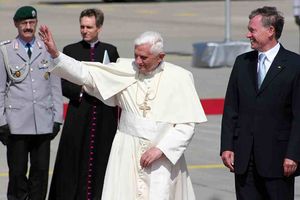 Before becoming Pope, Ratzinger had been an academic theologian, and was later Prefect of the Congregation for the Doctrine of the Faith.

As Pope, he was theologically conservative and traditionalist. He authored three Papal encyclicals: Deus Caritas Est ("God Is Love", a 2005 treatise on Christian love), Spe Salvi ("In Hope We Are Saved"; in 2007, on Christian hope) and Caritas in Veritate ("Charity in Truth"; in 2009, "On Integral Human Development in Charity and Truth").

He resigned on 28 February 2013, having said advancing age had deprived him of strength to carry on; he retained his title as emeritus.