The flag of Angola.

Angola, formerly the People's Republic of Angola and officially the Republic of Angola (Portuguese: República de Angola; IPA: [ʁɛ'publikɐ dɨ ɐ̃'gɔlɐ]), is a country in southern Africa. It was a Portuguese colony from 1575 until it gained its independence in 1975, and is the largest Portuguese-speaking state in Africa. After its separation from Portugal, it underwent a bloody civil war, which lasted until 2002. It is a member of the African Union. Its capital and largest city is Luanda, formerly known as Loanda. It uses West Africa Time. Its government is a republic and has a multi-party presidential regime.[1]

The earliest inhabitants of Angola were Khoisan hunters and gatherers. They were later replaced by Bantu migratory tribes. [2] In the late 15th century, the Portuguese arrived to the coasts of Angola, and, after a short Dutch occupation, gained control of the country until the late 20th century. Portugal did not acquire precious metals from Angola, as with its other colonies. Instead, Angola became one of Portugal's main source for slaves. Portugal officially established its first base in Angola in 1575. [3]

Angola's military is composed by the Angolan Armed Forces. It is divided in three branches: the Army, the Navy (Marinha de Guerra), and the Angolan National Air Force, formerly known as the People's Air and Air Defence Force of Angola (Força Aérea Popular de Angola/Defesa Aérea e Antiaérea). Military service in Angola is compulsory. Conscripts must be at least 18 years old and must serve for two years, plus training time. [1] As of 2002, the army has a total manpower of 90,000 people, the navy has 4,000 personnel, and the air force has 6,000. [4] The Angolan Armed Forces are headed by a Chief of Staff, who reports directly to the Angolan Minister of Defense. [5]

(PD) Photo: USAID Guinea
A diamond miner.
Each province is subdivided into municipalities or municípios, also translated as "city councils". There are 163 total city councils in Angola.[7]

The currency used in Angola is the Angolan kwanza. Due to warfare, Angola's economy is weak. The production of petroleum is one of its most productive industries, as it accounts for over 90% of the country's exports. The other is the production of diamonds. Angola is the fourth-largest diamond producer in the world, producing around 739 million USD in 2000. [8] 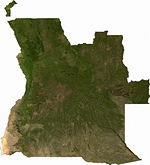 Angola has a total area of 481,354 mi² (1,246,700 km²). It is the 23rd largest country in the world [9] and the seventh largest in the continent. [10] The country is bordered by Namibia, Zambia, the Democratic Republic of the Congo, and the South Atlantic Ocean. It is divided into 18 provinces, with the Angolan exclave of Cabinda which borders the Republic of the Congo to the north separated from the other 17 by the River Congo delta.[11]

Angola's climate varies from location to location. On the country's north and eastern regions, the climate is tropical. In the south, dessert conditions prevail. There are two major seasons during the year. These are a dry season, a cool season from June to late September, and a rainy, hot season from October to April or May. The average temperature is 68°F, but is warmer along the coast and cooler on the country's center. [12]

This section will include information on Angolan literature, way of life, traditional food, and Angolan music and dance. [20]