Pollination is an important step in the reproduction of seed plants: the transfer of pollen grains (male gametes) to the plant carpel, the structure that contains the ovule (female gamete). The receptive part of the carpel is called a stigma in the flowers of angiosperms and a micropyle in gymnosperms. The study of pollination brings together many disciplines, such as botany, horticulture, entomology, and ecology. Pollination is important in horticulture because most plant fruits will not develop if the ovules are not fertilized. The pollination process as interaction between flower and vector was first addressed in the 18th century by Christian Konrad Sprengel. 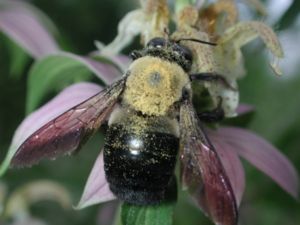 About 80% of all plant pollination is biotic. Of the 20% of abiotically pollinated species, 98% is by wind and 2% by water and sun. 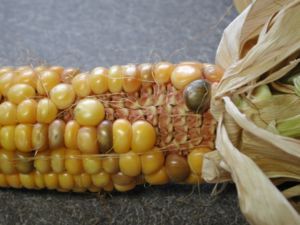 An ear of corn with a partial pollination failure. The incipient seeds were not fertilized by a gamete from a grain of pollen for some of the seeds.

Pollination management is a branch of agriculture that seeks to protect and enhance present pollinators and often involves the culture and addition of pollinators in monoculture situations, such as commercial fruit orchards. The largest managed pollination event in the world is in Californian almond orchards, where nearly half (about one million hives) of the US honey bees are trucked to the almond orchards each spring. New York's apple crop requires more than 30,000 hives; Maine's blueberry crop uses about 60,000 hives each year.

Bees are also brought to commercial plantings of cucumbers, squash, melons, strawberries, and many other crops. Honey bees are not the only managed pollinators; other species of bees are also raised as pollinators. The alfalfa leafcutter bee is an important pollinator for alfalfa seed in western United States and Canada. Bumblebees are increasingly raised and used extensively for greenhouse tomatoes and other crops.

Pollination also requires consideration of pollenizers. (The terms "pollinator" and "pollenizer" are often confused: a pollinator is the agent that moves the pollen, whether it be wind, bees, bats, moths, or birds; a pollenizer is the plant that provides the pollen.) Some plants are self-fertile or self-compatible and can pollinate themselves. But about half of all angiosperms are considered self incompatible. They have chemical or physical barriers to self-pollination and need to be cross-pollinated. With these self-infertile plants, not only pollinators must be considered but pollenizers as well. In pollination management, a good pollenizer is a plant that provides compatible, viable and plentiful pollen and blooms at the same time as the plant that is to be pollinated.

These are end points on a continuum, not absolute points.

Hybridization is effective pollination between flowers of different species of the same genus, or even between flowers of different genera (as in the case of several orchids). Peaches are considered self-fertile because a commercial crop can be produced without cross-pollination, though cross-pollination usually gives a better crop. Apples are considered self-incompatible, because a commercial crop must be cross-pollinated. Most fruits are grafted clones, genetically identical. An orchard block of apples of one variety is, in effect, all one plant. Growers now consider it a mistake to plant a solid block of a single variety. One means of correcting this mistake is to graft a limb of an appropriate pollenizer (generally a variety of crabapple) every six trees or so.

Pollination should be distinguished from fertilization which is the union of the gametes within the ovary. With multiseeded fruits, pollination is a cumulative event, not a binary action, depending, for the production of quality fruit, on the delivery of numerous grains of viable pollen, and even distribution on the stigma. The goal is sufficient pollination to maximize the number of ovules fertilized. Successful pollination depends on many variables, including the extent of self-fertility vs. self sterility (ie the distance pollen must be moved, whether within a single flower, from a male to a female flower on the same plant, or from a pollenizer at some distance, the quantity and type of pollinators (ie. pollinators adapted to the flower morphology), species faithfulness of pollinators, distance from pollenizers vs. the range of the utilized pollinators, the quantity, and viability of pollen from the pollenizers, weather (ie. too cold for pollinators to be active, or so hot that pollen will desiccate and die), etc.

Pollination of food crops has become an environmental issue, due to two trends. The trend to monoculture means that greater concentrations of pollinators are needed at bloom time than ever before, yet the area is forage poor or even deadly to bees for the rest of the season. The other trend is the decline of pollinator populations, due to pesticide misuse and overuse, new diseases and parasites of bees, clearcut logging, decline of beekeeping, suburban development, removal of hedges and other habitat from farms, and public paranoia about bees. Widespread aerial spraying for mosquitoes due to West Nile fears is causing an acceleration of the loss of pollinators.

The US solution to the pollinator shortage, so far, has been for commercial beekeepers to become pollination contractors and to migrate. Beekeepers tend to follow the bloom from south to north in spring, to provide pollination with generalist honey bees for many different crops.

It is estimated that honey bees provided $14.6 billion dollars in crop production value in the United States in the year 2000.Honey bees travel from flower to flower, collecting nectar (later converted to honey), and pollen grains. The bee collects the pollen by rubbing against the anthers. The pollen collects on the hind legs, in dense hairs referred to as a pollen basket. As the bee flies from flower to flower, some of the pollen grains are transferred onto the stigma of other flowers.

Nectar provides the energy for bee nutrition; pollen provides the protein. When bees are rearing large quantities of brood (beekeepers say hives are "building"), bees will deliberately gather pollen to meet the nutritional needs of the brood. A honey bee that is deliberately gathering pollen is up to ten times more efficient as a pollinator than one that is primarily gathering nectar and only unintentionally transferring pollen.

Good pollination management seeks to have bees in a "building" state during the bloom period of the crop, thus requiring them to gather pollen, and making them more efficient pollinators. Thus the management techniques of a beekeeper providing pollination services are different from, and somewhat incompatible with, those of a beekeeper who is trying to produce honey.

Number of hives needed per acre (4,000 m²) of crop pollination

It is estimated that about one hive per acre will sufficiently pollinate watermelons. In the 1950s when the woods were full of wild bee trees, and beehives were normally kept on most South Carolina farms, a farmer who grew ten acres (40,000 m²) of watermelons would be a large grower and probably had all the pollination needed. But today's grower may grow 200 acres (800,000 m²), and, if lucky, there might be one bee tree left within range. The only option in the current economy is to bring beehives to the field during blossom time. Source: Delaplaine et al. 1994, Bee pollination of Georgia crop plants. CES Bulletin 1106. 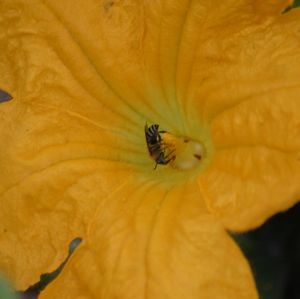 Peponapis sp. AKA "squash bee" a pollinator native to North America, significant in pollination of native squash and pumpkin crops

Other species of bees will differ in various details of their behavior and pollen-gathering habits. Honey bees are not native to the Western Hemisphere. Pollination of native plants in the Americas has been historically performed by various native bees. The ecological and financial importance of natural pollination by insects to agricultural crops, improving their quality and quantity, becomes more and more appreciated and has given rise to new financial opportunities. The vicinity of a forest or wild grasslands near agricultural crops, such as apples, almonds or coffee can improve their yield by about 20%. This may result in forest owners demanding payment for their part in the improved results. This is a simple example of the economic value of ecological services.