Beetles (Order Coleoptera) make up the largest order in the insect kingdom. Many beetles are pests, feeding on all parts of crops. Still others will eat stored food. Other beetles are helpful, eating other insect pests or acting as scavengers.

The forewings, or elytra, are leathery and hard, nearly always meeting up in a straight line down the back. They are not used in flight. The hindwings, which are used in flight, are usually tucked underneath the forewings. In most species of beetles, both pairs of wings are present. Antennae are usually 11 segments long, with some species having 8-10, and the rare occasional beetle with as few as 2.

Beetles undergo complete metamorphosis. That is, they start off as eggs, become larvae, pupate, and turn into the adult form. Larvae are variable in form and the hardness of their form. They can appear grub-like, campodeiform, worm-like, and more. Some larvae feed in the open, while others bury into their food. 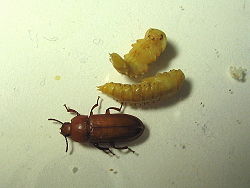 Larval forms live in a large number of habitats, and some are aquatic. The same is true for the adult form. They are common on vegetation, and are found under bark, stones, and other objects as well. They can also be found in fungi, rotting vegetation, dung and carrion.

There are four suborders in this order. Archostemata are the most primitive. In Adephaga, the first abdominal sternum are interrupted in the center by the hind coxae. In Polyphaga, the sternum extends completely across the abdomen. Superfamilies and families are usually divided by characteristics of the antennae, leg, head, pronotum, elytra, thoractic sclerites, and abdomen.