A pollinator is the biotic agent (vector) that moves pollen from the male anthers of a flower to the female stigma of a flower to accomplish fertilization or syngamy of the female gamete in the ovule of the flower by the male gamete from the pollen grain. Though the terms are sometimes confused, a pollinator is different from a pollenizer, which is a plant that is a source of pollen for the pollination process.

The most recognized pollinators are the various species of bees, which are plainly adapted to pollination. Most bee species are fuzzy and carry an electrostatic charge. Both features help pollen grains adhere to their bodies. Bees often also have a pollen carrying structure such as the corbicula of honey bees and bumblebees (also known as the pollen basket), or the scopa of the lower abdomen of megachilid bees, made up of thick, plumose setae. Honey bees gather nectar, a concentrated energy source, and pollen, which is high protein food from flowers, to nurture their young, and inadvertently transfer some among the flowers as they are working. Honey bees need a steady source of pollen to multiply.

Not all pollinators are equal. Four insect pollinators of chicory Cichorium intybus are shown in the photos on the right. Note that the two bee species are carrying high pollen loads, making them much more efficient pollinators than the two fly species that only have a few grains on their feet. Most bees have branched hairs, and carry an electrostatic charge, which caused pollen to adhere to them. 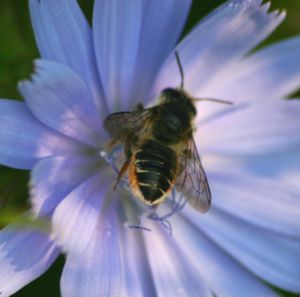 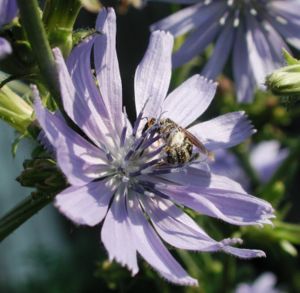 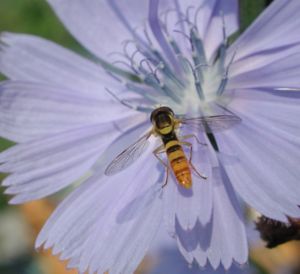 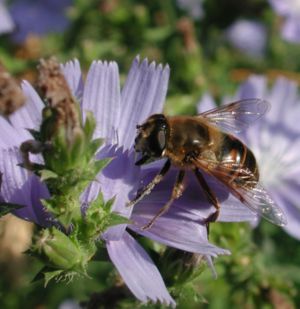 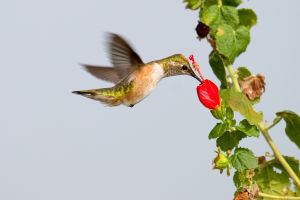 Euglossine bees pollinate orchids, but collect scents rather than nectar or pollen. 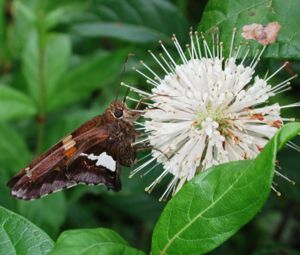 Lepidopterans are too dainty to pollinate many of the human food crops, because they can sip nectar without touching the floral sexual parts. However this Silver spotted skipper Epargyreus clarus and the native plant Button bush Cephalanthus occidentalis make a perfect pollinator pair, as the floral parts are shaped to brush against the skipper

Lepidoptera (butterflies and moths) also pollinate. They are not major pollinators of human food crops, but various moths are important for some wildflowers.

Many other insects accomplish pollination. Wasps (esp. Sphecidae and Vespidae), bombyliid flies and syrphid flies are important pollinators of some plants. Beetles, and even thrips or ants can sometimes pollinate flowers. Green bottle or carrion flies are important for some flowers, usually ones that exude a fetid odor. Diptera (Flies) are the main pollinators in higher elevations of mountains whereas Bombus species are the only pollinators among Apoidea in alpine regions at timberline and beyond. Other insect orders are sometimes minor pollinators, usually accidentally (e.g., Hemiptera such as Anthocoridae, Miridae).

Bats are important pollinators of some tropical flowers and cactii. Birds, particularly hummingbirds, honeyeaters and sunbirds also accomplish much pollination, especially of deep-throated flowers. Other vertebrates, such as monkeys, lemurs, possums, rodents and lizards[1] have been recorded pollinating some plants.

Plants fall into pollination syndromes that reflect the type of pollinator being attracted. These are characteristics such as: the size, the depth of the corolla, the color (including patterns called nectar guides that may be visible only in ultraviolet light), the scent, amount of nectar, composition of nectar, etc.[2] For example, birds visit red flowers with long narrow tubes and lots of nectar, but are not as strongly attracted to wide flowers with little nectar and copious pollen, which are more attractive to beetles. When these characteristics are experimentally modified (altering color, size, orientation), pollinator visitation may decline[3],[4].

Humans can be pollinators, as many gardeners have discovered that they must hand pollinate garden vegetables, because of pollinator decline. This can involve using a small brush or cotton swab to move pollen, or to simply tap or shake tomato blossoms to release the pollen for the self pollenizing flowers.

Tomato blossoms are self fertile, but have the pollen inside the anther, and the flower requires shaking to release the pollen through pores. This can be done by wind, by humans, or by a sonicating bee (one that vibrates its wing muscles while perched on the flower), such as a bumblebee. Sonicating bees are extremely efficient pollinators of tomatoes, and colonies of bumblebees are quickly replacing humans as the primary pollinators for greenhouse tomatoes.

Many kinds of pollinators, from blue bottle flies, to bumblebees, and leaf cutter bees are cultured and sold for managed pollination. Millions of hives of honey bees are also contracted out as pollinators by beekeepers.

A serious environmental issue is the decline of pollinator populations due to pesticides, movement of pests and pathogens to new areas, habitat loss due to development and many other factors. Some migratory pollinators need nectar corredors to feed them throughout their route, and any development that disrupts any portion of their migratory route can cause loss of pollinators along the entire route. In some cases plant species have become endangered due to the loss of their primary pollinators.

To a large extent, pollinator decline is compensated within agricultural systems by beekeepers becoming migratory, moving bees to follow the seasons of bloom, to concentrate honey bee pollinators where needed at the right time. Honey bees and bumblebees are generalist pollinators, who can pollinate a wide variety of plant species. Other pollinators may be specialists; in fact a there are some pollinator species that only pollinate one plant species. In some cases one pollinator can substitute for another, but pollinators are not always equivalent.