Pascal's triangle is a convenient tabular representation of the binomial coefficients. Already known in the 11th century,[1] it was adopted in the Western world under this name after Blaise Pascal published his Traité du triangle arithmétique ("Treatise on the Arithmetical Triangle") in 1654.

Pascal's triangle appears under different formats. Here is its most common:

We can use Pascal's triangle to compute the binomial expansion of

The triangle shows the coefficients

on the fifth row.

Pascal's triangle has applications in algebra and in probabilities. We can use it to compute the Fibonacci numbers and to create the Sierpinski triangle. After studying it, Isaac Newton expanded the triangle and found new methods to extract the square root and to calculate the natural logarithm of a number. 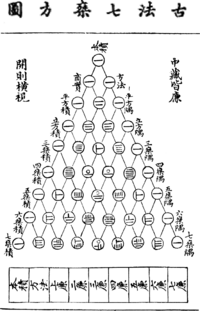 Drawing of Pascal's Triangle published in 1303 by Zhu Shijie (1260-1320), in his Si Yuan Yu Jian. It was called Yanghui Triangle by the Chinese, after the mathematician Yang Hui.
The fourth entry from the left in the second row from the bottom appears to be a typo (34 instead of 35, correctly given in the fifth entry in the same row).

The earliest explicit depictions of a triangle of binomial coefficients occur in the 10th century in commentaries on the Chandas Shastra, an ancient Indian book on Sanskrit prosody written by Pingala between the 5th century BC and 2nd century BC. While Pingala's work only survives in fragments, the commentator Halayudha, around 975, used the triangle to explain obscure references to Meru-prastaara, the "Staircase of Mount Meru". It was also realised that the shallow diagonals of the triangle sum to the Fibonacci numbers. The Indian mathematician Bhattotpala (c. 1068) later gives rows 0-16 of the triangle.

At around the same time, it was discussed in Persia by the mathematician Al-Karaji (953–1029) and the poet-astronomer-mathematician Omar Khayyám (1048-1131); thus the triangle is referred to as the "Khayyam triangle" in Iran. Several theorems related to the triangle were known, including the binomial theorem. It seems that Khayyam used a method of finding nth roots based on the binomial expansion, and therefore on the binomial coefficients.

In 13th century, Yang Hui (1238-1298) presented an arithmetic triangle, which was the same as Pascal's Triangle. Today, Pascal's triangle is called "Yang Hui's triangle" in China. In Italy, it is known as "Tartaglia's triangle", named for the Italian algebraist Niccolo Fontana Tartaglia who lived a century before Pascal.

In 1655, Blaise Pascal published its Traité du triangle arithmétique ("Treatise on arithmetical triangle"), wherein he collected several results then known about the triangle, and employed them to solve problems in probabilities. The triangle was later named after Pascal by Pierre Raymond de Montmort (1708) and Abraham de Moivre (1730).

After that, even if it was useful in many areas of mathematics, most research was done within its descendants, like probabilities and combinatorics.

Each term in the triangle is the sum of the two terms above it[2]. For instance,

. The binomial coefficients relate to this construction by Pascal's rule, which states that if

is the kth binomial coefficient in the binomial expansion of

By convention, the binomial coefficient

is set to zero if

is either less than zero or greater than

To better understand some properties, the triangle is presented differently :

Each coefficient is the sum of the coefficient exactly over it and its left neighbour[2]. For instance,

Using this format, it is easy to apply an index to each row :

Starting the indices at zero facilitates many calculations.

The sum of any row is

being the row index :

For instance, the sum of row 4 is

Since there is a formula for summing a row, then maybe there is one for a column ? It is the case. This time, we index the columns :

Anyone familiar with the factorial function can easily find the general formula. The sum of a column

There is another method to compute this sum, see [3].

Up until now, we added along the rows and the columns. We can add along the diagonals. Doing so from left to right and from bottom to top gives :

The numbers on the right are the Fibonacci numbers.

One Row at a Time

We can build any row if we know the row before just by adding its terms two at a time. However, it is possible to build a row directly. We will build the row 4 in order to discover the rule. Each row starts with 1 :

Once the row and the column indices are know, we can compute the neighbours, either right or left, of any term. Because it only applies to a row, we call it the "row rule".

Polynomials with coefficients in triangle

He extended the triangle along the negative axis. To better understand how he achieved this, let us write the triangle using another format :

Jacob Bernoulli is the "father" of this mathematical object named the "figurate number triangle"[6]. To ease the understanding in the following text, we will call it the "Bernoulli triangle", even if this matrix does not resemble a triangle anymore !

There is an infinity of

. This is another hint that this object is a matrix. Each term in this row obeys the addition rule and the row rule. Some calculations should convince you.

We can further extend the triangle along the negative axis.

As we wrote earlier, Newton did not stop there. He asked himself if there were rows with fractional index, like

In the preceding example, we computed the terms of row 4. Let's use that row again :

What is the first term of row

? By definition, it is 1. What are the terms after that ? We will use the row rule to compute them !

No term goes to zero, even if each comes closer as it is further away from the first.

In the following Bernoulli triangle, using the row rule, we added the rows

Some calculations confirm that the addition rule works, as expected. After some tests, we see that it works only if the row indices have a difference of 1. For instance, we cannot easily build row 3.25 from row 3, but we can easily build row

. Up to a point, there are two matrices in the preceding Bernoulli triangle, one for the integers and one for the multiples of

Newton's generalizations opened routes to areas not primarily connected to integers, namely numeric roots (like the square roots) and logarithms.

Armed with the knowledge of the previous section, we are ready to compute the square root of a number.

We start with this equation :

. This is quite common knowledge, not to say boring.

, a fraction. When the exponent value is 2, we get the square, when it is

, we get the square root. This a rule of the exponentiation. Thus, we can use the triangle's terms to compute a square root.

This observation is technically correct, but there are some details that hugely simplify the calculations. If the exponent is a fraction, then

SHOULD be equal to 1 and, in this case,

MUST be equal to or less than 1. More precisely,

In the last parenthesis,

is lower than 1. Here is how we proceeded. Compute the perfect square lower than

To compute the root square of the parenthesis, we use the row

. The square of this value is

. Compared to the exact value, the error of calculating square root is close to 0.1%. Using more terms will sharpen the result.

We can compute any root with this method. However, it is not used in practice, since there are faster convergent methods, like the Newton-Raphson algorithm.

Computing the Logarithm of a Number

Starting with this equation :

which is good for the square of

. To compute the logarithm, we use the terms in row -1.

If we integrate both sides of the previous equation[8], we get the natural logarithm of a number[9] :

At the beginning of the 21st century, someone found a remarkable equality between the Pascal's triangle and a power series of square matrices.[10]

As you probably know, we can compute the exponential function like this :

Moreover, maybe you remember that we can multiply a square matrix

with any other square matrix of the same rank. Combining these two facts, we get

We are ready to compute the figurate number triangle of order 3 :

To get bigger figurate number triangles, use bigger square matrices, filling the subdiagonal under the main diagonal with

In combinatorics, the Pascal's triangle is simply defined by

. This compact equation provides the basis for many identities. However, it is not easy to manipulate through functions. The matrix exponential opens new territories, since it gives a new way to manipulate the triangle using results from the matrix theory and the function theory. For instance, is the triangle a solution of

Pascal's triangle lends itself to graphical representation. If you draw an histogram of the 19th row, you would get something like the following picture. 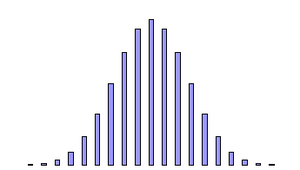 (GNU) Photo: Olier Raby
Histogram of the 19th row within the Pascal's triangle

Suppose we compute the terms of the 1000th row in Pascal's triangle. If we divide each term by 21000 and consider each value as a point on a continuous curve, we would get the following curve.

The normal curve, a limit case of any high-order row within the Pascal's Triangle.

We already presented some useful equations for building the Pascal's triangle. Since they are true within a field (a commutative ring), they are called identities in mathematics. Below, we list some more, but be aware there are literaly thousands of them.

The previous identities remain true if the variables are complex (e.g.,

). Some identities relating to Pascal's triangle are true when

is an integer, we fall back on the first identity. The number of terms is still infinite, but almost all of them are equal to zero (those in the tail).

Ones excepted, all the terms in any row where the second term is a prime number are multiple of the prime number. For instance, if a row starts with

Odd numbers within a row

Each row of order

, only contains odd numbers. No other row has this property.

We saw the normal curve, a way to represent the binomial coefficients as a continuous curve. In its simplest form, its equation

and the area under that curve is

. The equation of this curve involves

, while its area involves

. How can this be possible, since the binomial coefficients are obtained by adding natural numbers, and we divided those coefficients by a power of 2 ?

Applying modulo 2 to every number in Pascal's triangle, we get

from the Pascal's triangle :

. This formula is not used in practice since

must be very large to compute

to any decent precision.

Dividing the underlined numbers by 1, 2, 3, 4,..., we get 1, 1, 2, 5, 14,... The Catalan numbers appear in solutions of many combinatorial problems.[15] There is another way to compute these numbers : in the triangle, subtract the neighbour from each underlined number.

There is a surprising way to compute them. Square the terms in each row and add them :

These are the underlined values in the previous triangle.

Somebody found a strange property relating geometry to the numbers within the Pascal's triangle.

A dot has one vertex (1). A segment has two vertices and one line (2,1). A triangle has three vertices, three edges and one surface (3, 3, 1). A triangular pyramid has four vertices, six edges, four surfaces and one volume (4, 6, 4, 1). And so on. Thus, the element count of a minimal regular geometric object (build from regular shapes) in 1D, 2D, 3D, 4D, etc., is specified by a row in the Pascal's triangle.

Bernoulli numbers, named in honor of Jacob Bernoulli who studied them intensively, arise in a wide variety of analytical and combinatorial contexts. They are[16]

is computed twice, but this arrangement clearly shows the binomial coefficients.[17]