From Citizendium
(Redirected from Persia)
Jump to: navigation, search

Iran (Persian language: ايران, meaning "land of the Aryans"), officially the Islamic Republic of Iran (Persian language: جمهوری اسلامی ايران), is a Middle Eastern Islamic Republic. It is seen as the descendant of the Ancient Persian Empire and Persians make up an ethnic majority of the Iranian population. The official language of the country is Persian. The official religion of the country is Twelver Shi'a Islam. 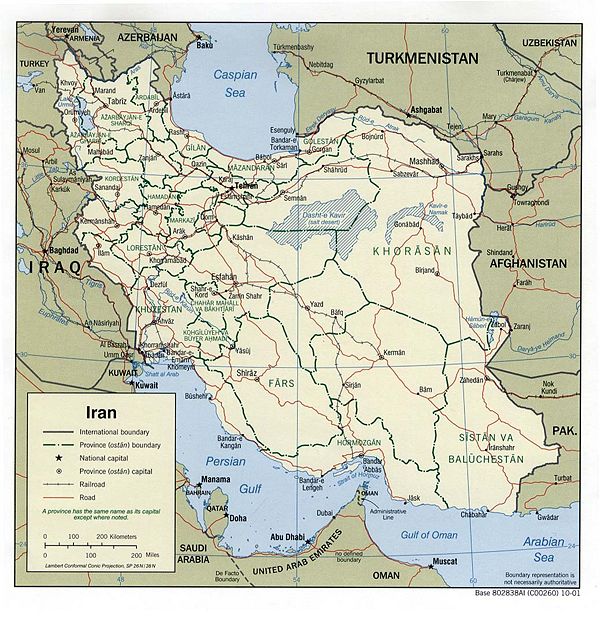 Iran borders the Caspian Sea and Turkmenistan to the north, Iraq and the Persian Gulf to the west and south, and Afghanistan and Pakistan to the east. Much of Iran is situated on the Iranian Plateau. Much of Iran is mountainous. The center of Iran is occupied by two large deserts which contain very little life. Much of the population lives in the western half of the country.

Much of the country is geologically active and there have been recent major earthquakes.

Iran's position is strategic. It can dominate the entrance to the Persian Gulf from the Indian Ocean, giving it a potential military influence over regional petroleum exporting, as well as its economic influence as a petroleum exporter.

It is the logical route to the sea for a good part of Central Asia. Until recently, the only short length of railroad in Afghanistan connected to Iran.

Iran is one of the world's most ancient civilizations. Iranians, called Persians by the Greeks, built a huge empire in the 6th and 5th centuries BC before being conquered by the Greeks under Alexander the Great and then by the Romans. Iran regained part of its empire under the Sassanids before they were conquered by the Arabs, who introduced Islam and greatly influenced the Iranian culture and language. Iran was ruled by the Arabs for several hundred years, then by a succession of tribal dynasties after the Arab empire under the Caliphs broke up. The Safavids gained control of Iran in the 16th century and brought a new golden age to Iran. The Safavid empire collapsed in 1722, and Iran increasingly came under the influence of various European powers. In the early 20th century, the Pahlavi dynasty consolidated power. It ruled until 1979, when the Iranian revolution established the current Islamic Republic. Invaded by Iraq in an attempted land-grab in 1980, the Iran-Iraq War concluded in 1988. Despite initial disorganization and casualties in the hundreds of thousands, the new regime consolidated its power in its territorial defense. 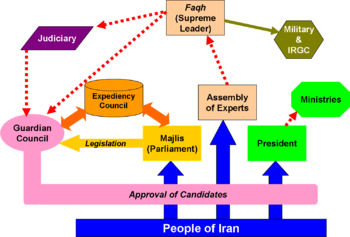 The Iranian Government is a complex theocratic republic, with a powerful head of state, the Supreme Leader or faqh, who is a cleric and derives his authority from the principle of Wilayat al-faqih. The Supreme Leader directs the Iranian Security Forces, although the President directs of the Ministry of Interior and the police. He is appointed, and in principle could be removed, by the Assembly of Experts.

The President is the head of government (not including the military). He is directly elected, but candidates are approved by the Council of Guardians.

There is an elected Parliament, the Majlis.

The Council of Guardians approves all candidates for direct election, including the Parliament, Assembly of Experts, and President. It consists of six clerics and six jurists who determine if the legislation approved by the Majlis. They determine if legislation from the Majlis is correct according to religious principles.

The Expediency Council is in charge of mediating disputes between the parliament and the Council of Guardians, and also serves as an advisory council to the Supreme Leader.

Iran has both opportunity and challenge in a relatively young population, with excellent education. There is, however, high unemployment, with emigration of skilled people. There is still an overreliance on the petroleum sector, especially to fund the government. High oil prices in recent years allowed Iran to greatly increase its export earnings and amass nearly $100 billion in foreign exchange reserves. But with oil prices currently below $40 per barrel, the Iranian government is facing difficulties; their 2009 budget anticipates lower oil prices.[1] "Iran’s economy is still unable to generate enough needed jobs to absorb the new flows into the labor market and at the same time significantly reduce unemployment. In addition to employment creation, inflation is high; price subsidies and controls hinder efficiency; and major structural impediments prevent private sector development." [2] The country’s health and education indicators are among the best in the region. Iran continues to suffer from double-digit unemployment and inflation - inflation climbed to a 28% annual rate in 2008.

The state still controls a substantial part of the economy, and is not efficient. It controls over 60 percent of the manufacturing sector, and the financial sector is also dominated by public banks despite establishment of four private banks in the early 2000s. There are quasi-public groups called bonyads with an additional major involvement the manufacturing and commercial sectors.

In July 2006, the Government announced a major privatization program whereby large, strategic industries mandated to be state-owned by Article 44 of the Constitution could be privatized. These include, among others, oil distribution, utilities, much of the financial sector, industrial and commercial sectors. However, implementation of the program has been hindered by low demand for large public sector assets by the private sector. In order to improve the operational environment for private firms and to enhance private returns to investment, the government launched in 2008 a program of investment climate reforms.[2]

Private sector activity has typically limited to small-scale workshops, farming, and services, [1], although the bazaari class of merchants has historically been a powerful force in national politics.

President Ahminejad has proposed reforms to Iran's system of price controls and subsidies, particularly on food and energy. However, previous government-led efforts at reform - such as fuel rationing in July 2007 and the imposition of the Value-Added Tax (VAT) in October 2008 - were met with stiff resistance and violent protests.

Significant informal market activity flourishes. Corruption and shortages of goods are widespread, although a certain amount of what would be regarded, in the West, as corruption is customary in the marketplace.

Problems with macroeconomic instability persist in spite of major efforts of the Central Bank, inflation has continued to increase while the government drew down on its Oil Stabilization Fund when oil prices were very high.

According to the World Bank, "A major challenge is how to channel the network of untargeted energy subsides -- amounting to more than 10 percent of gross domestic product (GDP) -- into productive, job-creating, private-sector investment. Another growth constraint is limited access to knowledge and information technology and related infrastructure. " Nevertheless, Iran has some extremely skilled information and technology resources. Its military sector is largely independent in production of integrated circuits and advanced radar. The Iranian nuclear program clearly is expensive.

The majority of Iranians are ethnically Persian. Other ethnic groups, such as Azeris, make up significant minorities of the population.

Iranian culture is a rich combination of Persian and Arabic influences. Islam plays an important role.

The main language of Iran is Persian, also called Farsi. Many other languages are spoken by members of different ethnic groups.
Retrieved from "https://en.citizendium.org/wiki?title=Iran&oldid=100750197"
Categories:
Hidden category: