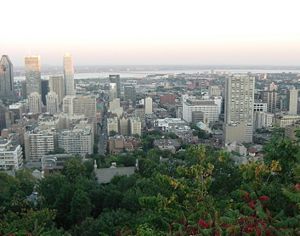 Montreal is the second most populous city in Canada and the largest city in the province of Quebec. It is located on an island on the St Lawrence River and is the largest island in the Hochelaga Archipelago, a group of over 230 islands at the confluence of the Saint Lawrence River and Ottawa River. Montreal is 150 miles upstream from the provincial capital, Quebec City.

Montreal's Census Metropolitan Area in 2006 was 3,635,571 [1]. Montreal is a majority French-speaking city, with a substantial English-language minority and cosmopolitan mix of languages and cultures from around the world.

Archeological evidence suggests that various nomadic native peoples had occupied the island of Montreal for at least 2,000 years before the arrival of Europeans.[2] The Iroquois people established a village, called Hochelaga, at the foot of Mount Royal.[3]

The French explorer Jacques Cartier visited Hochelaga on October 2, 1535, claiming the Saint Lawrence River for France.[4] He estimated the population to be "over a thousand". In 1639, Jérôme Le Royer de La Dauversière obtained a seigneurial title to the Island of Montreal in the name of the Société de Notre-Dame de Montréal to establish a Roman Catholic mission for evangelizing natives. Ville-Marie, the first permanent French settlement on the Island, was founded in 1642. Paul Chomedey de Maisonneuve was governor of the colony. By 1651, Ville-Marie had been reduced to less than 50 inhabitants, until Maisonneuve brought new recruits from France on November 16, 1653. Marguerite Bourgeoys founded the Congrégation de Notre-Dame, Montreal's first school, that same year. In 1663, the Sulpician seminary became the new Seigneur of the island.

Ville-Marie became a centre for the fur trade and a base for further French colonization in North America. The French and Iroquois Wars would threaten the survival of Ville-Marie until a peace treaty, called the Great Peace of Montreal, was signed in 1701[5]. With this treaty, Montreal and the surrounding seigneuries could now develop without the fear of Iroquois raids.[6]

Ville-Marie remained a French colony until 1760, when Pierre François de Rigaud, Marquis de Vaudreuil-Cavagnal surrendered it to the British Army under Jeffrey Amherst during the French and Indian War. The Treaty of Paris in 1763 ended the Seven Years' War and ceded eastern New France to the Kingdom of Great Britain. American revolutionaries under General Richard Montgomery briefly captured the city during their 1775 invasion of Canada.[7]

Montreal was briefly the capital of the United Province of Canada, from 1844 to 1849, until the House of Assembly was burned by an angry mob. [8]

In recent years, all municipalities on the island of Montreal were merged into a single city, as part of a series of municipal fusions across the province mandated by the former Parti Quebecois government. The Quebec Liberal Party ran on a platform that included "demergers," and with their subsequent election, many former Montreal island municipalities regained their city status.

Montreal was once the business capital of Canada, with Saint James Street -- now renamed Saint Jacques Street -- its financial centre. Montreal influence began to wane in the 1970s, due to a variety of factors including the impact of the Saint Lawrence Seaway, which allowed Great Lakes ports to take business from Montreal, rising political and linguistic tensions in Quebec, and terrorist violence from the Front de libération du Québec. The election of the separatist Parti Québécois in 1976 sparked an exodus of head offices that further diminished the city's economic importance. [9] Nevertheless, the city remains the site of many corporate and public sector headquarters. The Cirque de Soleil is based in Montreal, as are two Canadian cultural agencies, Telefilm Canada and the National Film Board of Canada. The International Civil Aviation Organization, the United Nations body governing civil aviation, is headquartered in Montreal, as is its industry counterpart, the International Air Transport Association.[10].[11].

One of the key geographical features of Montreal is Mount Royal, actually a ring of small peaks in the centre of the city. This complex of hills includes Westmount and Outremont, two upscale Montreal residential neighbourhoods. The mountain is home to Mount Royal Park, a major urban park designed by Central Park designer Frederick Law Olmsted.

Mark Twain once remarked of Montreal that "This is the first time I was ever in a city where you couldn't throw a brick without breaking a church window." [12] Accordingly, the city features a wide array of churches, most but by no means all of the Quebec's predominant Roman Catholic faith. Notre-Dame Basilica in Old Montreal is the city's most famous cathedral, along Mary, Queen of the World Cathedral in downtown Montreal and Saint Joseph's Oratory, built in the early 20th century.

The 1967 International and Universal Exposition, popularly known as Expo 67, is considered to be the most successful World's Fair of the 20th century, with over 50 million visitors and 62 nations participating. It also set the single-day attendance record for a world's fair with 569,000 visitors on its third day.

Though most pavilions were temporary structures, several remaining structures have become Montreal landmarks, including the geodesic dome US Pavilion, now the Montreal Biosphere, as well as Moshe Safdie's striking Habitat 67 apartment complex. The fair's pavilions were concentrated on two islands, Saint Helene's Island and the man-made Île Notre-Dame, with an entrance and additional structures in the Cité du Havre harbour district. An amusement part was built for Expo on Saint Helen's Island, called La Ronde. Today it is part of the Six Flags amusement park chain. 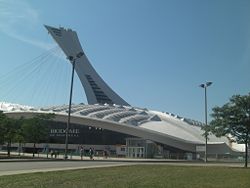 The Montreal Biodome was originally built as a velodrome. Today it is home to many different species inhabiting four distinct artificial environments.

The city played host to the 1976 Summer Olympics. Though successful in many respects, the games were marred by a boycott by African nations, as well as the city's failure to complete its stadium in time for the Games. Designed by French architect Roger Taillibert, the stadium's retractable roof, suspended by cables from the world's tallest inclined tower, only worked for a brief period and was replaced by a permanent roof, which in turn needed to be replaced when it ripped. A 55-tonne beam also fell. Taillibert refused to take accept any fault, blaming Quebec engineers.[13] The cost of building the Olympic facilities also left the city with a massive debt that took a generation to pay off. [14]

Today, the Olympic velodrome has been converted to the Montreal Biodome, an indoor zoo. The twin-tower Olympic Village are condos. The Olympic Stadium, seldom used, will host the 2008 Grey Cup championship.

Key museums in Montreal include the Montreal Museum of Fine Arts, with a new pavilion by Habitat 67 designer Moshe Safdie; the Musée d'art contemporain, located on Place des Arts performing arts complex, and the Canadian Centre for Architecture, the brainchild of Bronfman Family heiress Phyllis Lambert.

Montreal is host to many festivals, especially during the summer months, including the World Film Festival, Just for Laughs Comedy Festival, the Montreal International Jazz Festival and Francofolies.

Montreal's Jewish community has produced two well-known Montreal delicacies, the Montreal bagel, sweeter and chewier than the regular type of bagel, as well as Smoked meat.

The Montreal Canadiens ice hockey team is the unquestioned king of the Montreal sports scene, with a record 24 Stanley Cup championships to their credit. [15] The city also has a Canadian Football League franchise, the Montreal Alouettes, and the city will play host to the 2008 Grey Cup, the CFL championship game.[16] The Montreal Impact is the city's pro soccer team. The Montreal Expos Major League Baseball franchise folded and was relocated as the Washington Nationals.