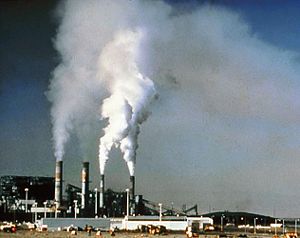 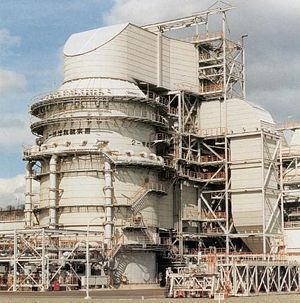 Flue gas desulfurization is commonly known as FGD and is the technology used for removing sulfur dioxide (SO2) from the exhaust flue gases of power plants that burn coal or oil to produce steam for the turbines that drive their electricity generators. The most common types of FGD contact the flue gases with an alkaline sorbent such as lime or limestone. [1][2][3] As sulfur dioxide is responsible for acid rain formation, stringent environmental protection regulations have been enacted in many countries to limit the amount of sulfur dioxide emissions from power plants and other industrial facilities.

Prior to the advent of strict environmental protection regulations, tall flue gas stacks (i.e., chimneys) were built to disperse rather than remove the sulfur dioxide emissions. However, that only led to the transport of the emissions to other regions. For that reason, a number of countries also have regulations limiting the height of flue gas stacks.

For a typical conventional coal-fired power plant, FGD technology will remove up to 99 percent of the SO2 in the flue gases.

Methods for removing sulfur dioxide from flues gases have been studied for over 150 years. Early concepts useful for flue gas desulfurization appear to have germinated in 1850 in England.

With the construction of large-scale power plants in England in the 1920s, the problems associated with large volumes of SO2 emissions began to concern the public. The problem did not receive much attention until 1929, when the British government upheld the claim of a landowner against the Barton Electricity Works for damages to his land resulting from SO2 emissions. Shortly thereafter a press campaign was launched against the erection of power plants within the confines of London. This led to the imposition of SO2 controls on all such power plants.[4]

As of about 1999-2000, there were 678 FGD units operating worldwide (in 27 countries) producing a total of about 229 gigawatts. About 45% of that FGD capacity was in the United States, 24% in Germany, 11% in Japan and 20% in various other countries. Approximately 79% of the units, representing about 199 gigawatts of capacity, were using lime or limestone wet scrubbing. About 18% (or 25 gigawatts) utilized spray-dry scrubbers or dry sorbent injection systems.[6][7][8]

SO2 is an acid gas. Therefore, the most common large-scale FGD systems use an alkaline sorbent such as lime or limestone to neutralize and remove the SO2 from the flue gas. Since lime and limestone are not soluble in water, they are used either in the form of an aqueous slurry or in a dry, powdered form.

The reaction taking place in wet scrubbing using a CaCO3 (limestone) slurry produces CaSO3 (calcium sulfite) and can be expressed as:

When wet scrubbing with a Ca(OH)2 (lime) slurry, the reaction also produces CaSO3 (calcium sulfite) and can be expressed as:

When wet scrubbing with a Mg(OH)2 (magnesium hydroxide) slurry, the reaction produces MgSO3 (magnesium sulfite) and can be expressed as:

Aqueous solutions of sodium hydroxide (known as caustic soda or simply caustic) may also be used to neutralize and remove SO2 from flue gases. However, caustic soda is limited to small-scale FGD systems, mostly in industrial facilities other than power plants because it is more expensive than lime. It has the advantage that it forms a solution rather than a slurry and that makes it easier to operate. It produces a solution of sodium sulfite or sodium bisulfite (depending on the pH), or sodium sulfate that must be disposed of. This is not a problem in a paper mill for example, where the solution can be recycled and reused within the paper mill. 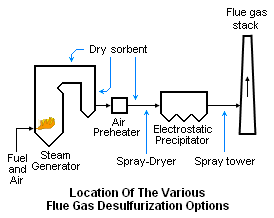 There are various types of wet scrubbers. For example, spray towers, venturi scrubbers, packed towers and trayed towers. Slurries would cause serious erosion problems in a venturi scrubber because of the high speeds at the throat of the venturi section. Packed towers or trayed towers would plug up if handling slurries. For handling slurries, the spray tower is a good choice and it is in fact a commonly used choice in large-scale FGD systems.[3][9][10]

Spray towers are used downstream of the particulate equipment (electrostatic precipitator or baghouse) where the flue gas contains very little, if any, combustion fly ash. In a spray tower system, the sorbent slurry is simply injected via spray nozzles into a vertical tower where the slurry droplets are contacted with the upflowing flue gas.

Part of the water in the slurry is evaporated by the hot flue gas and the flue gas becomes saturated with water vapor.

The SO2 dissolves into the slurry droplets and reacts with the alkaline sorbent particles. The slurry falls to the bottom of the spray tower and is sent to a reaction tank where the reaction is completed and a neutral salt is formed. In a regenerable system, the residual slurry is recycled back for reuse in the spray tower. In a once-through system, the residual slurry is dewatered and either disposed of or oxidized to CaSO4 · 2H2O and sold as a by-product gypsum.

Spray-dryers are used upstream of the particulate removal equipment (electrical precipitator or baghouse) where the flue gas contains the combustion fly ash. In a spray-dryer system, the alkaline sorbent is usually lime slurry. The slurry is atomized and sprayed into a vessel as a cloud of fine bubbles where it contacts the hot flue gas. The water is completely evaporated by the hot gas and the residence time in the vessel (about 10 seconds) allows the SO2 and any other acid gases, such as SO3 and HCl, to react with the lime to form a dry powder of calcium sulfite, calcium sulfate and unreacted lime.[3][11][12]

The dry FGD system simply injects powdered lime or limestone sorbent directly into the flue gas. As shown in the adjacent location diagram, the dry sorbent may be injected into any one of three locations: (1) the upper section of the steam generator, (2) the economizer section of the steam generator or the ducting between the air preheater and the electrostatic precipitator.[2][3][11][13]

The powdered sorbent is pneumatically injected through lances designed to distribute the sorbent evenly across the flow path of the flue gas.

Partial flue gas desulfurization (FGD) can achieve about 50-70 % removal of sulfur dioxide by the injection of dry limestone just downstream of the air preheater. The resultant solids are recovered in the electrostatic precipitators along with the fly ash.

In power plants burning pulverized coal, wet flue gas desulfurization (FGD) that contacts the flue gases with lime slurries (in what are called wet lime scrubbers) can achieve 95% sulfur dioxide removal without additives and 99+% removal with additives. Wet FGD has the greatest share of the FGD usage in the United States and it is commercially proven, well established technology.[14]

The typical older FGD units in power plants burning pulverized coal within the United States achieve average sulfur dioxide emission levels of about 0.340 kg/MWh (0.22 lb SO2 /106 Btu), which meets the level to which those units were permitted.

The information in this section was obtained from a U.S. EPA published fact sheet.[3]

Approximately 85% of the flue gas desulfurization units installed in the US are wet scrubbers, 12% are spray dry systems and 3% are dry injection systems.

The capital, operating and maintenance costs per short ton of SO2 removed (in 2001 US dollars) are:

An alternative to removing sulfur from the flue gases after burning is to remove the sulfur from the fuel before or during combustion. Hydrodesulfurization of fuel has been used for treating fuel oils.

Fluidized bed combustion adds lime to the fuel during combustion. The lime reacts with the SO2 to form sulfates which become part of the combustion ash.

Fossil fuels such as coal and oil contain significant amounts of sulfur. When burned, about 95 percent or more of the sulfur is generally converted to sulfur dioxide (SO2). This happens under normal conditions of temperature and of oxygen present in the flue gas. However, there are circumstances under which this may not be the case.

For example, when the flue gas has too much oxygen and the SO2 is further oxidized to sulfur trioxide (SO3). Actually, too much oxygen is only one of the ways that SO3 is formed. Gas temperature is also an important factor. At about 800 °C, formation of SO3 is favored. Another way that SO3 can be formed is through catalysis by trace metals in the fuel. This is particularly true for heavy fuel oil, where small amounts of vanadium are present. In whatever way that SO3 is formed, it does not behave like SO2 in that it forms a liquid aerosol known as sulfuric acid (H2SO4) mist that is very difficult to remove. Generally, about 1% of the sulfur dioxide will be converted to SO3. Since SO3 an acid gas, just as is SO2, it is also removed by the alkaline sorbents used in FGD systems.