Bananas are the fruit of a wide range of species in the Musa taxonomic genus.[1] Originating in Southeast Asia, they have become so intrinsic to the diets of Africans and South Americans that many people mistakenly believe them to be native. The overwhelming majority of bananas are shades of yellow when ripe, but there are also red, pink and purple species. They are long and curved in shape and grow in bunches called hands with each individual fruit measuring 7-9 inches in length.

Of the more than 500 banana varieties grown worldwide, the most commonly consumed variety is the Cavendish, which are grown in Africa, Latin America, and Southeast Asia. They are a triploid version of the wild species Musa acuminata and consequently have the desirable seedless trait. Since they are sterile, Cavendish variety banana plants are clones from an original plant and consequently lack genetic diversity and are susceptible to disease. This and habitat destruction have led to fears amongst the scientific community that the days of the banana are numbered. A similar fate befell the predecessor to the Cavendish, the Gros Michel, which was wiped out by Panama disease in 1960s. A further problem is that all new plants must be grown from cuttings - so new disease resistant hybrids cannot be made by breeding the Cavendish variety with wild relatives.[2]

The origins of the banana point to the jungles of Malaysia, Indonesia, and the Philippines. The earliest evidence of banana cultivation was discovered in Papua New Guinea at Kuk Swamp where researchers date the farm to between 4500-5000 BC.[3] The Musa is believed to be the "tree of paradise" that is mentioned in the Qur'an and there are some scholars who claim it was the banana, rather than the apple, that tempted Adam and Eve in the Bible.[4] The first written account of the banana appeared in India in ancient Buddhist texts during the 6th century BC, although it is unclear how they arrived there. In 327 BC, Alexander the Great, returning from conquest in India, brought bananas to Europe.

Until recently, it was believed that the banana was brought to Africa from the Middle East in 7th century AD. The fruit was given the name banan which is derived from the Arabic word for finger. Bananas spread throughout Africa with the slave trade and thrived in the area surrounding Lake Victoria. Recent archaeological evidence, however, has produced two reports in which phytoliths dating to 500 BC were found in Cameroon[5] and 3000 BC in Uganda.[6]

The banana began its spread through the western world with the Portuguese, who brought the plant from West Africa to the Canary Islands in 1402. The banana first arrived in the Americas with Spanish missionaries in the early 16th century and was cultivated in Santo Domingo (modern day Dominican Republic) in 1516.[7] It then migrated throughout the Caribbean, Central and South America with Portuguese and Spanish expansion.

The United States first saw the fruit in the 1870s. Originally seen as a delicacy, the fruit grew in popularity and by 1900 saw the emergence of large commercial plantations in Central America ran by companies such as United Fruit Company and Standard Fruit Company.

Besides being eaten all over the world as a wholesome snack at any time of day, bananas lend themselves well to cooking, particularly in cakes or loaves generally known as banana bread. Some varieties are used as main courses and side dishes, many more are the chief ingredients in snacks and desserts including a wide array of puddings and cakes. Bananas work well with citrus and other tropical fruits, as well as flavorful seasonings such as curry, cinnamon, and ginger.[8] They can also be dried, either in the open air or by other means, and enjoyed individually or as part of a trail mix.

Although all unripe bananas are green in color, the term “green banana” usually refers to species of musa that are edible, but, due to a lack of customary banana texture and sweetness, are used for cooking rather than being eaten fresh. In southern Uganda, a variety called matoke was so widely used that it is now recognized and eaten all over the country. In many countries, green bananas are vital to the local economy as a cash crop. In India they are used in various ways—in the South as banana chips, in the East as an essential ingredient of shukto.

In several cultures, banana leaves are used as wraps in which other foods are boiled, steamed, fried or roasted. The leaves keep the ingredients moist, flavourful and fragrant.

Banana and plantain leaves are also used as plates, trays and packaging.

Plantains are in the same genus as bananas but are a different species. In some languages, all musas are lumped together as differing varieties of “bananas”. 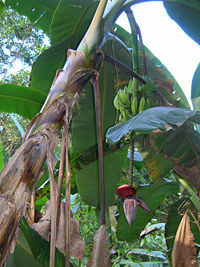 Bananas are rich in iron and potassium salts. Milk and bananas therefore complement each other and form a sort of complete food. The rich content of potassium salts make it a part of recommended diet for hypertensive patients. Bananas are extremely low in fat and are a good source of fiber. A medium-sized banana contains approximately 105 calories.[9]

Bananas make interesting specimen plants. They are tropical plants, which makes them a challenge to grow in temperate areas. They therefore have a lot of interest for gardeners. Some varieties of banana can survive in sub-tropical climates, others can be successfully grown indoors in pots or tubs. A recent (2007) segment on the Gardening Australia television program featured a very tall, fruiting banana tree growing in the gardener's living room.