Alexander the Great (356 BC - 323 BC) was a ruler of the kingdom of Macedon; he is most famous for conquering the Persian Empire. 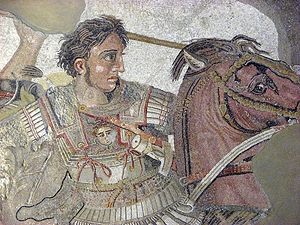 Alexander (Alexandros, "defender") was the eldest legitimate son of Philip II of Macedon and his fourth wife Olympias. He was born in Pella or in Aigai (modern Vergina). The union between his parents also produced a daughter, Cleopatra, born two years after Alexander.

Alexander's mother was a princess from Epirus, a region of northwestern Greece. Ancient sources describe Olympias as a temperamental woman and a follower of mystery cults of the godsOrpheus and Dionysus. Olympias was said to have snakes as pets and use them to terrify her enemies. Alexander remained very close to his mother during his life. When he left Macedonia for his expedition in Asia, Olympias worked to secure his position as king and the two exchanged letters.

The writings of Plutarch contain some legends regarding Alexander’s childhood which aim to illustrate his precocity, courage and intelligence. When Alexander was about 9 his father bought a stallion named Bucephalus (Boukephalus, "ox head") that nobody could tame. Alexander asked his father to allow him to try to tame the horse; Philip agreed and Alexander promissed that if he failed he would pay its price. He noted that the horse was scared by its own shadow, so he turned him round to face the sun. By doing this he managed to pacify the animal and mount him. Bucephalus became Alexander’s war-horse and accompanied him to India where he died. In his honor Alexander gave the name “Bucephala” (or “Bucephalia”) to a city.

At the age of 14 Alexander joined the “School of Royal Pages”, an institution headed by the king and attended by the sons of the aristocratic families of Macedonia. For four years the boys (who later became generals or governors) lived at the court, where they were taught military arts and several subjects from the humanities. One of Alexander’s teachers at the school was Leonidas, a relative of Olympias, described as a strict man and his second father.

Philip hired the best teachers for the young prince, including Aristotle who he brought from Greece to Macedonia. Aristotle taught at the Sanctuary of the Nymphs, near Mieza, a place known for its natural beauty. Alexander was tutored by Aristotle for three years, from the age of 13 to 16.

Alexander was raised as a prince and a possible successor to the throne. In 340 BC, while his father was engaged in the siege of Byzantium, Alexander, age 16, was left as a regent of the kingdom and even took part in a short military campaign and some diplomatic negotiations. He defeated the Maedi (a Thracian people) in the Strymon valley and captured their chief city. After expelling the native population of the city, he repopulated it with Macedonians, Greeks and Thracians and gave it the name of Alexandropolis.

Variable Fortunes at Court & the Assassination of Philip

The good relationship between Alexander and his father was short-lived. A dispute erupted because of a marriage between Philip and Cleopatra, daughter of a Macedonian noble and a niece of Attalos, one of Philip's generals. In ancient Macedonia polygamy was allowed (it served as a way to secure several heirs to the throne and to cement political alliances), but Alexander, who was very attached to his mother, felt her position was being demolished and his own hopes of succeeding his father were fading away. During the wedding feast Attalos made a toast in which he asked the gods to grant a child to Philip and Cleopatra that could become a legitimate ruler of Macedonia. Alexander was irritated by the request and threw a glass of wine in Attalo's face. Philip reacted by trying to attack his son with a sword, but since he was too drunk he tripped. After the episode, Olympias and Alexander were banished from the court (Olympas left for Epirus and Alexander to Illyria).

After the death of his father, and the death of the regicide Pausanias, Alexander turned to consolidating his power. He needed to accomplish two tasks: he needed to secure his hold on the Macedonian throne and he needed to reassert his control over the Greek states his father had forced into the League of Corinth. He accomplished both tasks with dispatch.

Alexander secured his rule over Macedonia in a variety of ways. First, he made sure to dispose of or co-opt any potential rivals for the throne. Secondly, he made a bid for public support by making a speech to all the Macedonians in Aegae that he could find.

Alexander did not shrink from the grand ambitions of his father. Hand in hand with his strategy for securing the throne, Alexander also began to prepare for the conquest of Asia. He needed to keep control over the other Greek states in the League of Corinth, and he needed to secure Macedonia’s territory in Europe. To accomplish the first task, he gave a speech to the foreign emissaries who were already present in Aegae for the festivities. Then, as a show of strength, he carried out a brief campaign against the a select few Greek states.

In 335 BCE, he then organized a meeting of the Hellenic League and was recognized as "Supreme Commander of the Greek Forces." Alexander began his campaign against the Thracians and Triballians, crushing them. However, the Greek States began to conspire against him, so he marched back to Thebes. He refused offers of peace, blockaded the roads, and breached the walls of Thebes, killing 6,000 and razing the city. A total of 20,000 Thebans were sold into slavery. The Athenians terrified, Alexander then began preparations for the invasion of Persia.

The March into Asia

In 334 BCE, ALexander marched on the Persians with a force of 40,000 infantry and 6,000 cavalry. In May of 334, Alexander defeated the Persians at the Granicus. Alexander's Companion Cavalry crushed the Persian center, which had been weakened to strengthen their left wing against Alexander. Persian casualties totaled 22,500, yet the Greeks were not even ordered to pursue the routed army. The Greeks butchered the Greek mercenaries under Darius as they were regarded as traitors.

The conquest of Asia Minor

Alexander's army marched into Lydia; all the towns surrendered to them. Welcomed as a liberator, Alexander continued on to Issus, where Darius was waiting with 600,000 men.

After marching 70 miles in two days, Alexander reached the plains of Syria to combat at Darius. Unfortunately, Alexander arrived after Darius had already marched northward into Cilicia where he believed Alexander to be. Alexander became enraged when he heard that the Persians had butchered many Greeks in a military hospital; he returned north to face Darius. At Issus, the Persian right wing of cavalry was the main offensive. Alexander lead his companion cavalry into the persian archers, sundering them. Alexander's cavalry on their left held off Darius's elite cavalry, and when Alexander charges into the center toward Darius, the Great King fled from the battle, leaving treasures, a disoriented army, and his family in Alexander's hands.

The fall of the Persian empire

Alexander won his final victory over Darius III in the Battle of Gaugamela in 331 BCE, after which Darius was killed by one of his subordinates.

The invasion of India

The last days of Alexander