Artemisia vulgaris (Mugwort or Common Mugwort) is one of several species in the genus Artemisia with names containing mugwort. It is also occasionally known as Felon Herb, St. John's Plant, Chrysanthemum Weed, Wild Wormwood, and Mogusa in Japan. It is native to temperate Europe, Asia and northern Africa, but is also present in North America where it is an invasive weed. It is a very common plant growing on nitrogenous soils, like weedy and uncultivated areas, such as waste places and roadsides.

It is a tall herbaceous perennial plant growing 1-2 m (rarely 2.5 m) tall, with a woody root. The leaves are 5-20 cm long, dark green, pinnate, with dense white tomentose hairs on the underside. The erect stem often has a red-purplish tinge. The rather small flowers (5 mm long) are radially symmetrical with many yellow or dark red petals. The narrow and numerous capitula (flower heads) spread out in racemose panicles. It flowers from July to September.

A number of species of Lepidoptera (butterflies and moths) feed on the leaves and flowers; see List of Lepidoptera which feed on Artemisia for details.

Mugwort is often said to derive from the word 'mug' because it was used in flavoring drinks. However, this may be a folk etymology. Other sources say Mugwort is derived from the old Germanic muggiwurti, meaning "midge plant", which refers to its use since ancient times to repel insects, especially moths, or to attract midges, flies, and gnats, which can then be caught and disposed of by putting a bag over the plant.[1]

There are other species in the genus Artemisia called mugwort:

Chinese mugwort (A. verlotiorum) is often confused with common mugwort (A. vulgaris). It has oblonge reddish to brown capitula, its stems are green and the leaves broader, lighter coloured and more dense on the stem. The plant has a stronger and more pleasant smell than that of the common mugwort (whose aroma is really light). It flowers very late in the summer, but reproduces mainly by stolons, thus forming thick groups. Chinese mugwort shares the same habitat as common mugwort and both are very common. 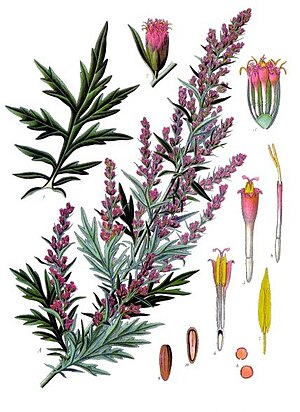 Mugwort contains thujone, which is toxic. Pregnant women, in particular, should avoid consuming large amounts of mugwort. The species is little used now due to toxicity concerns, but has a number of recorded historic uses in food, herbal medicine, and as a smoking herb.

The leaves and buds, best picked shortly before the plant flowers in July to September, were used as a bitter flavouring agent to season fat meat and fish. In Germany, it was mainly used to season goose, especially the roast goose traditionally eaten for Christmas.

Mugwort is also used in Korea and Japan to give festive rice cakes a greenish colour.

In the Middle Ages Mugwort was used as part of a herbal mixture called gruit, used in the flavouring of beer before the widespread introduction of hops.

The plant contains ethereal oils (such as cineole, or wormwood oil, and thujone), flavonoids, triterpenes, and coumarin derivatives. Chewing some leaves will kill the fatigue and stimulate the nervous system. It was also used as an anthelminthic, so it is sometimes confused with wormwood (Artemisia absinthium).

Mugwort is used in the practice of traditional Chinese medicine in a pulverized, aged, and recompounded form called moxa. The British RCT yielded results that indicate that moxibustion of mugwort was indeed effective at increasing the cephalic positioning of fetuses who were in a breech position before the intervention. Since it also causes uterine contractions, it has been used to cause abortion. It also plays a role in Asian traditional medicine as a method of correcting breech presentation. This method is termed moxibustion. However, a recent randomized controlled study of 123 patients yielded inconclusive evidence. [2]

Much used in witchcraft, mugwort is said to be useful in inducing lucid dreaming and astral travel. Smoking of mugwort, or consumption of the plant or a tincture thereof, prior to sleeping is said to increase the intensity of dreams, the level of control, and to aid in the recall of dreams upon waking. More safely, a pillow of dried mugwort leaves can be left under a dreamer's pillow for the same effect.