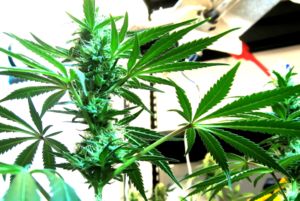 Marijuana is a term primarily used in United States to denote the cannabis plant, often in the context when the plant is used as a psychoactive drug. The term itself was originally borrowed from Spanish by people who worked to prohibit the plant in United States.

Marijuana is product of plants of the Cannabis family, including C. sativa and C. indica. It has been cultivated from 2800 BC onward in China. Even though largely cultivated for hemp fibers (ma in Chinese) for the production of rope, the Chinese use it also as a medicine for virtually anything: the flowers (ma-po) were used for the treatment of open wounds; the skin of the seeds (ma-len) and resin residue for the stimulation of the nervous system; the seeds themselves (ma-jen) against infections and skinrashes, being generally regarded as stimulant, restorative, laxative, and an excellent dewormer of babies and dogs. The oil (ma-yu) is used as a hair lotion and as an antidote for sulphur poisoning. The freshly pressed leaves were deemed to help against scorpion stings; and even the ash of the burnt plant has a use, improving the functioning of fireworks.

In Europe cannabis has also been cultivated down the ages in medicinal "herbalgardens" (German: Kräutergarten, Dutch: kruidentuin, French: jardin des herbes) for the treatment of mania, hysteria, delirium tremens, hydrophobia, tentanus and cholera. ("This must have resulted not only in many happy, but also dead users", Bill Drake wrote in his 1970 Cultivators Handbook of Marijuana.)

The use of cannabis plant in medical, spiritual, and industrial fields by humans has a long history. In United States the plant was once used extensively to produce fiber. The plant was usually called "hemp" in United States. However, in the 1920-1930s, the cannabis plant was increasingly used as a recreational drug, often by Mexican immigrants. People like Harry J. Anslinger and William Randolph Hearst began to work to prohibit the possession, cultivation, and distribution of the cannabis plant. They borrowed the term "marihuana" from Spanish (the incorrect spelling was presumably to show the pronunciation) to invoke racist sentiment against Mexicans. In 1937 the Marihuana Tax Act was passed and signed by President Franklin D. Roosevelt, effectively prohibiting the cannabis plant.

With the translation in Dutch of The Cultivator's Handbook of Marijuana by Bill Drake in 1972, not only did the word wiet, a sound assimilation of the English word weed, get its own lemmata in the dictionary, a new cultivation method was also introduced. With this method, through the use of the highly toxic plant enhancing product colchicine, it was possible to change the genetic make up of the plant, through which it was possible to achieve a significantly stronger hallucinogenic effect, which was later on denoted as the quality brand of skunk, or the subgenus cannabis sativa hollandica. According to tests by the Dutch government, Dutch marijuana contains roughly 400 to 500% more THC than the marijuana cultivated in the US and South America. [1]

Nederwiet (EN: Netherweed) is a song by the Dutch band Doe Maar (EN:"Just do it") which is a manual on music how to cultivate your own marijuana.

Currently, "marijuana" as a term is both used officially and colloquially for the cannabis plant in the United States. In the U.S. Controlled Substance Act today marijuana is listed as a Schedule I drug, meaning it has high potential of abuse and no medical value. However, there is a movement to downgrade its scheduling to allow medical use, since it has been reported that the plant has medical values to treat a variety of diseases. Twelve states have state law allowing medical use of marijuana, but the federal law still does not recognize the validity of these state laws.

Possession of under 500 grams of cannabis and 5 grams of hashish amounts to a minimum of 6 months in prison. Possession of over that amount is considered dealing and amounts to a minimum of 10 years in prison. However, India is a very corrupt country, and small bribes are sufficient to ensure freedom. Bhang, the leaves of the cannabis plant, is legal in all states of India except Gujarat, where it is legal only on the day of Holi. This is due to it being considered holy in Hinduism.

Although Bangladesh has signed United Nations conventions prohibiting cannabis, no law relating to cannabis has been passed.

The sale of up to 5 grammes (0.1763698 ounce) is condoned in special coffeeshops. Users are not prosecuted, unless there is a local blowverbod (EN:Marijuana prohibition) in effect for public places. The cultivation of marijuana is illegal in the Netherlands and there is an active investigation policy. The ownership of up to 5 plants is condoned, and only scarcely prosecuted. Only the cultivation of cannabis sativa for medicinal purposes is legal, but has to happen under auspicien of the government. The Netherlands currently (2007) has one legal cannabis cultivator where marijuana with high levels of THC is cultivated in a sterile environment. Medicinal use is, if prescribed by a physician, legal.

Individual use by adults is allowed, as long as no "nuisance" is caused, which means use in public places, possession of more than three grammes or sale is prosecuted. Use in the vicinity of minors is considered "nuisance" (Adaptation of the law, beginning of 2005).

The sale of marijuana is illegal, but personal use is not penalised. Agata, an organisation in Catalonia which supports breast cancer patients, is demanding legal availability of marijuana for patients who are suffering from the side effects of chemotherapy. The group was given support from all political parties in Catalonia and of the Catalan ministry of health to strengthen their demands on the government. The eventual decision is up to the minister of health.

Even small amounts of marijuana are severely punished.

Possession of small amounts of marijuana is not prosecuted in the Czech Republic.

The American College of Physicians has stated it "supports programs and funding for rigorous scientific evaluation of the potential therapeutic benefits of medical marijuana and the publication of such findings" and "urges review of marijuana’s status as a schedule I controlled substance and its reclassification into a more appropriate schedule, given the scientific evidence regarding marijuana’s safety and efficacy in some clinical conditions".[2]