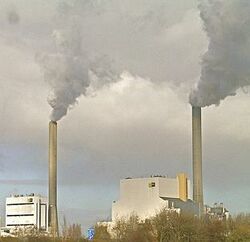 The ADMS atmospheric dispersion modeling system is an advanced air pollution dispersion model[1][2][3] for calculating the concentrations of air pollutants emitted both continuously from point, line, volume and area sources, or intermittently from point sources.[4] It was developed by Cambridge Environmental Research Consultants (CERC) of the United Kingdom (UK) in collaboration with the UK's Met Office and the University of Surrey.

The ADMS suite of models

ADMS 4 is the primary tool used for modeling of the environmental impact of air pollution emissions from existing or proposed industrial facilities. It can also be used to assess air quality with respect to the air quality standards such as the European Union Air Quality Directive,[5] the UK Air Quality Strategy,[6] the U.S. National Ambient Air Quality Standards (NAAQS) and the World Health Organization (WHO) Air Quality Guidelines.[7] Some typical applications are:

The model is capable of simulating passive or buoyant continuous plumes as well as short duration puff releases. It characterizes the atmospheric turbulence by two parameters, the boundary layer depth and the Monin-Obukhov length, rather the single parameter Pasquill class.[9][10]

The performance of the model has been validated against more than 15 measured dispersion data sets.[11]

Users of the ADMS suite of models

The users of ADMS include: