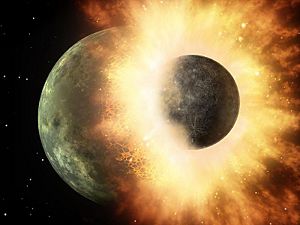 2012 doomsday scenarios sometimes depicted the Earth as being hit by another planet. Problem is: planet Nibiru doesn't exist. Scientists say if a planet was destined to hit the Earth, we could see it coming. We don't.

2012 doomsday predictions were irrational fears fueled by certain booksellers, fearmongers, moviemakers and other hucksters to encourage public panic for the purpose of making money. The hoax used dubious claims about astronomy and ancient Mayan calendars to promote nonsensical predictions regarding apocalyptic events supposed to occur on December 21st or 23rd of 2012. Doomsayers suggested there will be destruction caused by global floods, solar flares, exploding sun, reversals of the magnetic field, or planetary collisions.[1][2] Many people are scared.[3][4]

The 2012 doomsday pop culture phenomenon was similar in many respects to the "Y2K" phenomenon which marked New Year's Eve in 1999, when the new millennium happened. The hysteria has also been compared to the panic created by Orson Welles radio program War of the Worlds. But the "2012 apocalypse business is booming", according to the Huffington Post. The 2012 doomsday prediction was one more example of a patten repeated over the centuries; for example, Baptist preacher William Miller convinced perhaps a hundred thousand Americans that the second coming of Jesus Christ would happen in 1843; it didn't. Doomsday predictions tend to be within the span of about ten years from the present, according to University of Wisconsin historian Paul Boyer, since the sense of "imminence" and that it will "happen soon" is necessary for these hysterias to catch the public imagination.[3] 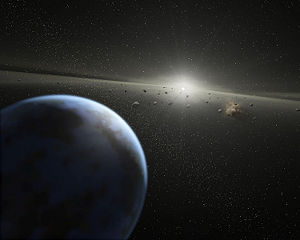 Planet "Nibiru" doesn't exist except in the minds of believers of disaster scenarios such as 2012.

What characterizes the current doomsday phenomenon is how it was built around the ancient Mayan mathematical calendar. A reporter for USA Today wondered "how the ancient Maya got dragged into all this?" Mayan calendar systems were complex and circular; Mayans believed every 25,000 years or so that "time would come to an end and would start over".

This factoid enabled pseudo-scientific "scholars" such as John Major Jenkins, who drew attention to the Mayan calendars, to reportedly jump-start the hysteria craze. It is not clear whether Jenkins is, in fact, the originator of the hysteria, but clearly he was one of the originators of speculation concerning the Mayan calendars. Jenkins is not a trained archaeologist but is a "self-described Maya scholar" who became convinced that there will be a galactic alignment of the Earth, sun and Milky Way on or near December 21, 2012. His book Maya Cosmogenesis 2012, published in 1998, claimed that the Maya predicted this alignment. Jenkins suggested that this alignment might have some kind of "transformative effect on Earth". His publishing success led to more books.[1]

In 2006, the book 2012: The Return of Quetzalcoatl sold thousands of copies each month, and helped build the idea of 2012 as a doomsday year into a kind of pop culture phenomenon. It built on popular interest after Mel Gibson's film about the Maya civilization called Apocalpyto. Successful book sales led to imitators; within a few years there were several books on the market dealing with the theme of 2012 being the year of the apocalypse. The books built on superstition that somehow the Maya's "Long Count" calendar marks the end of a 5,126-year era, and suggested that this calendar was somehow able to predict events far into the future.[7]

A few of the books were:

As the pop culture fear-mania kept growing, people who fueled this speculation saw that they could make lots of money by writing books or making movies. A bandwagon effect emerged. A senior religion editor at Publishers Weekly, Lynn Garrett thought the 2012 buildup echoed excitement and fear similar to the mass hysteria experienced on the eve of the new millennium known as "Y2K". To make money, publishers seem to be "courting readers who believe humanity is creating its own ecological disasters and desperately needs ancient indigenous wisdom." The appeal of the "earth religions" resonates with concerns about the environment.[7]

The popular hysteria fueled by unscrupulous doomsday sayers seem to have kept growing despite the efforts of scientists to check it. Scientists see the 2012 doomsday scenarios as a "complete fabrication" and a chance for many people to cash in on the craze. There were no connections between the ancient Maya and contemporary spirituality. Maya civilization flourished for centuries between AD 300 and AD 900, and disappeared mysteriously, but Maya excelled at math and astronomy and developed a way to track time called the "Long Count calendar" which was discontinued during Spanish rule. But the end of a 5,000 year cycle was not a way to forecast the end of time, but rather was a marker indicating a cause for celebration.[7]

Anthropologist Susan Gillespie from the University of Florida wrote:

By November 2009, the hysteria was inflamed by movies and books on the subject: what will happen on December 21, 2012? A reporter from the Dallas Morning News predicted that 2012 would have a "carnival" type feeling that it was "Y2K" all over again, and explained:

There were shows on the cable television History Channel about 2012 speculation. 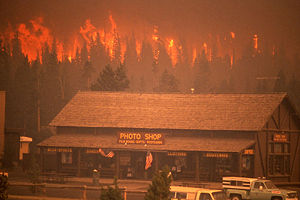 One disaster scenario features explosions and fire at Yellowstone National Park. This is a photo from a forest fire in 1988; they occur naturally during droughts.

To promote the movie, Sony Pictures set up a "fake website" called "The Institute for Human Continuity" which was "crowded with scientific-sounding content about the coming end of the world" which "encouraged people to sign up for a lottery to be 'saved' before the end". By 2009, total sign-ups numbered (supposedly) 14 million.[1]

But evidently, despite the movie being a movie, some people have been described as "scared". There have been errant beliefs that the Mayan calendar supposedly "runs out" on December 21, 2012, but a Mayan Indian elder insists that this is not the case. But panic has caused astronomers to get e-mails from fourth graders saying "they're too young to die." But archaelogists, astronomers, and Maya Indians say the only thing likely to hit Earth is a "meteor shower of New Age philosophy, pop astronomy, Internet doomsday rumors and TV specials such as the one on the History Channel." There were reports that the numbers of books about 2012 numbered into the hundreds.[6]

Lorne Dawson, an expert on doomsday cults and a sociology professor, explained that belief in a doomsday cult can provide "hope, inspiration, satisfaction" to people who haven't quite succeeded in life.[9]

What has caused the panic? At an obscure archaelogical site in southern Mexico during the 1960s there was a stone tablet found which had the equivalent of the date 2012 on it. The barely legible inscription describes something that is supposed to occur in 2012 involving a mysterious Mayan god named Bolon Yokte who is associated with both war and creation, but the end of the passage is "almost illegible." An archaelogist from Mexico's National Autonomous University interprets the last eroded glyph as saying "He will descend from the sky."[5]

The panic is a "booming business" which has led people to buy survival kits, and watch documentaries and buy books on the subject. There are countless web sites adding to concerns. There are reports that some teenagers were considering suicide because "they didn't want to be around when the world ends", and women considering killing their children "so they wouldn't have to suffer through the end of the world."[3]

Conspiracy theorists add a new twist to the hysteria by insisting that world governments and those "in power" know about the impending disaster, but do nothing to save us. Such theories are easily spread by web sites on the Internet which don't have reputations to uphold, or to have to account to colleagues, unlike the scientific or academic world. Rather, web sites can say whatever they wish if it encourages more people to visit their site. Benjamin Radford of the science magazine Skeptical Inquirer wrote: 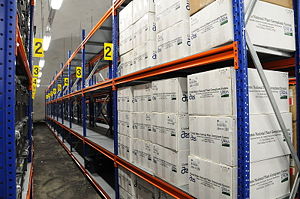 Norway's Svalbard Global Seed Vault stores millions of seeds in airless frozen chambers underground to protect seeds which might be destroyed in a natural disaster.

Some actions by governments have not helped end the hysteria. For example, the government of Norway in 2008 opened a "seed vault" to protect seeds in the event of a natural disaster such as an earthquake or nuclear strike which is dug "deep into the permafrost" and stores 4.5 million seed samples from around the world to shield them from climate change.[11] The Svalbard Global Seed Vault built the facility for $9 million and allows other countries to store seeds for free, and withdraw them upon need, and has giant air conditioners to keep seeds frozen so they can last for 1,000 years. The vault is designed to withstand earthquakes. But actions like Norway's can be interpreted by conspiracy theorists as "evidence" that governments know about the doomsday scenario, and are preparing for it.

But the hysteria is affecting many people. ABC News reported that a man named Patrick Geryl from Belgium quit his job and founded a "survival group" to cope with the "catastrophe that he knew was coming." He got water purifiers, dust masks, vegetable seeds, wheelbarrows with spare tires. Why? Geryl explained: "You have to understand, there will be nothing, nothing left ... We will have to start an entire civilization from scratch." Geryl is planning to buy a plot of land high up in the mountains of Africa to withstand the "monstrous tidal waves" and wait out the "volcanic dust" which will block out the sun.[4]

Scientists try to calm the hysteria

Essays in The New York Times tried to debunk the hype and hysteria, quoting scientists from both the United States and Europe as saying the fears were groundless. Essayist Dennis Overbye asked "How often do you have a pair of such blue-ribbon scientific establishments assuring us that everything is fine?" referring to the United States National Aeronautic and Space Administration (NASA) and the European Center for Nuclear Research (CERN).[6] Scientists were trying to allay concerns that "a black hole would be spit out of its new Large Hadron Collider and eat the Earth."[6]

Astronomers say it's all "bunk". Ed Krupp, director of the Griffith Observatory in Los Angeles said:

Writer Anne Hill in the Huffington Post wondered why the Maya couldn't predict their own demise.[12] In her essay in 2009 entitled "Why 2012 Predictions are Really Stupid", Hill wrote: "I simply cannot believe that in three years the Mayan calendar will fall off a shelf and change the world as we know it." The Mayan civilization disappeared around 900 AD and there has been no definitive account of why this happened, and no evidence that the Mayans could foretell their own civilization's collapse.[12] 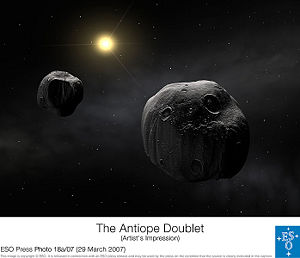 In the past, large asteroids have hit the Earth, but they've usually broken up by friction from the earth's atmosphere long before they hit the earth.

Astronomer David Morrison was getting 20 letters and e-mails daily from "people as far away as India" who were "scared out of their wits", and he described himself as angry that "people are being manipulated and frightened to make money ... There is no ethical right to frighten children to make a buck." Morrison tried to explain the hysteria in this way:

Further, reports suggest that unethical doomsayers have seriously distorted what the Mayans believed. There is no evidence the Mayans thought anything special would happen "when the odometer rolled over on this Long Count in 2012".[6]

What's happened, according to one report, is that scientists are becoming alarmed at the 2012 alarmism. The U.S. National Aeronautical and Space Administration or NASA has denounced the whole 2012 hysteria phenomenon as an "Internet hoax" on its website.[1]

Further, present day Mayans, descended from the ancient Maya, are growing tired of the phenomenon. Mayan elder Apolinario Chile Pixtun is "fed up with this stuff" and is reportedly "tired of being bombarded with frantic questions about the Mayan calendar supposedly running out on December 21, 2012."[13]