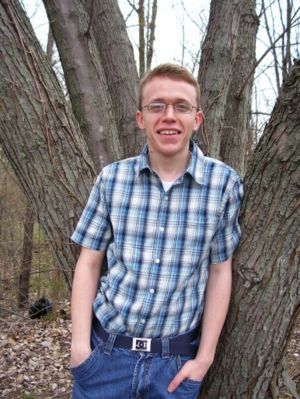 Senior photograph, 2007; my mother hates this photograph and prefers this one

I was born on April 26th, 1989, in a little town in Illinois, and lived in Ohio for the majority of my childhood. In seventh grade, my father was the teacher of a fifth grade class at my academy, leaving me with much time on my hands to wander the halls after school. It was during this time that I discovered my interest in computers. My computer teacher, who had been mainly teaching typing classes, introduced me to the Adobe GoLive HTML editor. I spent countless hours learning how to use the software, and eventually how to code the HTML myself. My love for computers has only grown since, and I have broadened my horizons to such areas as low-level programming, interpreted languages, operating systems, hardware, and much more.

My work here at the Citizendium is primarily open source software, but you will occasionally see my edits in other areas, such as the Peanuts cartoon strip articles.

I run Ubuntu Linux, or that's what it started as, anyways (I've since morphed it into something completely different, save the package manager), and I'm running KDE3.5. Some of my favorite apps are Amarok, k9Copy, flac, nano, finch (formerly known as gaim-text), lynx, and Firefox. Oh yeah, and I love vim!

I'm running an AMD AM2 x2 3800+ at stock speeds (I'm a wuss =P), 1GB of Corsair DDR533 value RAM (hoping to upgrade to 2GB XMS someday), a 400GB Seagate Barracuda, a 16x Asus DVD-RW drive, an eVGA 7300GT, and I've got lots of funkedelic lights which I never use because I find them distracting. Sitting on top of my case is an official Tux the penguin doll (see photograph here). I also recently acquired a very nice 19" 16:10 LCD monitor by LG.

I love The Beatles. I listen to almost everything except rap and metal. One of my favorite groups is The Wreckers.